Although I haven't nailed many killer shots in my opinion, 2018 has probably been my best birding and bird photography year so far.

Here's a quick list of my birding achievements in 2018:

I've never been birding from a boat before and this year I did my first 'pelagic' trips:
I've also been to Mull, Minsmere, East Yorkshire, Dumfries and Galloway.

I've had a few flops including the Ospreys at Horn Mill Trout Farm in Rutland and one of the Liverpool Bay trips, but on the whole not a bad year's birding - here's to some more adventures in 2019 with the following possibilities:
Other targets:
And desperately wanting ...

Posted by GeekTeacher at 11:38 No comments:

With my wife Sarah now working as a paramedic doing 12 hour shifts on Christmas Eve, Christmas Day and Boxing Day and my two kids having left home, I had nothing else to do today except go birding.  I decided it would be nice to try again for the Kingfisher and Bittern at Sprotbrough Flash near Doncaster as the roads would be clear for the 90 minute drive there and the hides would hopefully be empty. 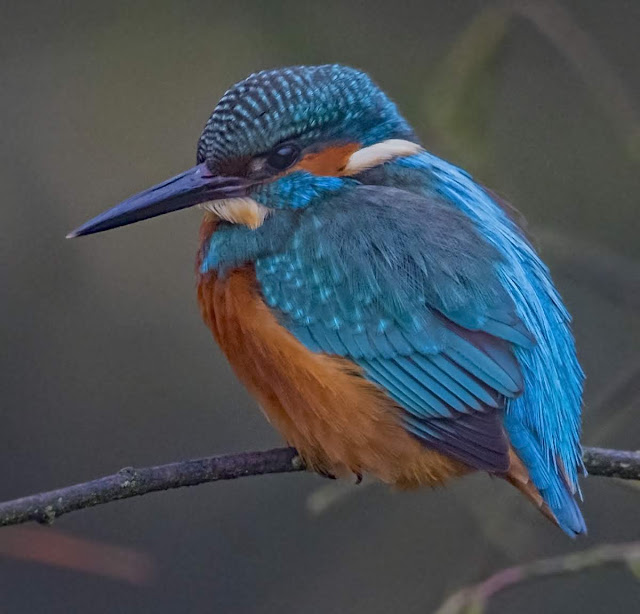 I set off in dull, overcast conditions and by the time I reached the high point on the M62 over the Pennines, the visibility was down to about 20 metres due to fog.  My hope was that it would clear up as it so often does when I go over the top here and descend into Yorkshire proper.  And indeed, it pretty much did that, with the conditions being almost sunny as I reached the A1 for the final push to Sprotbrough. 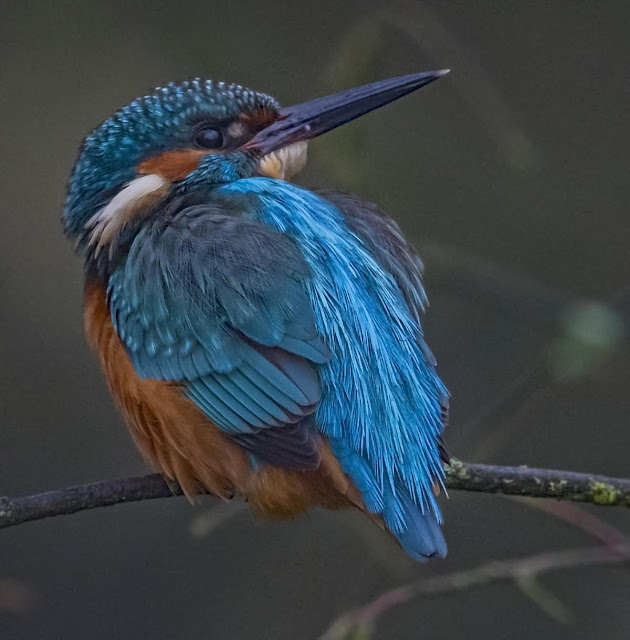 When I arrived at around 9:15am I was very surprised to find several cars on the small car park - these dog walkers get everywhere, even on Christmas Day! And thankfully there was also one person in the hide when I reached it because he immediately put me on to this Kingfisher which was perched in the dark dell to the left. 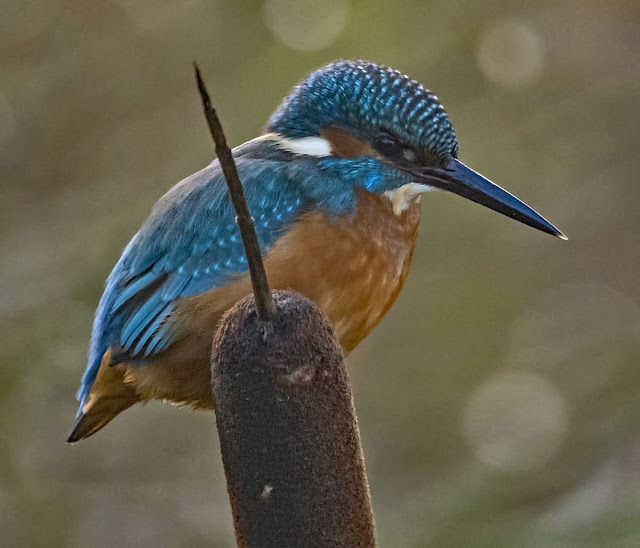 I hurriedly got my camera out and fired off a few shots before it flew off - no time to change the teleconverter or adjust settings much, so these were all shot with at an unbearable 3200 ISO because it was still on an automatic setting.  With a perched bird like this I would have tried to lower the ISO manually to at least 1000 and possibly 800 to suit the dark conditions. 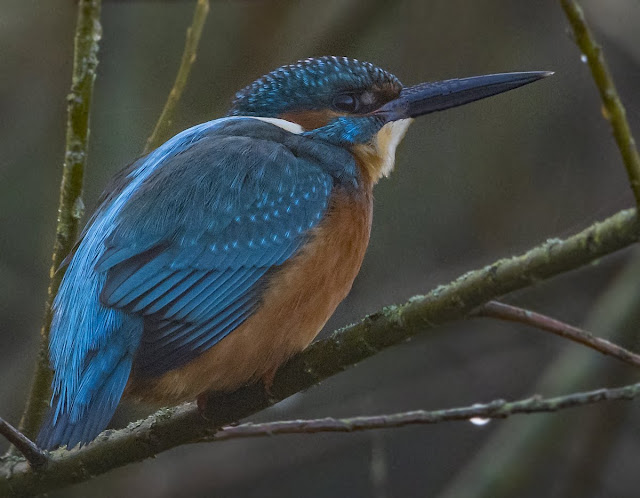 The first guy left (didn't get his name) and I was soon joined by Paul Langley with whom I had a long conversation whilst taking a few more shots of the Kingfisher which by now had moved in front of the hide but in a position covered by branches.  The shot above has been 'Photoshopped' to remove a twig going across its beak - can you tell?

Around 30 Gadwall had gathered on the Flash today and it was great watching and listening to them feed en masse  giving me the impression of the sound of running water. There were also many Cormorants, Black-headed Gulls, Mallards, Tufted Ducks and a single Great Crested Grebe on the water.

Later Jo Webster joined us - I had met Jo before at Sprotbrough when we were trying unsuccessfully to photograph a Waxwing which had been feeding regularly on cotoneaster berries in a suburban street - the bird never showed whilst we were there and all I got was a Blackbird.

We all had a good chat together and Jo soon put us on to a fast moving Water Rail which she had found to the right of the hide.  Water Rails usually skulk around the reeds and this one was no exception - all I managed to get was its head. 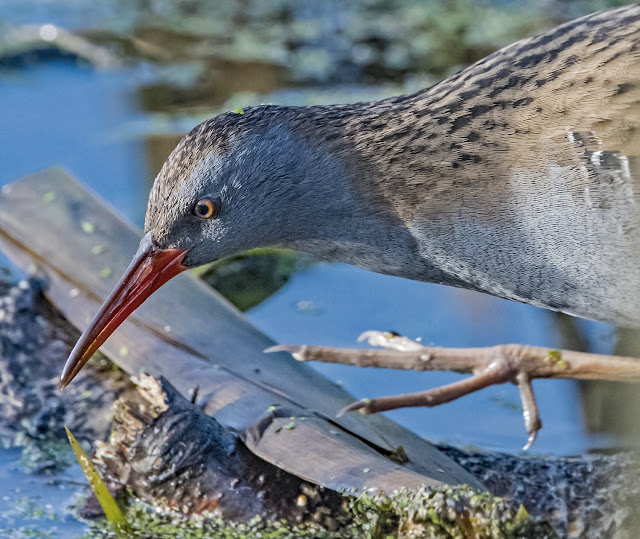 Later we were joined by Ian Unwin who came and put some more seed down to bring in the woodland birds which included Blue Tit, Great Tit, Coal Tit, Dunnock, Robin, Blackbird and Reed Bunting. 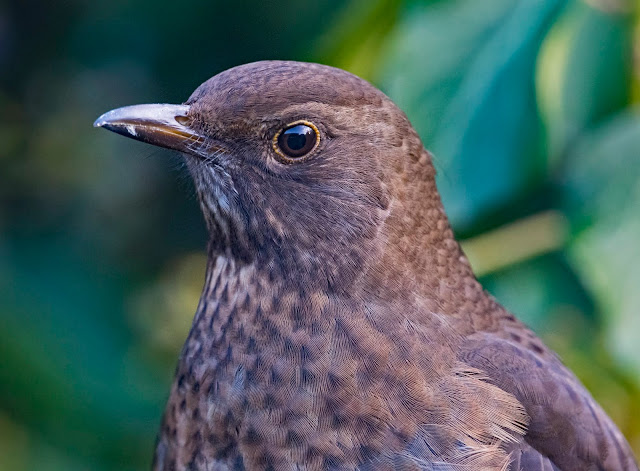 Just before I left I spotted a redhead Goosander sailing past us for a short while before it flew off. Unfortunately, the Bitterns didn't show at all whilst I was there today.

Following Ian's excellent directions, I called in at the Adwick Washlands RSPB reserve for a reccy for future reference.  Not much there of note today except Gulls, Wigeon and a few woodland birds, but it looks like it could be very productive at the right time and I know a redhead Smew was there last year.
Posted by GeekTeacher at 22:42 No comments:

A Quick Return to Lunt

It always surprises me when what I regard as a rather run-of-the-mill photograph gets lots of likes on Facebook, especially when I don't think the shot is that good.  I took this photo of a Kestrel from Lunt Meadows in Merseyside whilst I was waiting for a Short-eared Owl to show and it's had a total of nearly 1000 likes in various groups on Facebook to date. 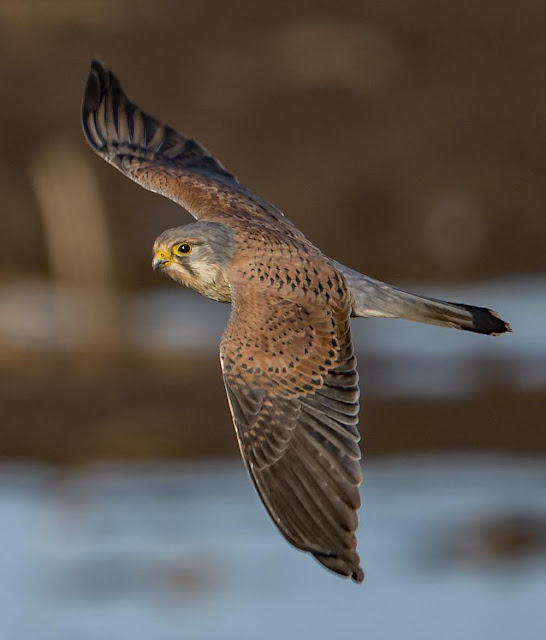 Gary Clarke, Denis Eagling and I were standing on the River Alt embankment looking down on to a farmer's field over which the bird had been hovering in a few places.  This Kestrel will be the same bird as I photographed a couple of days ago and this must be its territory.

We decided to get a little closer for a better shot because our height on the embankment brought us to almost eye-level with the bird at times. However I was at the back of the queue and, as Gary and Denis approached, it flew past them and towards me, enabling me to get this shot.  I don't think it's quite sharp enough and there's not enough depth of field, but I guess the angle and pose make the shot quite pleasing. 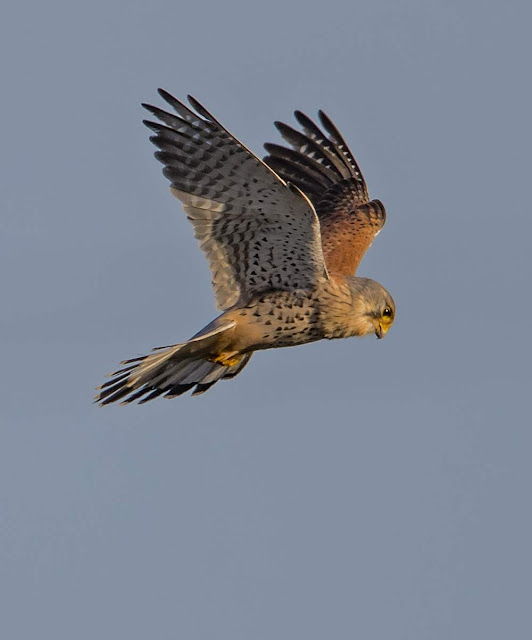 I didn't really get close enough to the Owls today, so all my shots are heavily cropped which increases their lack of sharpness.  So the quest for that killer Short-eared Owl shot continues ... 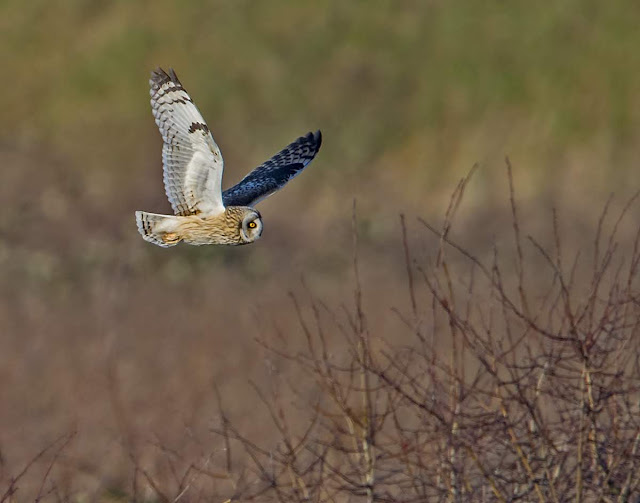 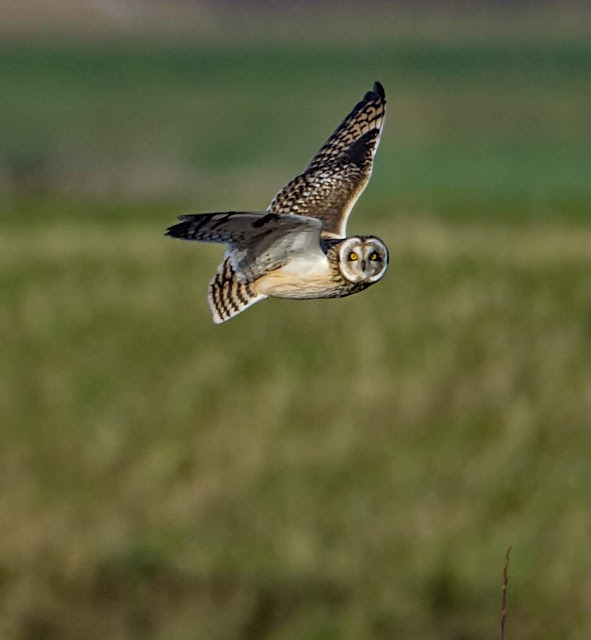 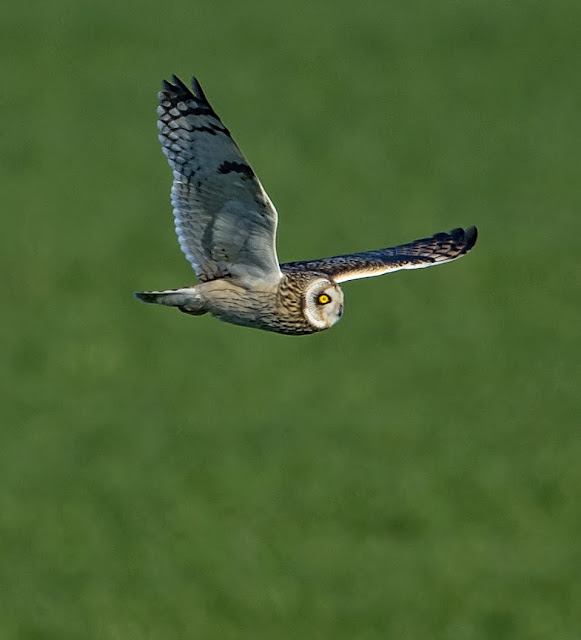 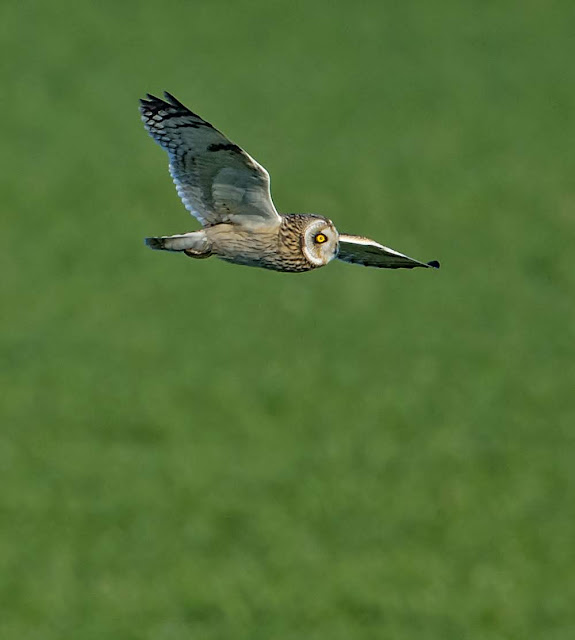 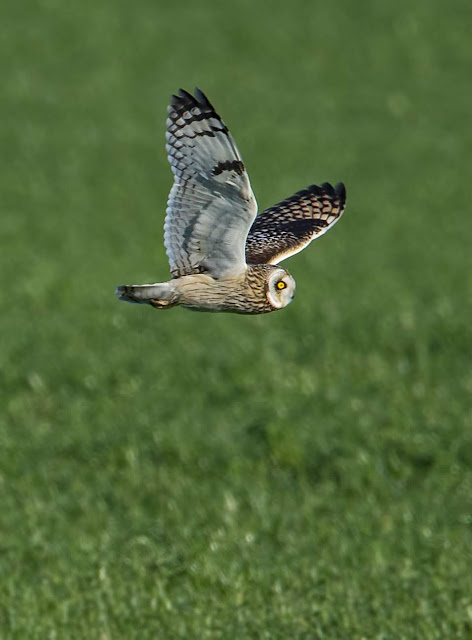 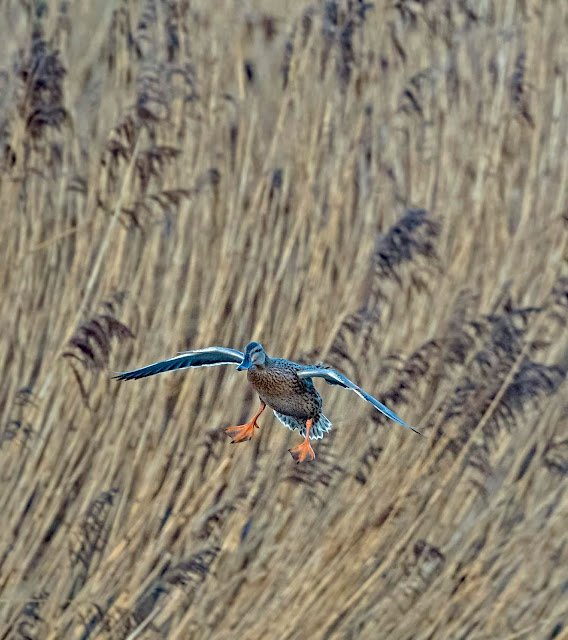 Posted by GeekTeacher at 09:08 No comments:

In Search of Shorties at Lunt Meadows

In the not so distant past Lunt Meadows has provided some of the best Short-eared Owl photo opportunities in the North West, with people coming a long way to try for some good shots.  In the last couple of years it hasn't been so great, with seemingly fewer birds stopping over.  The prospects for this season had been looking as if it might be another good year, so off I went in search of Shorties.

After standing around for a couple of hours in a place where an Owl had been recently seen, all I taken was this shot of a Little Grebe hiding in the shadows of the banks of the River Alt. 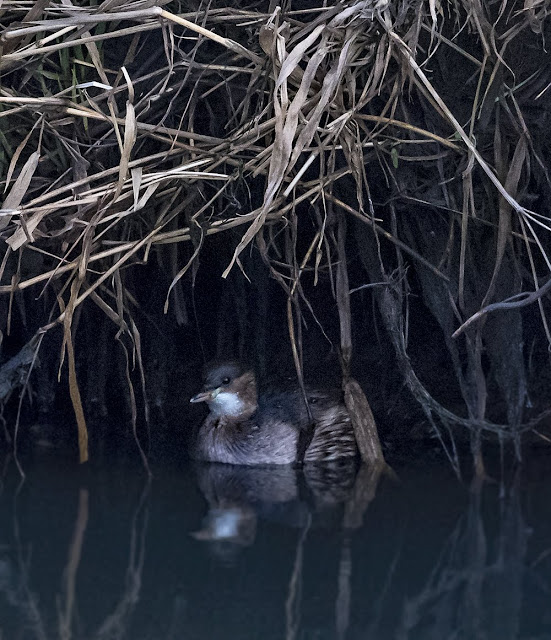 An hour or so later there was still no Owl, so my thoughts turned to other things whilst I was waiting in the freezing cold.  This Little Egret flew past and so was a prime target. I'm told that Little Egrets used to be very rare in the UK although they've always been quite easy to see since I've been birding. They first appeared in the UK in numbers in 1989 and first bred in 1996. 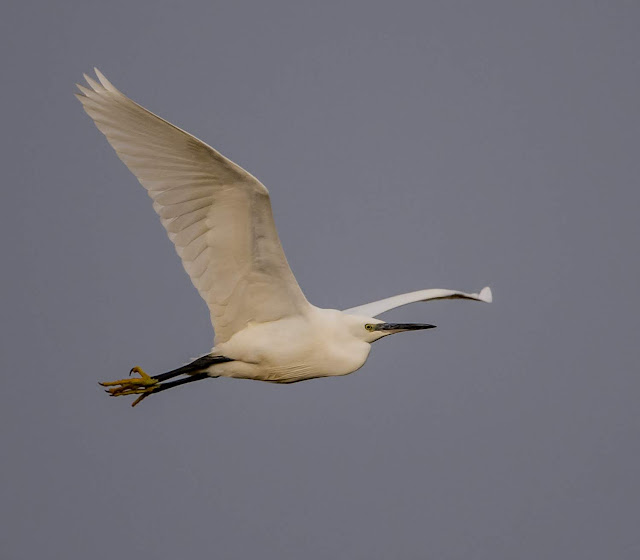 Nowadays we hardly look twice at them when once they would have been highly twitchable. The same is also happening to Great White Egrets and Cattle Egrets too, and one day they may be as common as Little Egrets on the north-west coastal reserves and estuaries. Whatever next, Spoonbills? They are breeding successfully in Yorkshire. Some rather unusual light in this shot, probably enhanced by the out of focus background.

Lunt Meadows are a great place to photograph Kestrels and if the opportunity arises I will always take it.  Such a great bird to capture in flight. 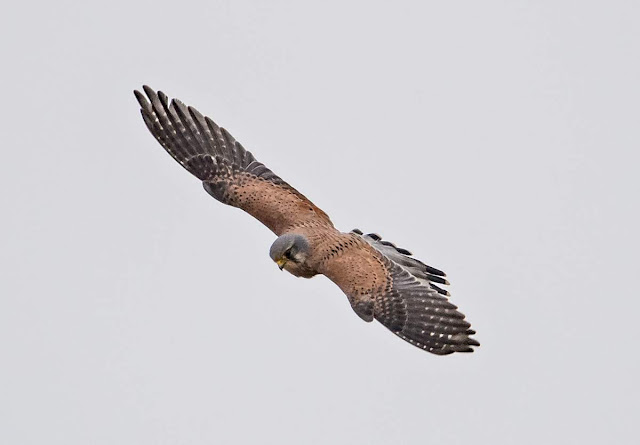 Kestrels make a great portrait shot even when they are sitting on a man-made object. 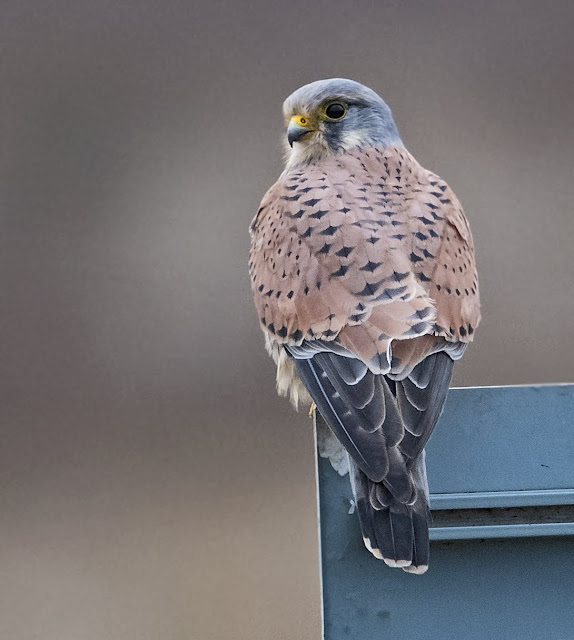 It was great to see a family party of Mute Swans flying past, but I wish it had been an Owl. 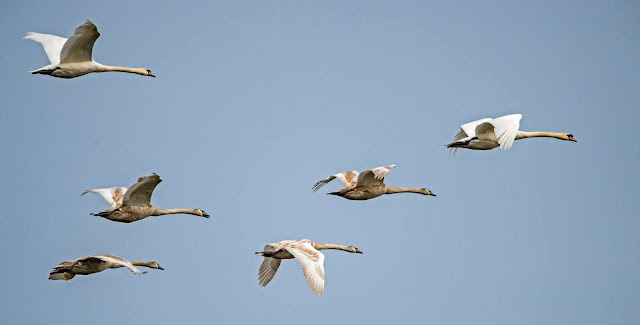 I'll finish with a shot that I'd normally delete - there's something about this habitat shot that I like because it sort of sums up Reed Buntings.  No Owls for me there today then. 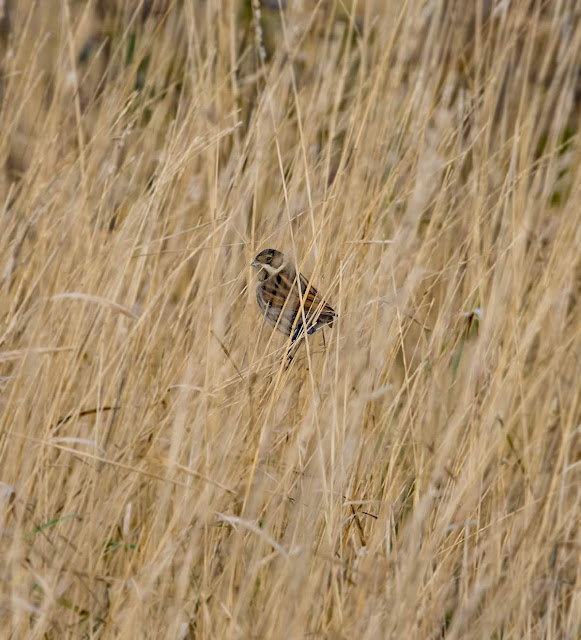 Posted by GeekTeacher at 19:21 No comments:

I Made It Into Print Again 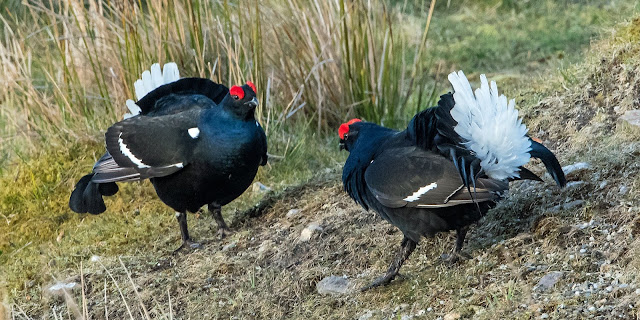 Today I received my complimentary copy of the North-East Wales Bird Report 2017 which features this Black Grouse lek photo of mine in it which was taken at Minera near Llangollen last year.

After a quick flick through the pages I can see that I'm in good company there with a few people I know in person or though North Wales Bird and Wildlife Sightings Facebook group including Mel Hughes, Dave Williams and Tony Pope.

North-East Wales is a beautiful area which I visit on a regular basis as it is only an hour and a half from home. The report will make interesting reading and I'm sure I'll find a few new places to visit.
Posted by GeekTeacher at 11:30 No comments:

Publish And Be Damned!

Another one of my photos has cropped up in a BirdGuides news article about the possible reintroduction of White-tailed Eagles to the Isle of Wight. In fact it's the one I use for my cover photo on my GeekTeacher.Birding page on Facebook. 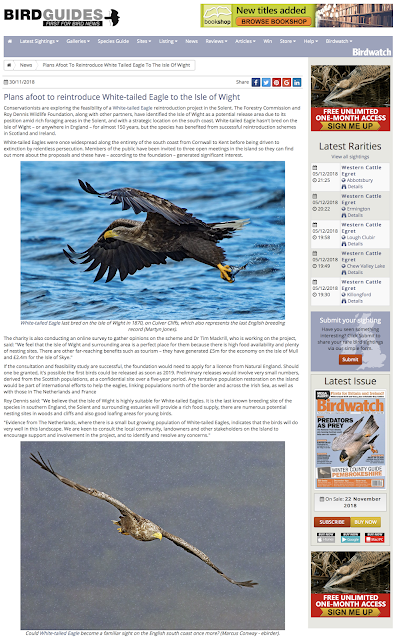 And just for interest, one of my Brambling photos has been used as the backdrop to a double-page spread entitled 'Beech Boys' in the December issue of BirdWatch Magazine pictured on the lower right side of the image above with the actual page shown below.  The title is a reference to the fact that Brambling feed mainly on beech mast (nuts) when they can. 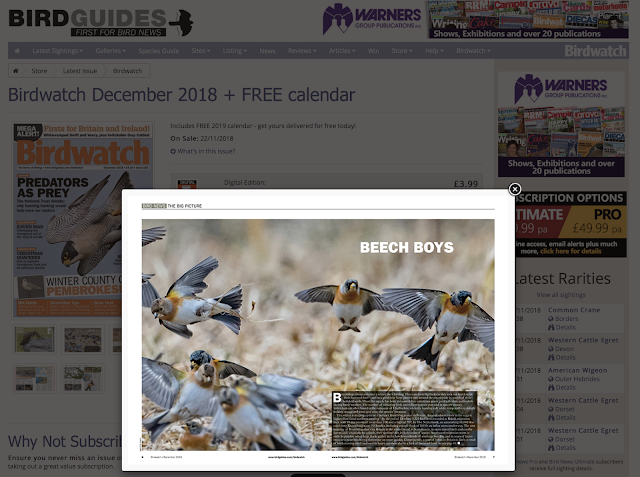 Of course, I had to buy a copy, even though I don't think they've used the best photo or positioned the one they used as well as they could have, but at least I got paid for that one!
Posted by GeekTeacher at 22:39 No comments: