Grey Heron Over My Back Garden 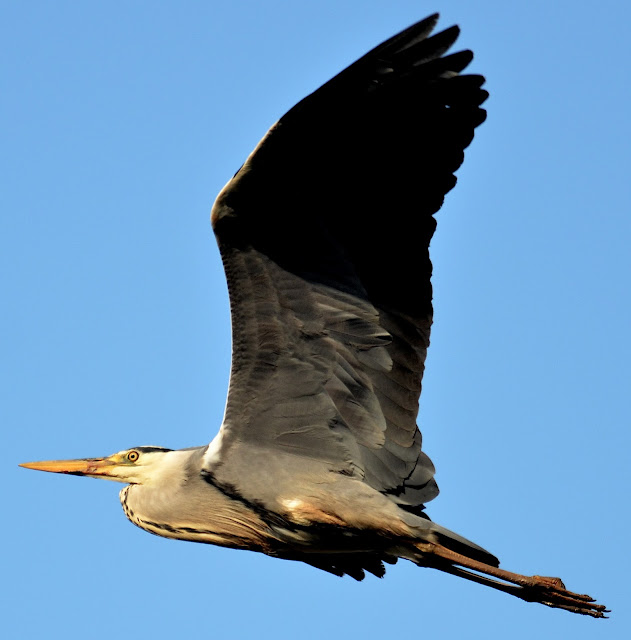 A Grey Heron is seen quite quite frequently over our housing estate in Tyldesley, presumably looking for expensive fish in garden ponds.  Sometimes I see it on a neighbour's rooftop peering down into their back garden and occasionally over the rough ground on the edge of the former railway line where there is an ephemeral pond close to my feeding station. 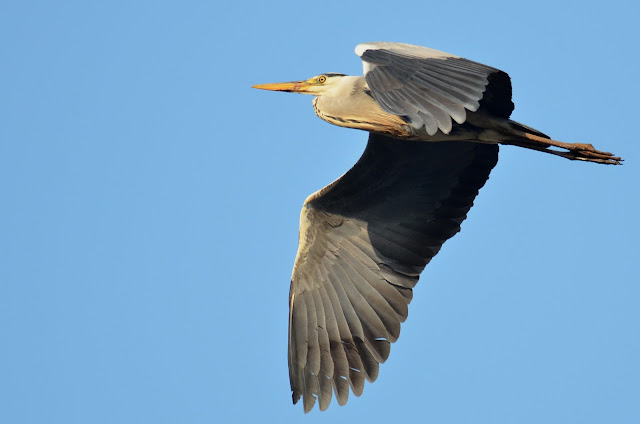 But tonight it flew low down over my own back garden and I just happened to have my camera handy to get these shots.  Even though they're such a common bird, I love photographing Herons, both on the ground and in flight.  It's always a challenge to get some good eye and feather detail. 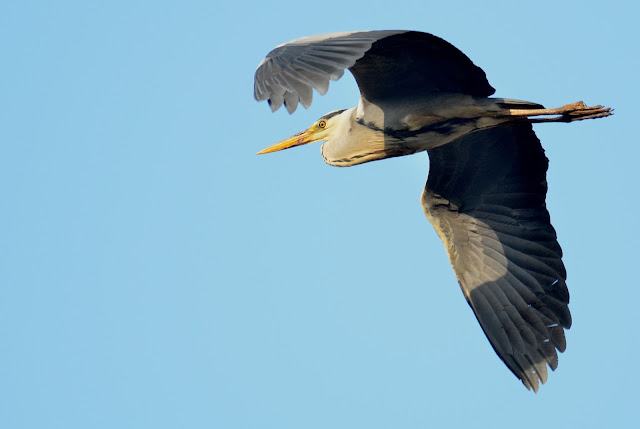 I've got sharper Heron photos, but not taken flying low over my own back garden.
Posted by GeekTeacher at 12:07 1 comment:

Grey Partridges are skittish things and very hard to photograph as they skulk around in the long grass and vegetation only occasionally raising their heads.  I've seen them in ones and twos a few times in the Astley Moss and Rindle Road area, but as soon as they see you they're off and so it's not surprising that I've never managed so much as a record shot until now. 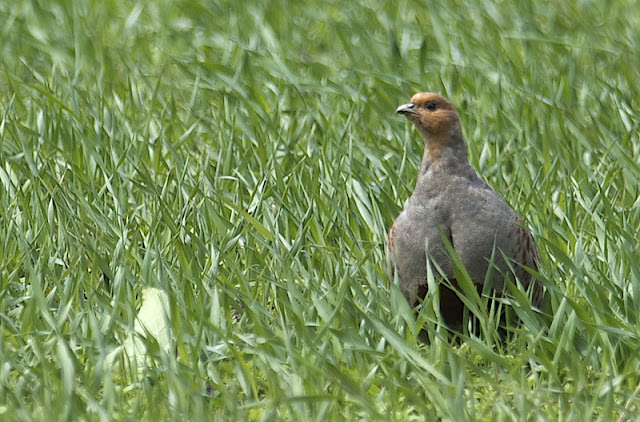 I know it's not the best of photos, but it's the best I've got so far of this elusive bird.
Posted by GeekTeacher at 16:30 No comments:

I got a couple of 'Lifers' today at Penny, Black Tern and Garganey.  I also spent a long time trying to get a decent shot of a Swift, as there were thousands of them today over the water - a fantastic sight.  Here's the best of what I got, but as usual, I'm not really satisfied with any of them.

Unfortunately the two Black Terns were much too far away for photos.
Posted by GeekTeacher at 23:49 No comments:

Today was my first birding trip to Lyme Park, with target species of the Pied Flycatcher and drake Red-crested Pochard which had recently been reported here. Almost immediately I saw the latter on the pool just inside the entrance gates (Disley Dam), and so I stopped at the kiosk and walked back to take some photos. It was associating with two Mallards and, after a brief squabble, all three birds took off and circled the pool before landing again on the far side.

Also present here was a Grey Heron, some Coots and Canada Geese, two of which had six chicks. I could also hear Chiffchaffs singing from the nearby trees.


Then, after I had parked on the main car park and was walking towards Crow Wood, I saw another drake Red-crested Pochard in amongst the Mallards on the Mill Pond, which was probably the same bird I'd seen earlier. It seems very tame and I believe it comes for bread, but it's still worthy of a photograph or two.

I wasn't quite sure of where to go in Crow Wood, particularly as it has an adventure playground at one end, but I soon made my way through the screaming kids and on to a woodland path. I found a spot where there were a few bird boxes around and within a couple of minutes had found a female Pied Flycatcher.


I then carried on along the path towards a cattle grid and gate overlooking some fields, and in the trees to the left of the path I spotted a Redwing, much to my surprise. I ventured off the path in to the trees to get some photos, but the bird was very elusive.

I also saw a Willow Warbler, a Swallow, a Wren, a Robin, some Blackbirds and Blue Tits around here, as well as the ubiquitous Jackdaws and Crows. I walked up to the top of the hill and then circled back down to the path without seeing very much else.

Desperate to find the male Pied Flycatcher, I took the path down to the stream below the playground and was about to try a different fork in the route when I heard a bird calling. I wasn't sure what it was but it soon proved to be the glorious black and white male bird.

I spent over an hour and half trying to get some shots, but at best they're only half decent as it moves quickly and the autofocus is often confused by leaves and branches - I may return to this spot later for another go, particularly as I didn't see a single Treecreeper or Nuthatch today.


Mission accomplished, I set off for home quite contented.

Posted by GeekTeacher at 21:38 No comments:

Boy, when I set off for Carrington Moss this afternoon did I NOT know what a can of worms I'd open today. I got a text from Ian McKerchar about a Blue-headed Wagtail in field 187 and thought that it would be a nice little afternoon jaunt over Warby Bridge towards Dunham Massey. I found the place OK thanks to the field number and the map and even got a good place to park, but then the wait began.

For well over an hour and a half I paced up and down the public footpath alongside the ploughed field with my scope and bins with nothing to see on the ground but four Wheatears, two Pied Wagtails, two Skylarks and a number of Chaffinches flitting around. There was also at least one Chiffchaff singing away in the woods at the end of the field. Whilst I waited I took some photos of the Wheatear, one of which came quite close, but the light wasn't good for most of the time and the wind kept whipping up mini-sandstorms along the path. 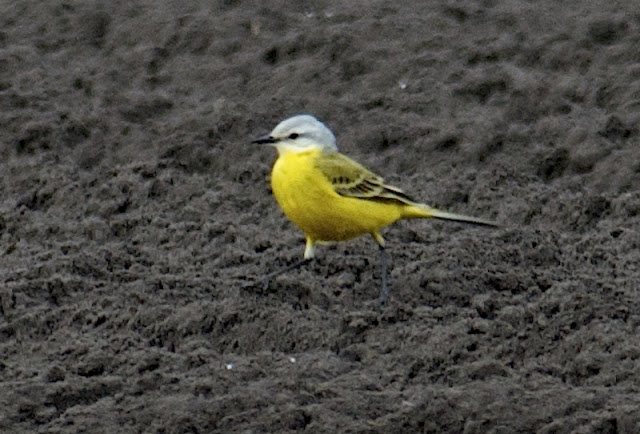 And then I saw a flash of yellow in the distance, and I'd cracked it, or so I thought - the bird had appeared and was busy running up and down the furrows, with a Pied Wagtail in tow for some reason. The bird was well over a hundred metres away and so although I took loads of photos, none of them are any good. Here's the best of what I got: 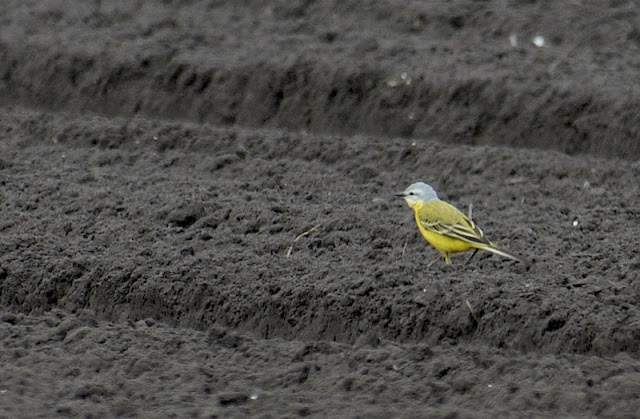 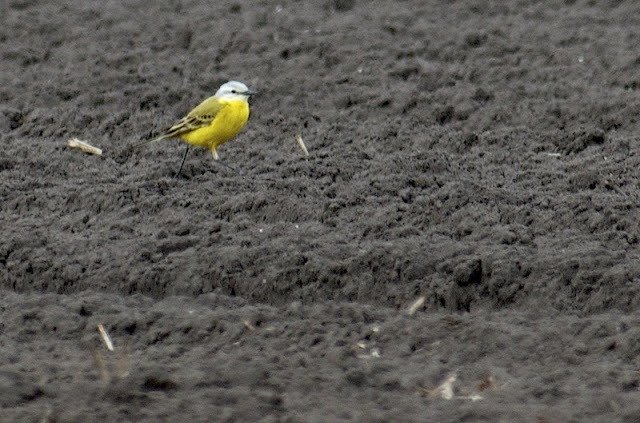 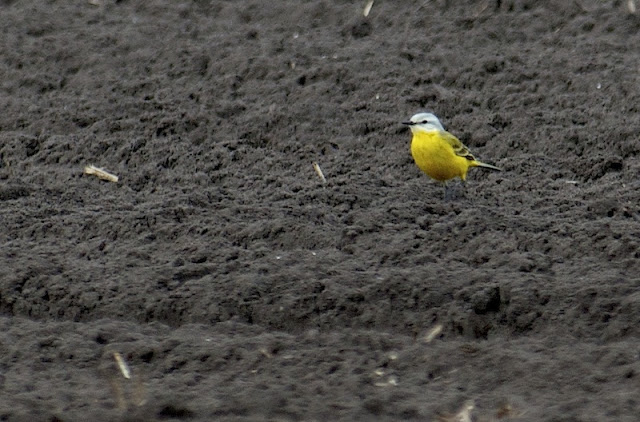 Anyway, satisfied I found the bird on my small twitch from Tyldesley, I walked back to the car and was about to set off for Dunham Massey Park in search of woodpeckers, when James Walsh arrived with his mate Sean. I told him I'd seen the bird and got some photos, but it had now disappeared. Just before I showed him the record shots on the back of my camera, he asked me if it was a 'Channel Wagtail' - wha????  I knew nothing about this 'issue' and so James kindly explained about some of the numerous Wagtail races including  Motacilla flava flava, Motacilla flava flavissima and Motacilla flava x flavissima or 'Channel Wagtail'! - see what I mean about the can of worms? 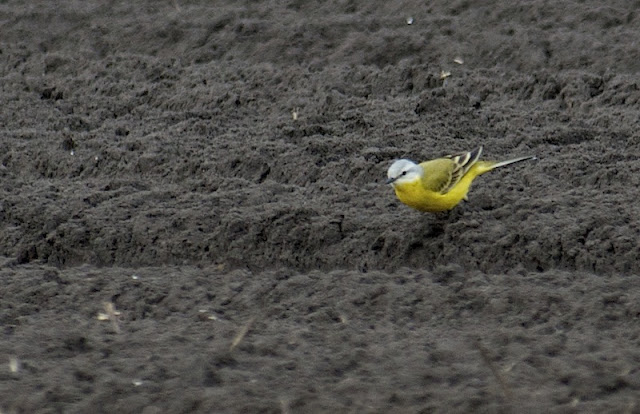 After looking at my photos several times, James thought that this bird wasn't the Channel Wagtail he'd seen recently and said it was 'probably' a Blue-headed Wagtail - good enough for a novice like me, but it you want to join the debate, look at my crappy record shots above.  Nice to meet James and Sean, and Tim Wilcox cycled in to join us just before I left.

P.S. I've since read Ian's excellent article on the Manchester Birding website about these birds and also the previous discussion posts in this forum, and so I'm now a lot more enlightened - thanks chaps.

Posted by GeekTeacher at 20:32 No comments:

Sedge Warbler at Doffcocker - Another Lifer! 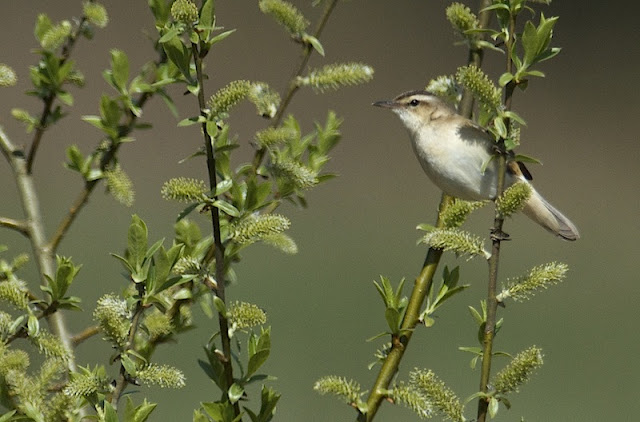 I've finally nailed some record shots of a Sedge Warbler at Doffocker Lodge in Bolton today. They're tricky little birds to photograph, because they either hide deep in the reedbeds or flit about very quickly giving only brief glimpses. 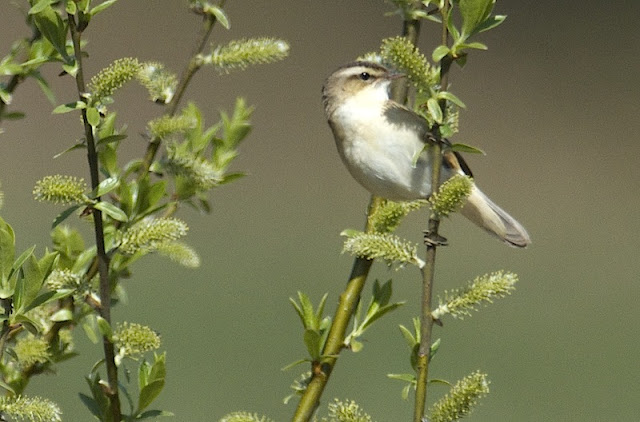 There's generally no problem in knowing they're about though due to their distinctive call - it's quite different to the Reed Warbler which often occupies similar habitat - but getting a decent photo is another matter. 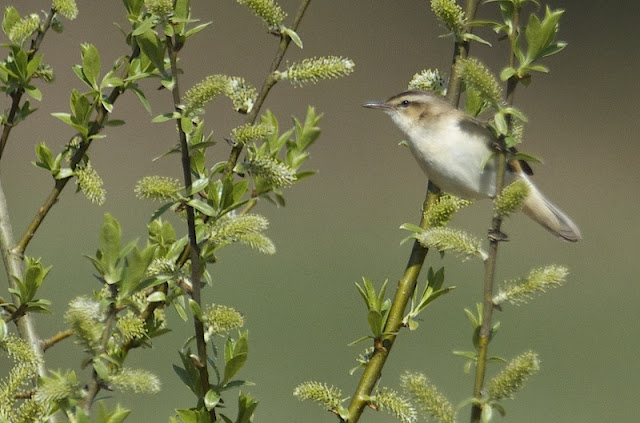 Anyway, here's what I got today, only record shots but good enough for now ... 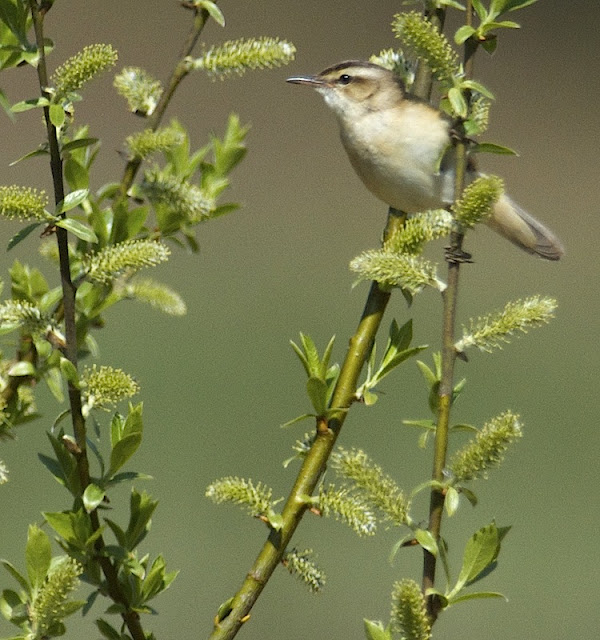 Posted by GeekTeacher at 20:24 No comments: 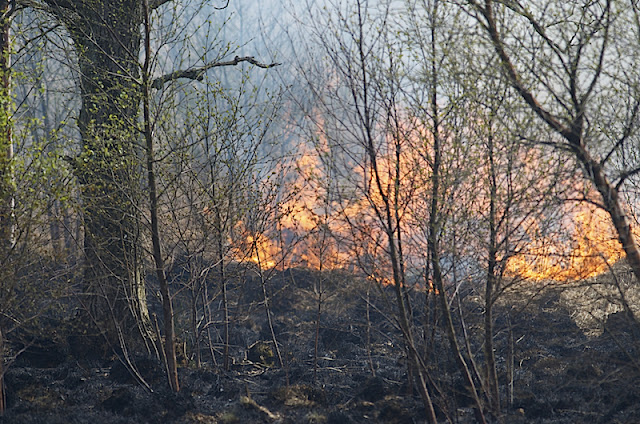 I was doing some long overdue birding on Highfield Moss in Lowton today this afternoon when I noticed that a section of the moss was on fire.

When I first walked on to the Moss I noticed quite a large area that had previously been burnt but it wasn't on fire. But on my way back the flames were rising quite high as you can see from these hurriedly-taken photographs. At first I thought it might have been land management but as I couldn't see anyone else about, I assumed it must have been spontaneous. 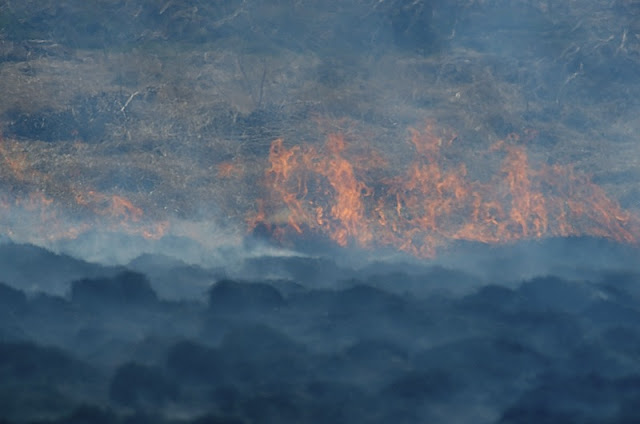 I called 999 and in spite of being put through to the Merseyside division of the Fire Brigade, the appliance arrived in about 15 minutes. It had to turn back though when it approached the railway line from Newton Road and obviously couldn't get across - I don't know where they went next, perhaps down Winwick Lane.

I also texted Ian McKerchar, a local birding expert and fireman as it happens, as I thought he might know of some lesser known path for them to get the vehicles there, as it seemed pretty inaccessible to me. 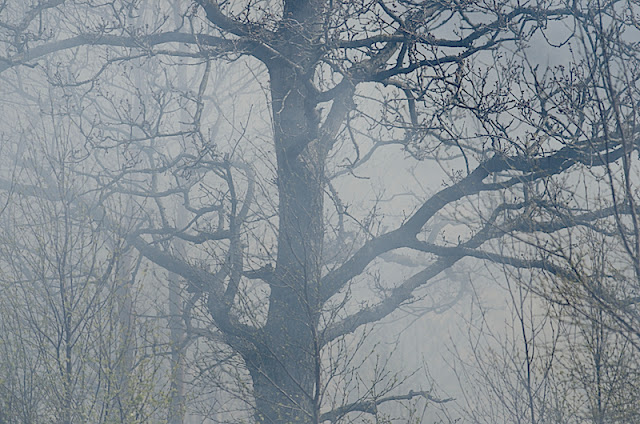 Talking to a local on my way out, he said the area had been on fire last night too, and Ian says the ground can remain smouldering under the surface without actually being on fire - perhaps the hot weather was all it needed to get going again.

Apart from that there wasn't too much about (earlier) but I did see some Willow Warblers singing away, Reed Buntings, a Linnet, a Kestrel, some Skylarks and the usual Crows, Tits and Pigeons. 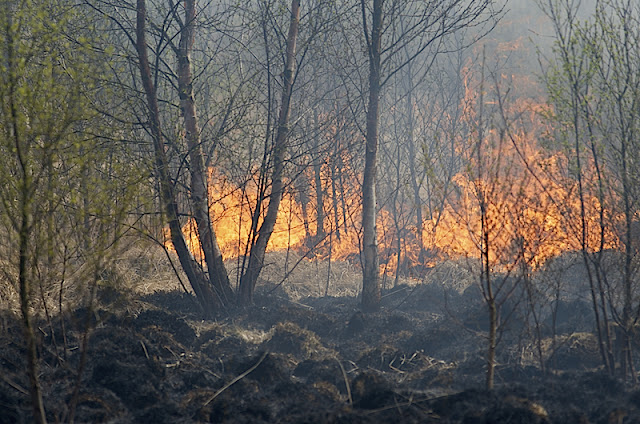 Posted by GeekTeacher at 17:10 No comments:

I went down Rindle Road this morning with just one objective - to get a decent photograph of a Whitethroat.  Here's what I came back with ... 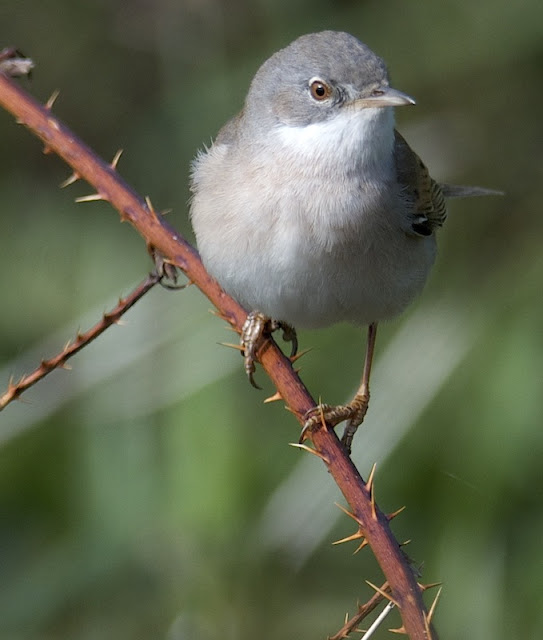 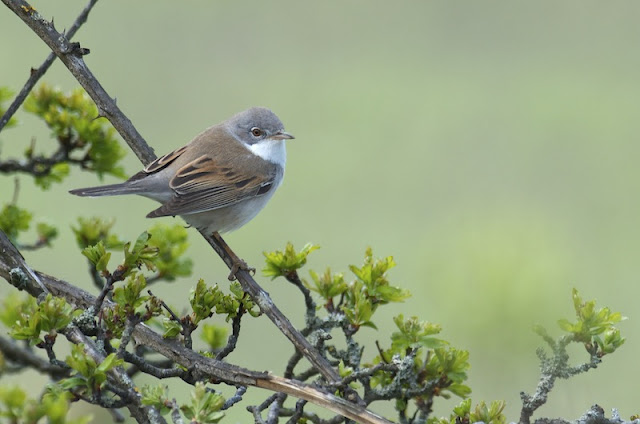 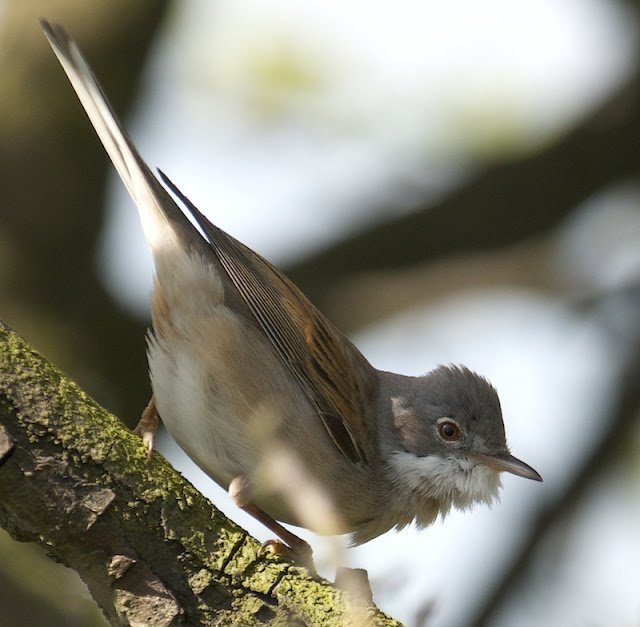 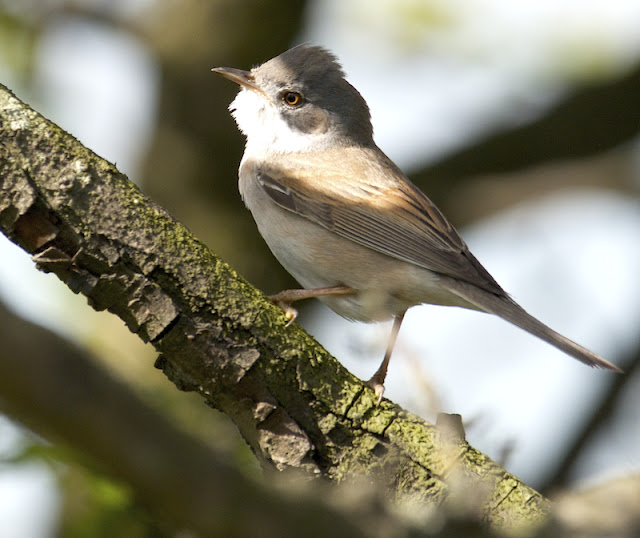