Marshside and Hesketh Out Marsh

Today I decided to visit Hesketh Out Marsh RSPB reserve in Lancashire for the first time, whilst also paying a visit to Marshside RSPB reserve in Southport on the return journey.  My mistake was to arrive at Hesketh Out Marsh at low tide, and so there were very few birds around. However, the area (which is a large salt marsh) did seem full of potential with a nice sheltered viewing area, so a future visit is a certainty. The only birds I saw here today were:

Whilst at Hesketh Out Marsh I met two birders who had just come from Marshside RSPB and who said it was packed full of birds.  So, with very little to see here, I didn't stay too long and headed off to Marshside, where I saw the following birds:

Posted by GeekTeacher at 22:15 No comments:

Sarah and I took a short two-day birding break to North Wales and Anglesey on this, the windiest weekend of the year, when we saw the following birds:


Kinmel Bay (in a sandstorm)

UPDATE: Unfortunately I have deleted the photos from this trip by accident - stupid me!

Posted by GeekTeacher at 23:19 No comments:

This was the only usable picture I managed to take this afternoon, mainly because I'd not changed my exposure compensation settings from a previous day, and so they were nearly all overexposed.  However, this one has not turned out too badly.
I started off down Moss Lane where the first bird I saw was a Kestrel (not the one above) sitting in a low tree right next to the road.  I stopped the car and had look through my binoculars before reaching for my camera - of course as soon as I wound the window down to take a shot, it flew off.
Further down Moss Lane there were 200-300 Starlings gathering for an early roost at around 2:30pm.  They lined up along the telephone wires in the fields south of the lane, and occasionally a group would descend on the field. Further groups made the numbers swell until there was no space at all between the two main supporting telephone poles.
I had a flashback to a scene from Pixar's short animation called 'For The Birds' and all it needed was a buzzard to come and sit in the middle of the line to ping all the starlings into the air!  Then suddenly all the birds took to the air and flew together in a formation resembling a puff of smoke - a wonderful sight! I saw them again later in trees on the opposite side of the lane.
There were also 20-25 Carrion Crows in a tree in the fields north of the Lane.  There was not much else down here except for a flock of 30-ish Pigeons (including one very white one), a couple of creaky male pheasants and a stream of traffic to-ing and fro-ing from Turf Nest Farm at the end of the lane.
I left Moss Lane and headed for the feeding station at Rindle Road.  On the way back I saw the Kestrel again (I assume it was thew same bird that had flown back) and had quick look through my bins, but I didn't bother trying to take a photograph.
On arriving, I parked up and went for a walk towards the level crossing where I was met by a horrible sight in the field just before the cottage - there were 14 small carcasses in various states of decay strung up along a barbed-wire fence next the the small stream.  At first I thought they were rats, but there were no long tails. Next I thought they might be bank voles but their paws and claws didn't seem right. Then it clicked, they were moles and the poor creatures had been hung by their snouts on the fence.  By the look of it they'd been there a while, with some of them seemingly scavenged by local animals.

When I got home I used the internet to find out that this is called a 'gamekeeper's gibbet' and it was done to prove that the gamekeeper was doing his job and so that he could get paid.  The only other time I'd seen this practice was in the Yorkshire Dales some 20 to 25 years ago - in this day and age it seems barbaric that it's still done by some people.  Does anyone know if this is still legal?

I returned to the feeding station to discover that some new bird feeders had been hung in the bushes along the track, but they were almost completely empty - I thought to myself that I must bring some seed for them next time I come.  There were six Collared Doves sitting in the tallest tree, a few Blue Tits and a male Chaffinch in the bushes but apart from that not much else.  I decided not to stop, but to go into Rindle Wood in search of a Treecreeper which I 've seen only once before and here as it happens.
After walking through the wood and seeing nothing but a few Woodpigeons, I emerged at the far end to the sound of a flock of Long-tailed Tits in the trees at the edge of the pools.  After spending some time trying to photograph them but with little success, I turned round and saw another Kestrel perched on top of a distant aerial.  I tracked with my camera it as it flew off over Astley Moss and disappeared, but none of the shots were any good - I hate moving birds!
After this I walked a little further along the edge of the pools and saw a Yellowhammer perched high up on top of one of the dead silver birch trees.  After taking a few shots also I noticed a Buzzard perched on a tree top on the far side of Astley Moss.  I took a few record shots, but it was too far away for anything decent.
I was just about to head back to the feeding station, when the Kestrel reappeared in the distance over the Moss.  In a series of hovers it gradually got nearer to me until I managed to take the only decent picture of the day (shown at the top of this post) when it landed on one of the dead trees. The sun was setting and the light was failing fast, but that makes the picture quite an atmospheric silhouette.
Finally I made my way back to the feeding station where I came across six Fieldfare in the tall tree, as well as a Willow Tit, several Tree Sparrows, a Great Tit and two Blue Tits.  Nothing new today, but a nice little list for an hour and a half in the area.
Posted by GeekTeacher at 18:33 No comments:

Now if that title doesn't get me a few more hits from Google, nothing will!  The reason for the titillating title is that today we had more tits in our garden than at any one time ever before.  This was mainly due to a flock of 20-25 Long-tailed Tits passing through our single Hawthorne tree and feeders.  As ever the flock only stayed for a minute or so, but they left a couple of Blue Tits, Great Tits and a single Coal Tit behind as they left.

No time for any pictures, but a great sight on a sunny November afternoon.  Turned out nice again, hasn't it?
Posted by GeekTeacher at 17:52 No comments:

After checking the weather for the last couple of days, I finally got round to going to Leighton Moss RSPB reserve in Lancashire for the first time today.  I'd been meaning to go ever since I got my RSPB membership in February, but even though it's only around 60 miles away, I'd never managed it until now.

In this quick posting I'm just going to list ALL the birds I saw today, and when I've sorted through the hundreds of photos I took, I'll add some of the better ones.  Here's the complete list, pretty much in the order in which I saw them: 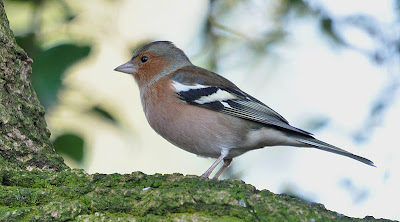 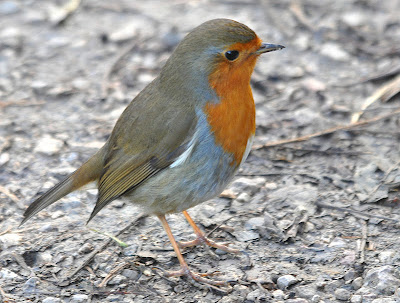 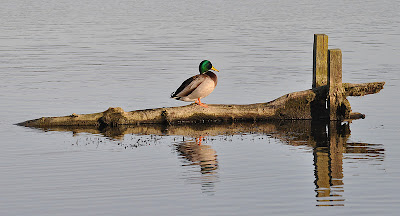 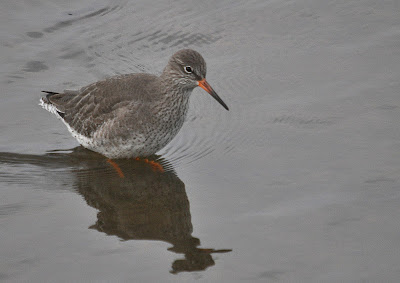 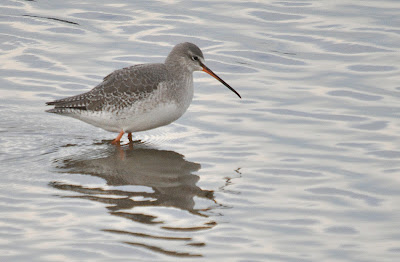 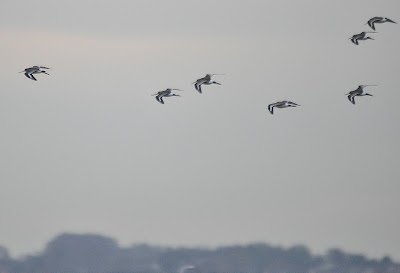 Unfortunately the Bearded Tits didn't show while I was there today.  But out of 33 species seen, I did add four new birds to my year and life list, so that's not bad for my first visit here.

On the way home I dropped in at Hest Bank and in the rapidly descending twilight at only 4:15pm I saw a Grey Heron, Curlew, Lapwing, Gulls and possibly some Redshank on the beach.  A great day out and I'll be back soon!
Posted by GeekTeacher at 19:28 No comments:

Greenfinch in Our Garden

When Sarah and I woke up and looked out of the bedroom window this morning there was a sorry looking ball of greenish fluff sitting on our window ledge. On closer inspection it seemed to be a young Greenfinch and it didn't look too good.

We could press our noses right up to the glass and it didn't fly away, so we supposed it must be injured.  The sun was shining very brightly and it was probably warming itself on the ledge, but it's eyelids were often closed and Sarah even thought it might be blind in one eye.  I went downstairs to get my camera and naturally when I returned it had gone, in spite of having been there for the last 10 minutes.

We thought that would be the last time we'd see the bird and either it would fly away to pastures new or a cat would get it if it couldn't fly properly.  However, it reappeared on one of our garden feeders a little later in the day and so I managed to get some photos then.  It looked much better now and could at least fly short distances between our feeders in different places in the garden.

After a short while it disappeared altogether and we haven't seen it since - I just hope our two cats didn't get it.
Posted by GeekTeacher at 09:46 No comments:

The highlight of my short trip to Moses Gate today was a beautiful Grey Wagtail. 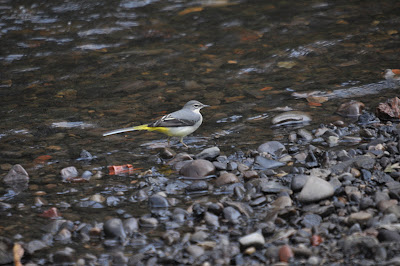 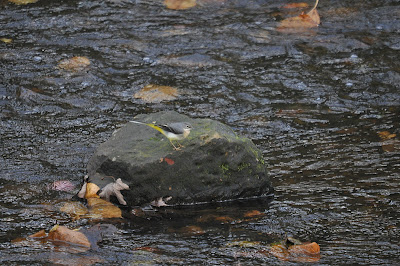 Posted by GeekTeacher at 22:58 No comments:

I've only been out a few times times to Rinde Road and Pennington Flash since my last post, with nothing much to report except the following sightings at Penny:

The Lapwing have also returned to the spit in great numbers, although on one visit there was almost nothing on the spit - the most empty I've ever seen it.

Posted by GeekTeacher at 10:06 No comments: