I've been experimenting with putting some of my Blue Tit videos on YouTube. These can be enlarged to full screen by clicking on the control in the bottom right of the control bar.

Posted by GeekTeacher at 14:54 No comments:


That's it - they're gone!  When I got up later than usual at 7am this morning the nest box was empty and there were no signs of Wills, Kate or any of the chicks in my back garden.  They must have left early this morning, because all three were sleeping in the nest when I went to bed at 12pm last night.

I was very happy that three chicks had fledged but quite sad to have missed it both live and on camera - I don't have any video recordings of them actually leaving.  Anything you see from now on will be recorded highlights of the last few days in the nest box and soon I'll be removing that.

Although I would like to see them again, I do hope they don't hang around for long in my back garden because the score is currently 3-0 to our cats - trying to keep them away from birds is nigh on impossible.

Good Luck chicks, I hope to see you again in my nest box next year.

After spending a long time looking, I did get a glimpse of Wills and Kate and two of their chicks in a Willow tree in my next-door neighbour's garden.  They were quite hard to spot due to the tree's hanging branches which are now fully leaved, but the parents taking in food gave them away.  At times the fledglings seemed to practice short flights between a Hawthorne in my garden and the Willow tree.  Wills and Kate also returned briefly to the fat balls on my feeding station. but shortly after were gone and I haven't seen them since.
Posted by GeekTeacher at 07:31 No comments: 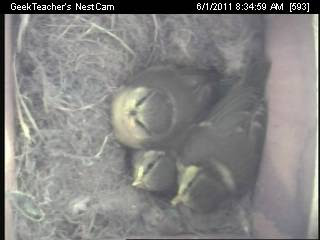 Well things are really hotting up now.  The three chicks are very active and food is in constant supply by Wills and Kate.  Kate has been encouraging the chicks towards the nest box hole by holding food in her beak and not letting go of it and they've been looking out of the hole a few times today. 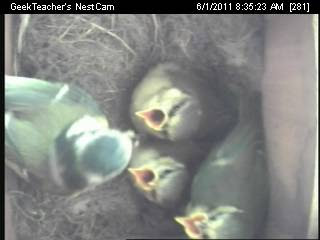 The chicks have been doing a lot of preening, wing stretching and fluttering and so I reckon that they are ready to go.  It could be today although it's a bit late now, but it will probably be early tomorrow, so watch this space. 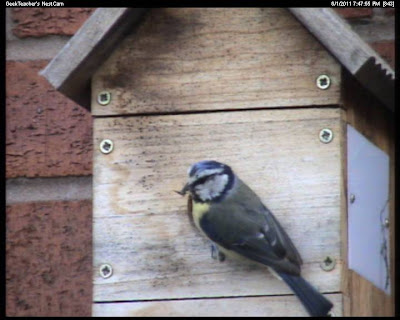 Posted by GeekTeacher at 19:40 No comments: