Today was the first time for a while that I've spent any length of time down here, and it was what Winnie the Pooh would call 'a rather blustery day'. Here's what I saw:

Moss Lane
A few more Wood Pigeons
Around 40-50 Corvids
40-ish Goldfinches on wires
4 Juvenile Partridges (could have been juvenile Pheasants as I only got a brief glimpse)
1 Buzzard
30-ish Pink-footed Geese flying west - I heard the coming from way off.
Another group of six flying South, but may have been Canada Geese
10-12 Starlings on the wires

Rindle Road and neighbouring fields
2 Song Thrushes on wires
1 Chiffchaff
A few Swallows, but a lot less than earlier in the week.
Even more Wood Pigeons
Buzzard being mobbed by a Crow
2 Kestrels - probably same one twice
Great Spotted Woodpecker on telephone pole

Did I mention the Pigeons? - Seems like they had a good year.

P.S. Beware of the footpaths around Astley Moss SSSI at the moment as they're underwater in many places. I turned back from my normal anti-clockwise route through Rindle Wood and around the edge of the Moss because I sank into a deep puddle on the path and I was carrying my camera gear. And when I went the other direction along Rindle Hedge, I nearly lost a wellie when I sank in again up to my shin - the water came over the top of my boot and I had to put my gear down to get out without the peat sucking my boot off.
Posted by GeekTeacher at 13:47 No comments:

'Birds and their Habitats' Class

Today I enrolled in Peter Baron's 'Birds and their Habitats' class at Whitefield Library.  Peter has been the bird recorder at Elton Reservoir for over 20 years and has run popular birding classes at Whitefield, Prestwich and Ramsbottom Libraries for many years too.

After discussing it with Peter, I volunteered to set up a website for the class to record what we discuss in class and what we see on fieldtrips.  The address is: birds-ath.blogspot.com and each week's class discussion and notes will be presented here.  This will be useful for those who can't attend the class every week as well as being a place to display our bird photos online.

If you want details of when and where the class runs, how much it costs and what sort of things we do, why not head over to the 'Birds and their Habitats' website?
Posted by GeekTeacher at 22:03 No comments:

I had a great day out at Marshside today on one of the RSPB's Big Tide Walks. Here's a rundown of what I saw: 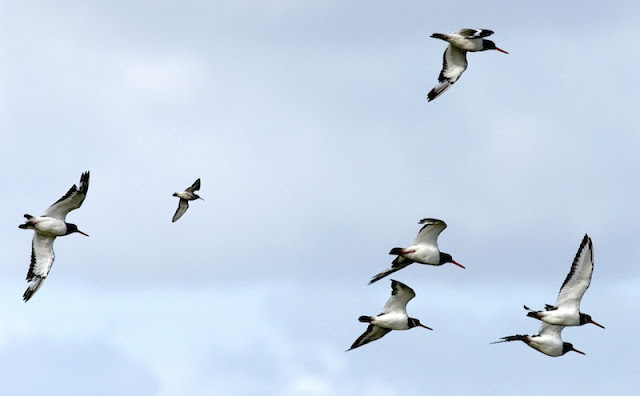 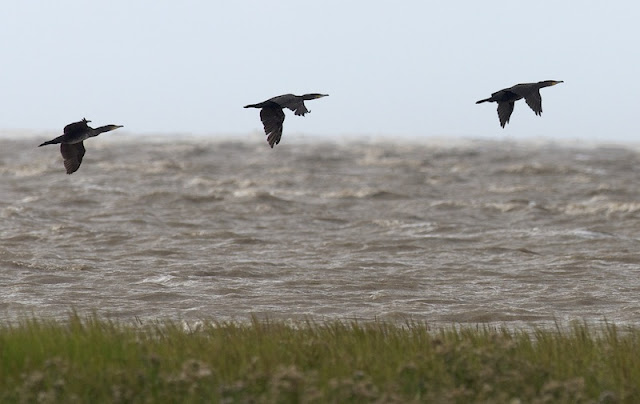 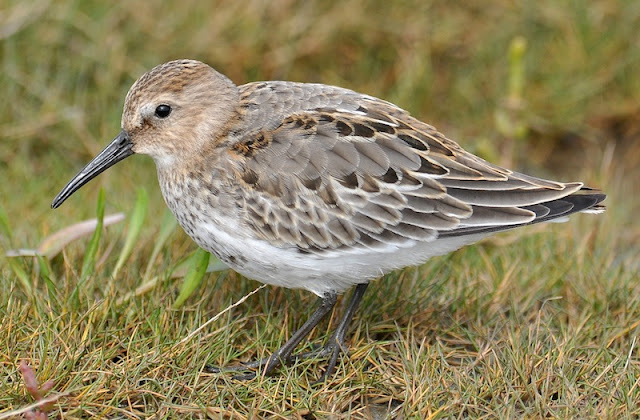 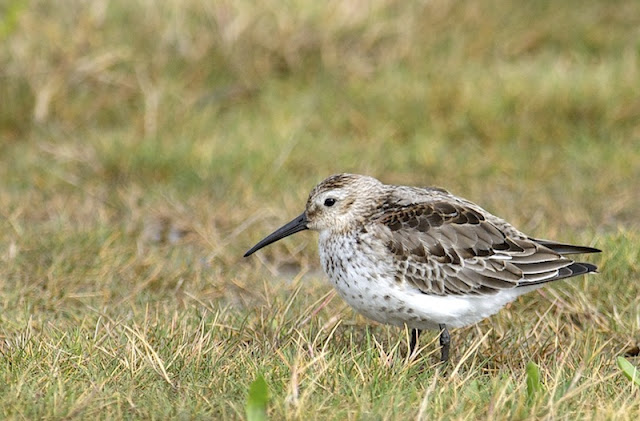 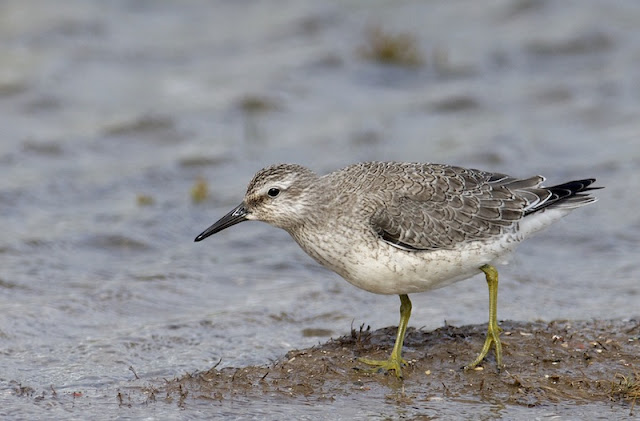 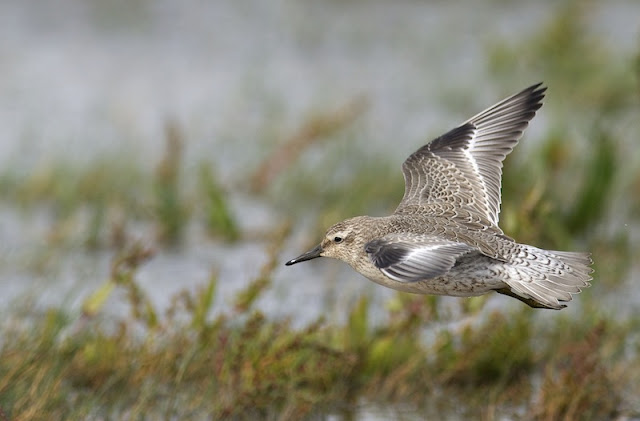 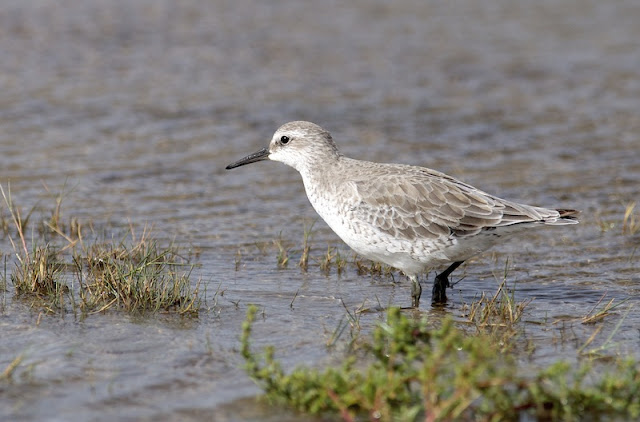 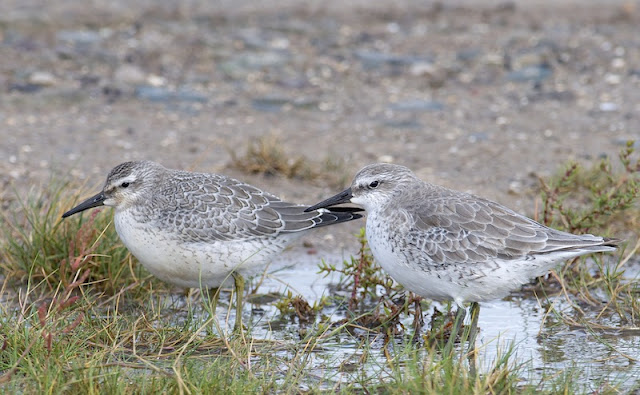 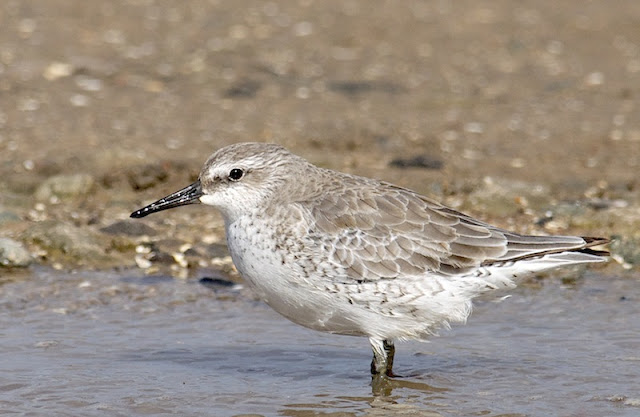 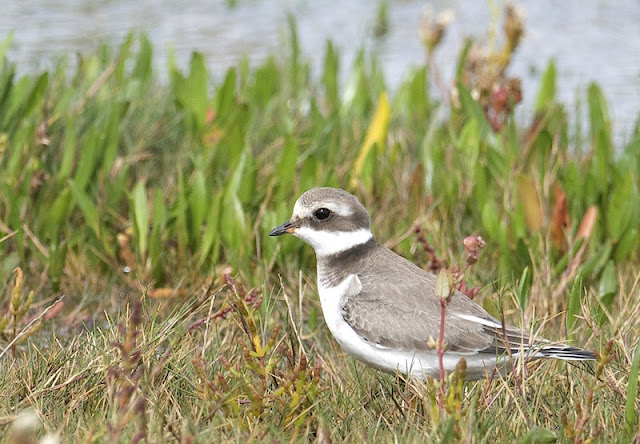 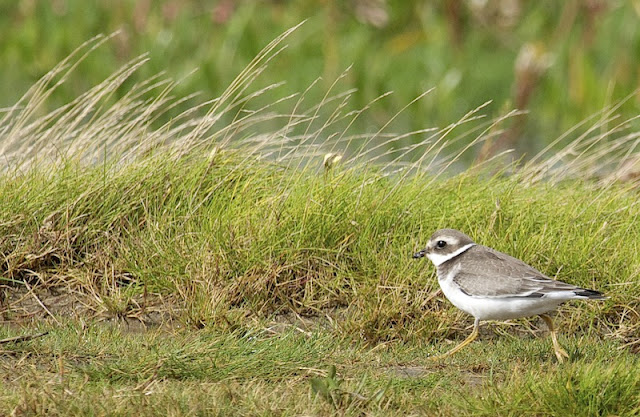 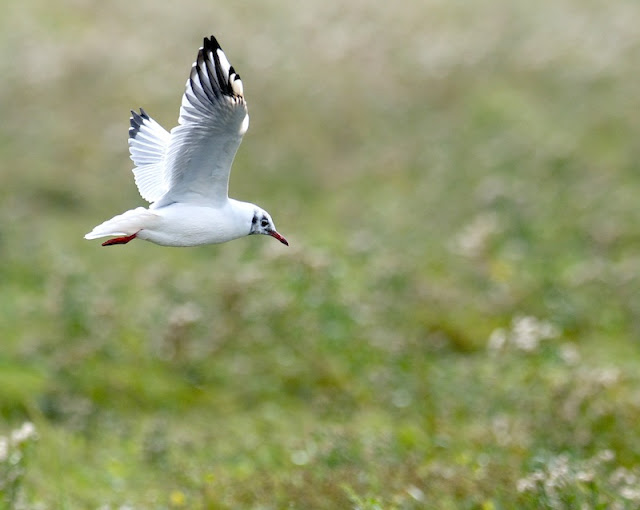 A sight that I've never seen before was that of a large mixed group of Starlings and Swallows (50-ish birds in total) flying low above the marsh vegetation, presumably to flush insects? When the Swallows had flown about 10 metres they'd veer up into the air and fly back to the start of the party and begin again. The whole flock thus slowly rolled forward down the marsh - stunning teamwork which I'd be interested to hear more about if anyone knows of this behaviour. 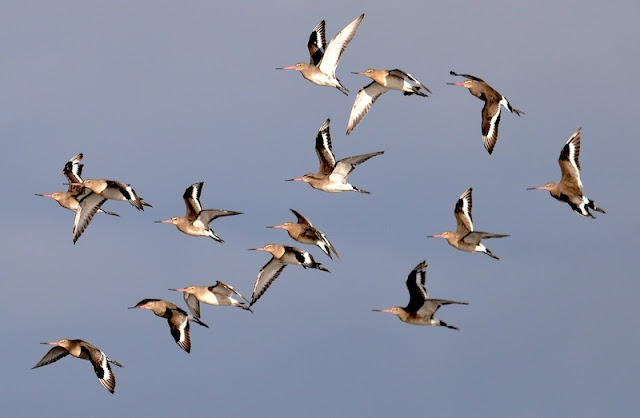 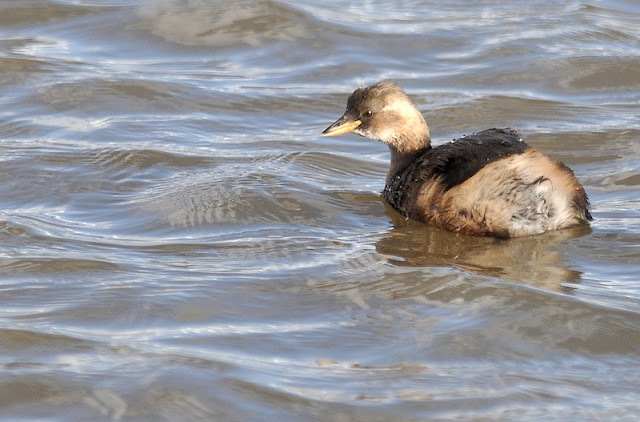 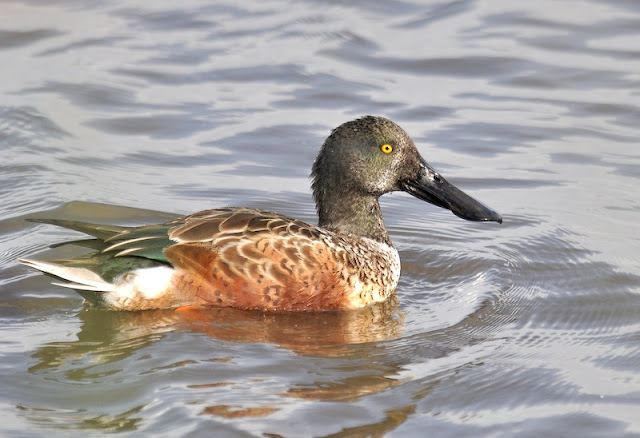 I can thoroughly recommend the Marshside area (if not always Soundgrounders Hide) for a day out that has never disappointed me.
Posted by GeekTeacher at 22:58 No comments:

With the prospect of some nice sunshine and good photographs, I set off for Pennington Flash today in search of a photograph of a bird that I've not got very close to before - the Knot.  A single bird had been reported on the Manchester Birding Forum for a couple of days and it seemed to be sticking around.  There had also been a couple of special birds that had caused a bit of a birding commotion here last weekend - a Black Tern and an American Black Tern, but there was next to no chance of them being here today.


When I got to Horrocks Hide, the vegetation on the spit had been cut down and visibility was much better than last time I came.  It was good to see the Lapwings and Cormorants back in some numbers as well as the usual Black-headed Gulls. I met Barry Hulme and Bill Harrison in the hide and they told me the Knot was showing at Ramsdale's Hide round the corner - so after a quick look around during which time I managed to spot a Pochard and a Great Crested Grebe, I set off in search of my goal.


I found the Knot almost immediately, and then spent most of the time wishing it would come closer. The mid-morning light at Ramsdale's Hide is not great for photographs, and so I wasn't really happy with any of the distant photos I took today - ah well, I'll just have to come back when the birds are closer.


I couldn't see the Green Sandpiper here today either but there were a couple of Little Grebes diving in front of the hide as well as some Teal, Mallards, Coots, a Gadwall pair and some Shovelers.


I left Ramsdale's and walked round to the viewing area overlooking the far end of the spit. There is usually a Kestrel around these parts and today was no different, although it didn't hang around for long.  I noticed that a chunky new structure had been built high up on the canal bank overlooking the Flash, and wondered if it was for viewing the area - I'll have to investigate this on my next visit, I thought to myself.


With nothing much showing here, I set off back through the woodland walk to Teal Hide, and chatted to a couple of birders on the way.  At Teal there was a group of seven or eight Shovelers, the males being in eclipse and looking quite similar to the females.  But the water level was very high and there was no chance of any waders, just the 'usual suspects' of Coots, Moorhens, Mallards and a pair of Gadwall.  A single Mute Swan was also present. Barry and Bill caught up with me here, and told me that a pair of Greenshank has landed near the spit and were giving Jon Taverner some very good views in front of Horrock's Hide - I just had to return, and quickly.

On the way back to Horrocks, I called in briefly at Lapwing Hide, where the vegetation is so high you can't even see the water and Pengy's Hide where there just a couple of Mallards and Coots.  No point in staying here I thought, and made off in search of the Greenshank.


When I got to Horrocks, Jon Taverner was firing away with his big 500mm prime lens and 1.7x teleconverter.  The birds were in his ideal position, well-lit and only 5 metres or so away.  I struggled to get my camera gear out and setup quickly enough, whilst all the time the birds were moving away.  I quickly fired off a few shots just to get 'something' in case they disappeared.  Then I settled down a bit and waited for them to get into a good position.


The Greenshank did a tour of the whole spit and were chased by Lapwing on several occasions. But unfortunately, whilst I was there, they didn't come close to the hide again. However. I did get my best ever shots of a Greenshank here today. There were also four or five Common Snipe lurking in the vegetation and occasionally coming out in to the open, but they were too far away and too well-camouflaged for photos.


After chatting to Jon (who was fairly well-satisfied with his own Greenshank shots) and a couple of other birders, I decided to go back to Tom Edmonson's Hide which I'd skipped on the way to Ramsdale's when looking for the Knot.  I was hoping to see a Kingfisher, as they have been reported here quite frequently.  When I got to the hide, a Grey Heron was perched on a post in front of the viewing area.


I love Herons, and so I spent most of my time taking photos of it and another juvenile which appeared later and which went fishing.  I did briefly get a glimpse of a Kingfisher,  an iridescent blue flash across the water, but that was all.


On the way back to the car I called in briefly at Horrocks again, just to see if the Greenshank had come close again - they had, but had then disappeared to the far end of the spit.  And so I went home quite satisfied with my birding activities and with two new birds to add to my year and life list.
Posted by GeekTeacher at 18:39 No comments:

I had a great day out with Keith Mills who showed me around the Rumworth area on the outskirts of Bolton. Here's a summary of what we saw today:

Oh yes, and really unusual decoy machine in a farm field near Beaumont Road with two 'woodpigeons' rapidly spinning around on it.  For a moment we both thought that they were real 'dead' birds on them as their wings flapped whilst it spun round.

Nothing really special, but very enjoyable company - cheers Keith.
Posted by GeekTeacher at 17:11 No comments: