I spent a lovely sunny afternoon at High Rid Reservoir near Doffcocker in Bolton today, with the target bird being a juvenile White-winged Black Tern. This was a lifer for me having missed a  chance of seeing one at Elton Reservoir in the last few years. 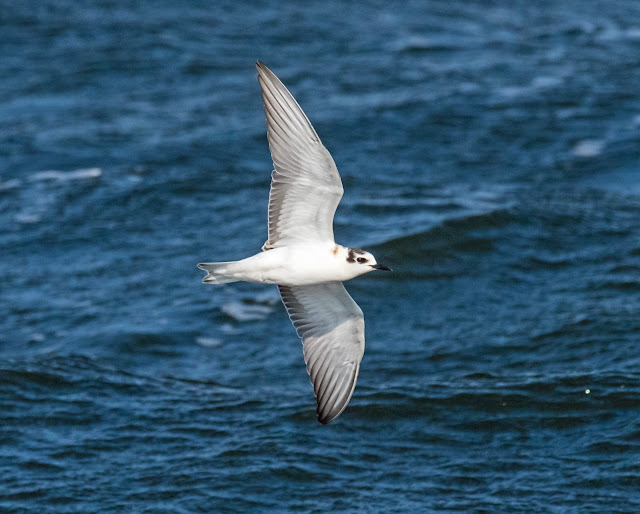 This was my first day out photographing birds since I had my nose operation nearly three weeks ago, and so I was little unsure about how holding the camera up to my face would go, but as it turns out it wasn't a problem.

UPDATE: The photo below has just been given a 'Notable' award on BirdGuides. 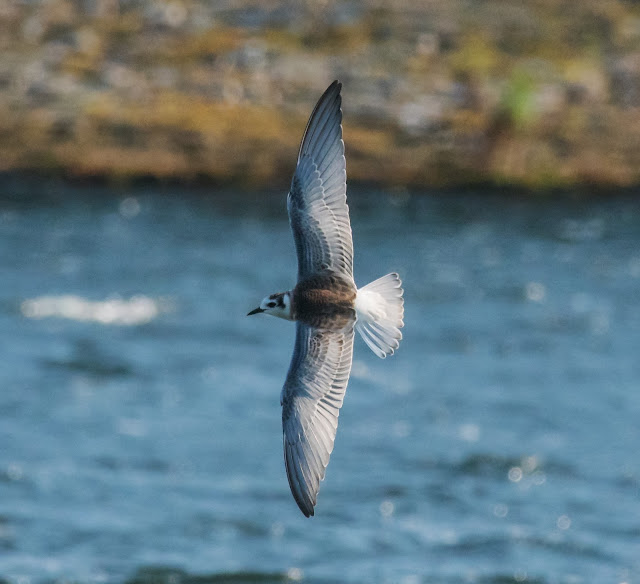 I met some great people today and we had a good chat as we watched this special bird repeatedly resting on an orange buoy at one end of the reservoir and then flying down to the end where we were standing before turning into the wind to feed by skimming flies off the water. 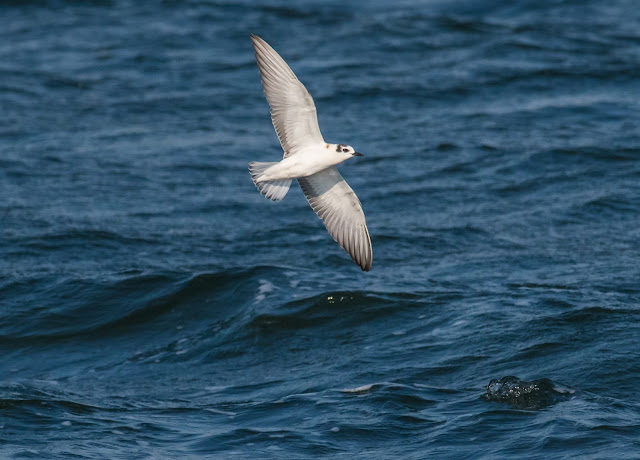 A bit more text to follow tomorrow, but for now, here's some more of my photos: 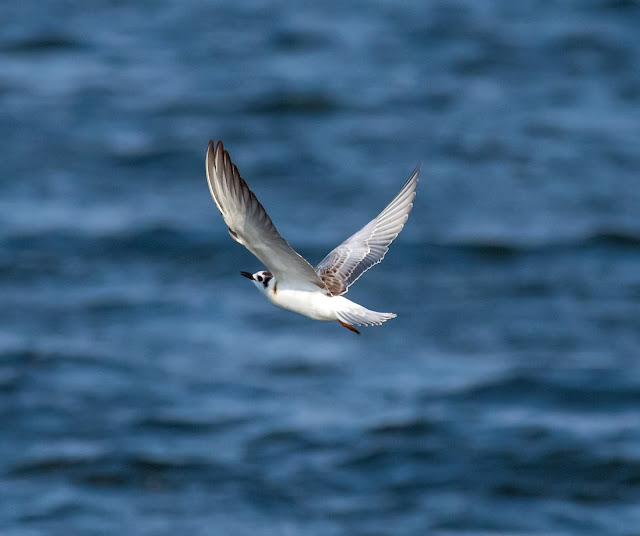 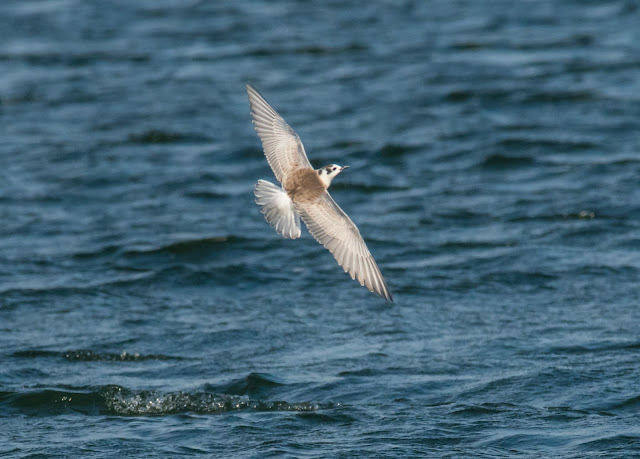 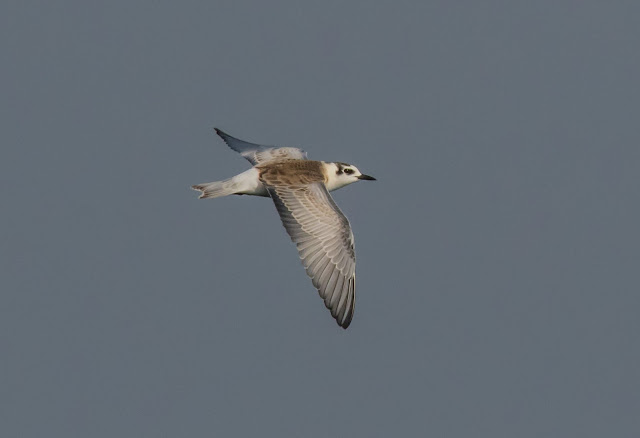 Second Attempt at Using the Campervan

It's been two weeks since my nose job operation and as I've not been anywhere, let alone take any photographs, I've been itching to get out for days now. This also coincided with the fact that I've finally got my campervan working well enough to use and so this week, despite having no confidence in it at all and fully expecting to break down yet again,  Sarah and I decided to give it a try. Well, I had paid for membership of the RAC to give me a little more piece of mind if we were to break down. 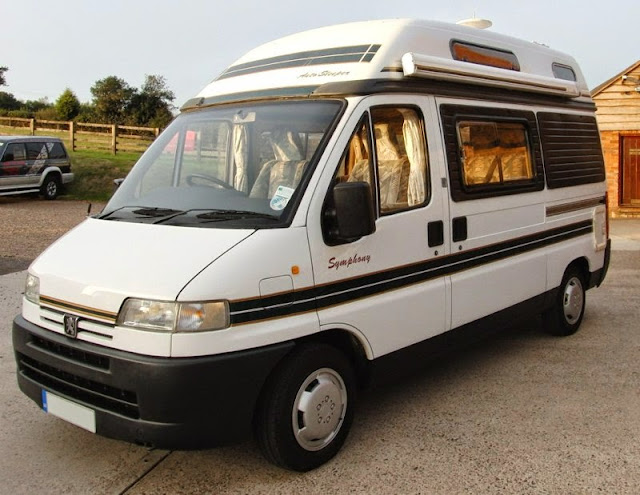 We started with two day trips out, as well as needing to use the van for a couple of hospital checkup appointments. The first day out was to Marshside RSPB at Southport - no camera, only binoculars and so no photographs I'm afraid, but we did have good close views of a Snipe and several Black-tailed Godwits, as well as more distant views of the long-staying Cattle Egret and quite a few Little Egrets.  Apart from these there wasn't really much else about of note, but we has a nice picnic lunch on the car park in the campervan.

Our second trip was to the Wirral, starting at Burton Mere Wetlands RSPB and then driving up to Hoylake for lunch, before finally walking across to Hilbre Island over low tide.  This time I did take my camera and some of the landscape shots I took are included in this post.

At Burton Mere Wetlands we had good view of the long-staying Spoonbills, but I could only count eleven when twelve are said to be present. We also had distant views of a Little Stint and closer views of a Green Sandpiper as well as the many usuals which are present in front of the Visitors' Centre. As Hilbre Island was our main target for the day, we only stopped by at the Visitors' Centre area and were soon on our way.

After a quick lunch at King's Gap, Meols in Hoylake where we watching a massive Gull and Oystercatcher roost, we set off for West Kirby where we parked by the side of the Marine Lake after popping into Morrison's to use the toilets. 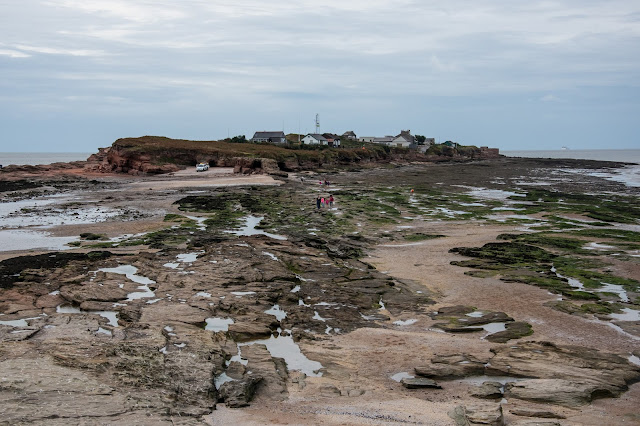 The walk across to Hilbre Island via the islands of Little Mouse and Middle Mouse takes around an hour, and we had distant views of a large group of Atlantic Seals basking on the sand banks on the way. There really wasn't much bird life around today apart from Gulls of various denominations, but the geology and scenery of the area were fabulous. 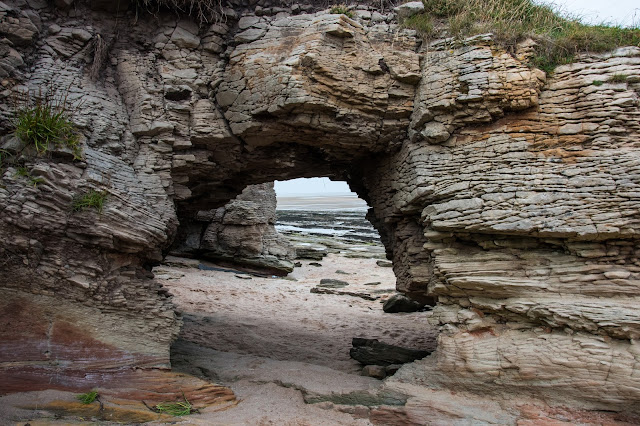 As a former geology teacher who has been to Hilbre several times before, I was surprised not to have noticed a classic fault line running through the bedding layers in the red sandstone rocks before. This area would have been great for one of my class's geology field trips with good examples of bedding planes, folds and faults as well as classic coastal erosion geomorphology. 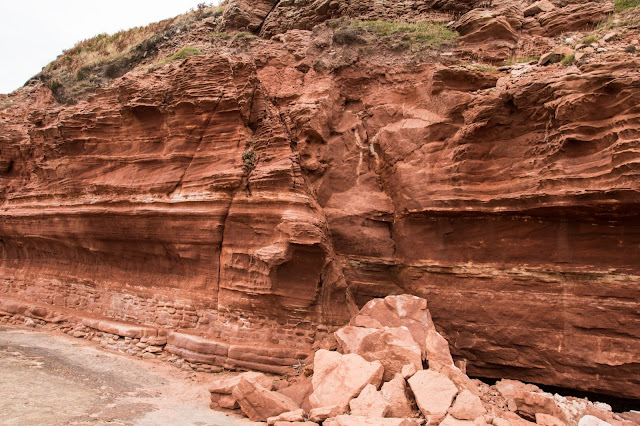 The final trip of the week was an overnight stay in Anglesey, the main reason (apart from being my bird-mobile) for buying the campervan in the first place. It was on this very journey back in November 2014 when I bought the van that all our troubles started. We broke down on our first trip away and had to be recovered home. Following this there were two years of constant problems resulting the fact that we had only ever 'overnighted' in the van once, and that was on that first trip when we broke down. 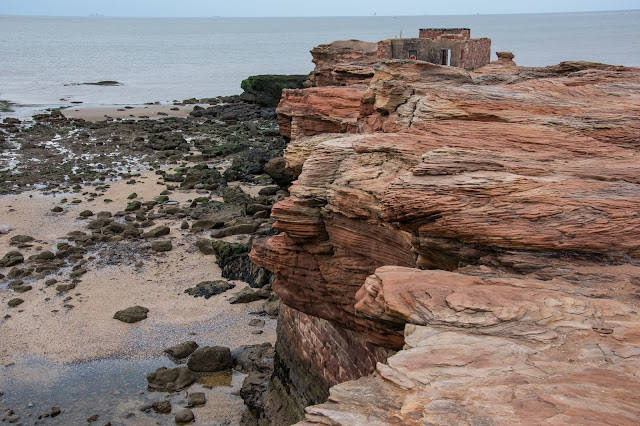 Since then the van has been constantly in and out of three garages with one repair after another, a saga I'd much rather forget now. So deciding to go for an overnight stay somewhere was quite a big deal given the van's previous history and I decided to go 'light' with as little gear as possible. This meant no cameras, only binoculars and a scope. 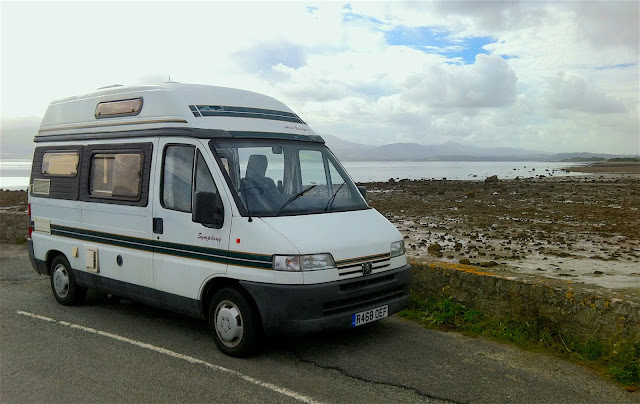 Sarah drove the van from our home in Tyldesley to Llandudno where we had a fish supper on the Deganwy side of the Great Orme, overlooking the sandy beach. There were no problems on the way and the van seemed to find a natural speed of 60mph. I then drove it to Anglesey where we parked up in a lay-by which overlooked the sea on the single track road to Penmon.  It was dark by the time we arrived, so all there was to do was have a cup of tea and go to bed. It didn't half rain that night and there were lots of gurgling noises as the water found its way down the windows and into gullies and channels designed to shed the water. But we stayed dry and there were no leaks. It was also very windy and the van was buffeted quite a lot as this was a bit of an exposed location. I did wonder if we might get blown into the sea as I fell asleep. 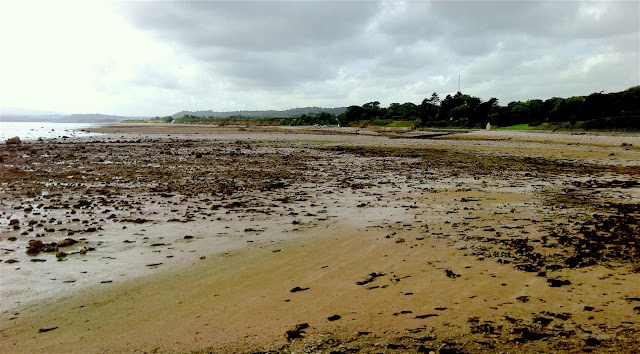 In the morning we awoke to see a beautiful scene, with a rocky beach in the foreground and some of the North Wales mountains in the background. But better still, there was bird life here including three or four squabbling and noisy Grey Herons, at least ten whistling Curlew, many Oystercatchers and Gulls, three or four Rock Pipits, two or three Redshank, at least two Cormorants and best of all, a Sandwich Tern preening itself on a rock.  After breakfast we had a short walk across the beach to a picnic area where we met a lovely lady with her dog and had a chat. On this walk which was bordered by gardens with some tall conifers and other trees we saw a Great Spotted Woodpecker, a charm of about fifty Goldfinches and a lone Wheatear. I think I also heard a Stonechat and a Robin, but I didn't see them. 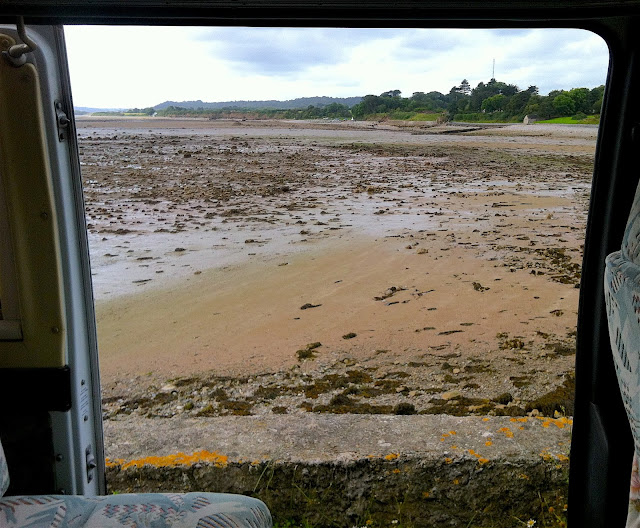 The main target for today was to walk to Llanddwyn Island near Newborough, and so we were soon on the road a heading for the main car park at Newborough Warren. However, as we approached Newborough we thought we'd take a look at another small parking area which we'd visited with our two children many years ago when we had a caravan at Plas Coch (before it got to be a country club for the rich and famous). The car park was packed, but luckily there was just enough room to park the campervan there and there was even a bird hide overlooking a small lake here - I never knew that! On the lake there were many Coot and a few Moorhens, but the stars here were the male and female Gadwall which looked stunning. After a while three Little Grebes appeared and later, a couple of Mute Swans.

After some discussion, Sarah and I decided that we could walk to Newborough beach and on to Llanddwyn Island from here - it would be twice as long but it was a free car park and a sunny day, so we went for it.  It turned out to be a bit of a trek for me however as I'd recently hurt my leg in a fall whilst gardening. It wasn't a problem at first, but I really felt it on the way back. 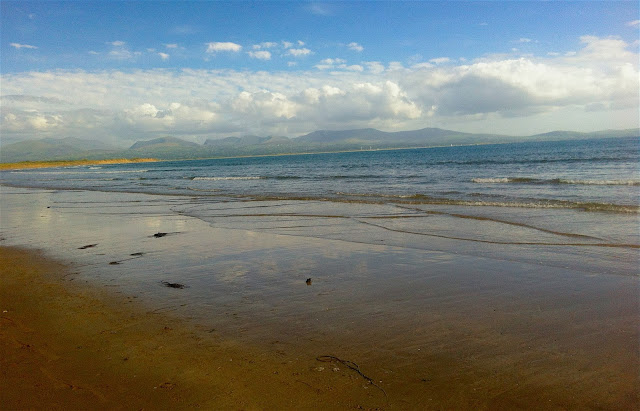 With its broad sweeping stretch of golden sands backed by shifting sand dunes and a Forestry Commission conifer plantation, the beach at Newborough has to be one of the finest beaches in the UK. We'd been canoeing here a couple of times when the children were younger and I was longing for those days again. I really wanted to go in the sea, but my gammy leg and lack of suitable attire prevented me, so I just had to think about returning soon - as soon as possible. 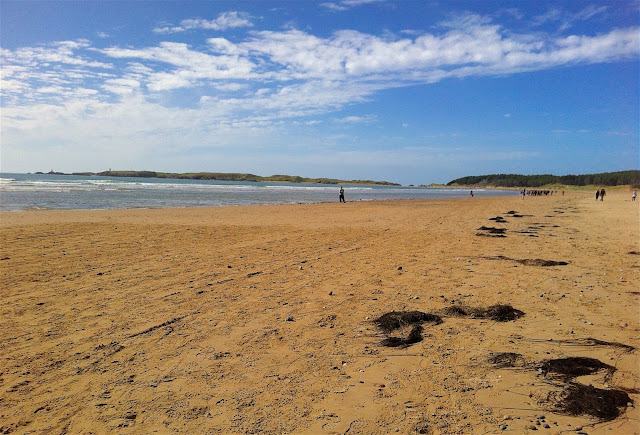 On our walk along the beach we stopped at the classic 'pillow lava' structures at the northern end, just before you cross over to Llanddwyn Island. The geology teacher in me was revived for a second time this week as I marvelled at the shapes and considered their age in millions of years. There are five main places to visit on the Island: the ruined church, the celtic cross, the cottages with a cannon outside, the two lighthouses and the stone cross - we touched all of them bar one of the lighthouses. 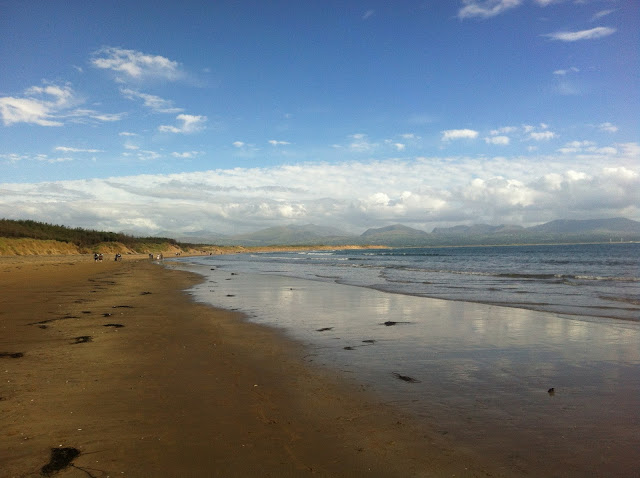 Whilst on the Island I saw a male Stonechat and Sarah saw another which was probably the female. There were many Cormorants perched on the rocky outcrops just off the edge of the Island and a few Gulls here and there. What a fabulous place this is with it's sandy coves and rock formations. The view back over Snowdonia is stunning and the sea is a beautiful green blue.

As I previously mentioned, the 3.5 mile walk back to the campervan was a bit of a trek for me and I soon started flagging. This was helped by an ice-cream and drink of pop when we reached the main Newborough car park, but we still had over a mile to go to get back to the van. However the journey was made easier with the sight of several large Ravens cronking on their return to roost in the conifers.

We walked just over seven miles in total on a lovely sunny day whilst thinking that we really mustn't leave it so long before we return once again. The only photos I've got were taken on Sarah's iPhone - they'll have to do for now, but I'll be back with my proper camera gear before long - can't wait!
Posted by GeekTeacher at 14:55 No comments: