After reading about it on the Manchester Birding website and forum, I decided to go and have a look down Rindle Road in the Astley Moss area. I was already quite familiar with the area, having lived less than 10 minutes away for the last 26 years, but not from a birding point of view.

I was very pleasantly surprised when I had barely turned the corner at the bottom of Rindle Road and saw two Whimbrel in the first field past the farms. And as I was watching them though my binoculars I heard a cuckoo calling from the field behind me. Things were already looking good.
It was here that I first met Dave Thacker, who confirmed that the birds were Whimbrel as I'd thought although there also seemed to be a Curlew calling somewhere in the distance too. Dave gave me lost of good advice and information about birding in this area - he's been coming here since he was a kid and seems to think of it as his backyard or garden. He also mentioned the Manchester Birding forum which I had already started using a couple of months ago.
That evening I went on to see some Mistle Thrush, Lapwing and a Heron in the fields on either side of the road. What a good start to my burgeoning relationship with this area!
Posted by GeekTeacher at 15:51 No comments:

I went out in the early morning sunshine to Pennington Flash today as I'd been told it was best at this time of day when few people are about and the light is good. I got there before the car parking meter had been unlocked from its vandal proof cover and so was left in a bit of a quandary as they are very keen here and I wouldn't be back for a few hours. I decided to leave my £1 coin in view on the dashboard so any meter wardens could see that I had tried to pay.

Loaded with a recently acquired 50-500mm Sigma 'Bigma' lens for my Nikon D90, I set off for Horrocks Hide first today when normally I start with Teal Hide, the furthest from the car park. 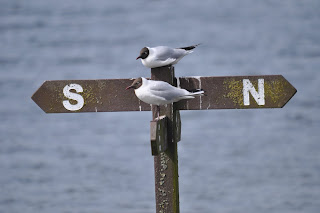 I was quite surprised but actually pleased that there was no-one else in Horrocks Hide, as this would let me set up my new equipment without looking like a total novice to experienced birders. After I'd clamped the scope to the hide shelf, I soon spotted the following species of seabirds, waders and waterfowl: 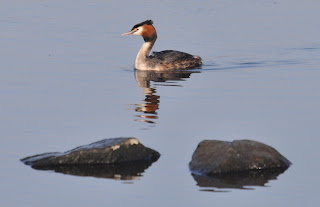 I took loads of pictures of a solitary Great Crested Grebe which was circling around a pair of stones in the water very close to the hide. I recognised these stones from the pictures of other birders - the Grebes use them in their famous mating rituals, well the last part anyway. This was as close as I've ever got to these birds and because the light was just right for taking photos, I spent a long time on this subject. I'm still not sure my secondhand Bigma lens is as sharp as it should be, so I tried every setting I could think of to see if I got just one really sharp one - I'll let you know when I've finished processing the few hundred snaps I took! 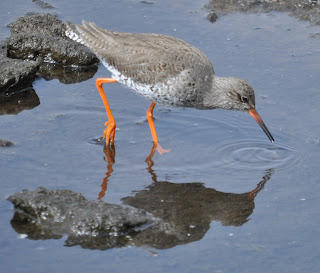 After ten minutes or so I was joined by a few more experienced birders who pointed out some Common Terns on a buoy in the middle of the Flash - I'd never have spotted these on my own. I was also told that there was a newish hide (Ramsdales) that I'd not been to before and someone else also mentioned that they'd seen a Ruddy Duck at Pengy's Hide, so I thought I'd do both of these later. 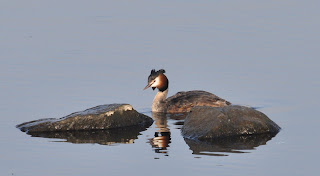 It was here that I was introduced to John Taverner and his beast of a lens - he has a Nikkor 500mm prime which fills an entire rucksack on its own! I now understand what John Tymon meant when he said I'd recognise him as being the one 'on his knees'! John showed me some pictures of Wheatear he'd taken here last night using this lens with a Nikon 300s and 1.7x teleconverter. Ah, I can only dream of equipment like that at present. 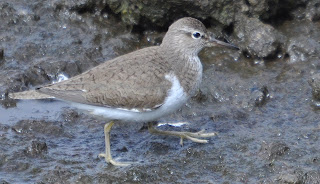 From Horrocks Hide I set off for Pengy's Hide in search of the Ruddy Duck and perhaps a Kingfisher sitting on the post put there by John Tymon. There was not much about when I got there and so I moved on to Bunting Hide which was shut - oh yes, it was still quite early in the morning. So then I moved off to Lapwing Hide where there was absolutely nothing about and so onto Teal Hide, where again there was very little apart from a pair of Shoveler some Little Ringed Plover and the other more usual suspects. 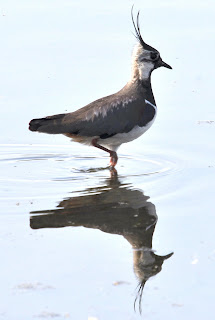 So, after I good start, things were going downhill in terms of numbers of species to see. After a quick chat with one of the wardens at Teal Hide, I went back to Lapwing Hide (still nothing) and met her again in Bunting Hide where she was putting out the wild bird food.

After another chat I returned to Pengy's Hide to look for the Ruddy Duck - this time I was in luck. There were some Great Crested Grebes in the distant reeds as well as some Mute Swans and Canada Geese. A few Moorhen and Coot were also around and then I spotted some thing I didn't recognise - after a quick look on my RSPB identification program on my PDA phone I decided it was a female Ruddy Duck, but it was too far off for getting decent photos, even with a 500mm lens. 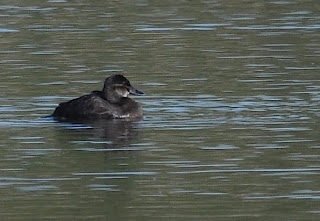 My expectations of what would be possible with this sort of lens are slowly diminishing - it seems that there's no substitute for getting physically close to the subject and I'm just going to have to find some good places to do this. I sat in the hide taking pictures just for my identification record, knowing they wouldn't be that great to look at. 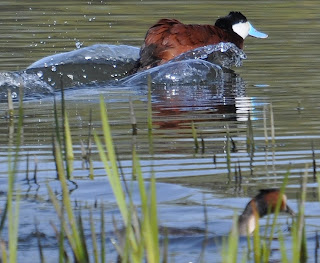 After a short while another duck appeared in the reeds a little closer to the hide. I could see it's distinctive blue beak and so I knew this was the male Ruddy Duck. It was soon joined by the female and a Grebe that was following it. I managed to get a few photos of the pair being harassed by the Grebe before they both shot off across the water back into the distant reeds. Well at least I saw it. By the way, While I was waiting for the Ruddy Duck to appear think I might seen a new species sitting on a bulrush - I managed to get a picture of it (below) and if it actually is new, I'd like to name it Fluffy Duck. 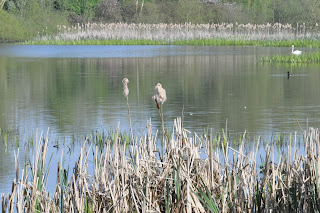 From Pengy's Hide went round the corner to Edmonson Hide, where there were a number of Tufted Duck pairs as well as few Coot and Moorhen. Here I met someone who said he'd seen (or heard) Sedge Warbler but not much else. When I mentioned that I'd just seen a Ruddy Duck he said something about them being shot, which I didn't quite understand at the time. I later found out more about the Ruddy Duck problem and the culling issue when I mentioned it to John Tymon, who had been so annoyed about it that he said he'd left the RSPB and who still feels strongly that a mistake has been made. Read more about it here. 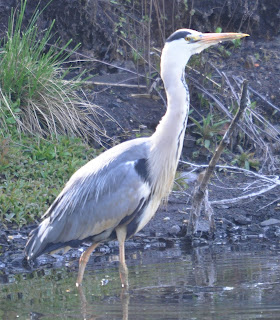 I didn't stay long at Edmonson Hide and was soon off looking for the newish Ramsdale's Hide which I hadn't been to before. I wasn't disappointed when I go there - a grey heron was right in front of the viewing windows and the closest I've ever been to one.

I took loads of photos, although, as John Taverner had mentioned earlier today, the light was starting to come from a bad direction. I'll need to get here earlier next time. 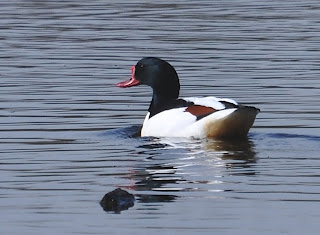 I also spotted some Gadwall, Shellduck, Blackheaded Gulls, Lapwing, Moorhen and Coot, but spent most time photographing the Heron. I made the classic beginners mistake of taking my eye off the bird to adjust the camera settings, when it flew off and I missed the chance of a flight shot. 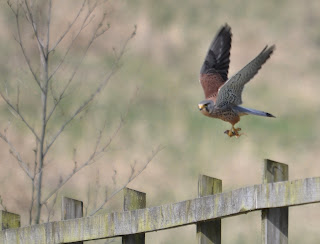 From Ramsdales Hide I walked on to Ramsdales Ruck as I never been round here before - this is where the Wheatear had been seen last night so I thought there was a chance it might still be there - no chance. However all was not lost as I soon saw a Kestrel hovering and then diving to the ground. When it surfaced it sat on a fence post long enough for me to get my camera out and attempt a couple of photographs. The Kestrel had caught a frog and as it flew overhead I could see its legs dangling from the bird's claws - my picture was however, rubbish! Here are the best two which, although they are a little blurred, have something about them I quite like. 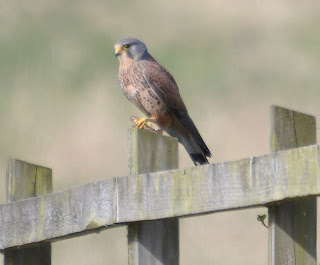 I also saw three Common Terns diving into the canal above me and making their familiar screeching noise, which I'd first heard on Anglesey last year. Again the pictures I took were all blurred as the birds were moving quickly overhead. As I carried on round the Ruck I could hear a Skylark singing way up high and I saw it drop quickly to the ground and disappear in the long grass. As I've already said, I've never been around this side of the Flash before and I'll definitely be coming back sometime soon. After taking a few pictures of the Flash from this side and some more of a Great Crested Grebe bobbing up and down on the choppy water, I decided it was time to head back. 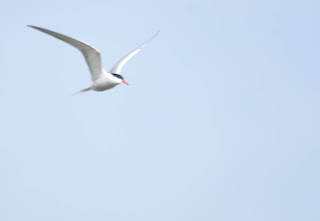 I returned to Horrocks Hide after a couple of hours of walking round the various pools and scrapes. Here I met up with John Tymon who kindly set up my camera the way he uses his D90 as well giving me some more useful tips. Using these settings I took a few more pictures of the Redshank as well as some of the Common Sandpiper, which was another first for me. I also spotted two Common Terns now basking in the sunshine on the spit as well as another on a nearby post. Finally, I saw a pair of Teal and some Gadwall which had joined the main gathering. 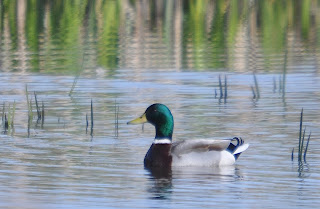 Just before I returned home I popped back into the feeding station at Bunting Hide to see if there was any more activity. I took some pictures using John T's settings but surprisingly there was still not much going on here today. They must have gone on holiday. The only thing new of any notes since my last visit was the Blue Tit nesting in the post hole. 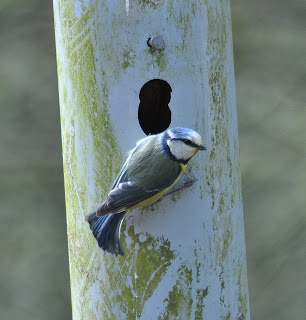 I think you can see from this one blog post why Pennington Flash is one the UK's premier birding sites - what a lot of variety in a relatively small place and today was a bad day for species numbers!
Posted by GeekTeacher at 10:27 No comments: