Today Sarah and I went for a drive up the motorway to Hest Bank near Morecambe.  Sarah had been wanting to see the Judges' Lodgings and Courtrooms in Lancaster Castle for ages and so the deal was that we'd go and do a spot of coastal birdwatching first at Hest Bank, and then come back into Lancaster later.

When we arrived at Hest Bank it took a while to decide exactly where the RSPB site was - in fact we never did find it!  We crossed over the railway line at the level crossing and parked up in the free car park overlooking Morecambe Bay, before returning to a small cafe for a cup of coffee and to ask for directions to the RSPB site.  After asking several people seems no-one round here knows where it is either!  It seems as if the RSPB may own an area of the shoreline here, but there is no actual visitor information or focal point.

After a coffee and a cake in the cafe, we set off for a short walk along the salt-marsh shoreline in search of birds.  Here's what we saw that we could identify:-

There's nothing I like better than hearing the sound of curlews calling on the shoreline and today I wasn't disappointed - we saw at least eight of them here.  I did want to positively identify some Knott or Dunlin but although I think I did see some, they weren't clear enough for me to be absolutely sure.

By the way, the hour guided tour around the Courtrooms and prison cells in Lancaster Castle was excellent, but lack of time meant we only got a brief glimpse of the Judges' Lodgings.  Strangely, Sarah didn't complain too much about this, probably because we'd had a good day out.  No pictures today though - it was a bit too dull and windy for most of the time.
Posted by GeekTeacher at 23:07 No comments:

Today I decided to try my new tripod out at Rumworth Lodge in Bolton, a place I've often driven past but never visited before. I wasn't impressed when it took me three attempts to find the right place to turn off the main road and park in the tiny parking area!

When I did get down to the 'viewing area' I was soaking wet from walking through the long dewy grass, but the location looked very promising. There were two islands on one side of the lodge and these seemed to have been gravelled for ground nesting birds. After setting up my scope, my first sighting was of a Grey Heron catching and eating a fish. There were also lots of gulls about in two shallow patches of water to the left and right of the two islands, mainly juvenile Black-headed Gulls but also a Great Black-backed Gull with a possible large juvenile too.

After scanning the water past the two islands I spotted a Great Crested Grebe sleeping on the water, and a Little Grebe and a Cormorant on the far side of the Lodge. There were also quite a few Swallows skimming the surface of the water catching flies as well as two parties of Mallard, one consisting of nine ducks and the other consisting of seven. I also caught a glimpse of what I think was a group of four Snipe in silhouette flying over the lodge.

I wasn't entirely sure of where I could go to view birds here and so I stuck to the 'viewing area' next to the fence - unfortunately this made it difficult to see past the two islands in the lodge and so I did walk a little further to the right to get a better view. This revealed two further Great Crested Grebes on the water in the distance.

After an hour or so the weather started to turn to light rain and I decided it was time to go but, just as I was setting off, I spotted another birder walking down to the Lodge. I always like to have a chat with other birders where possible to gain some local knowledge of a site and so, after my usual greeting, I asked him about where it was possible to walk around here. The birder was Steve Almond, a name I had frequently seen on the Manchester Birding Forum for Rumworth Lodge and he very kindly showed me around part of the site, poiting out some good viewing spots.

Steve told me he only goes birding around Rumworth Lodge, which is his local patch as he only lives a few hundred yards from it - he likes it mainly because it is largely underwatched and he doesn't run in to many other people as he rambles round on his own.

Well, Rumworth Lodge seems to be a great place for birding and I'll definitely be back when the season for passing migrants hots up later this month.
Posted by GeekTeacher at 18:31 No comments:

I was just getting back into birding this week and got off to a good start with an excellent sighting of a Kingfisher from Teal Hide at Penny. As I arrived at Teal Hide I was alerted to the bird being chased briefly by a Magpie by another person viewing who was even more excited about seeing it than I was. I hurredly set up my camera and managed to fire off a few shots of the Kingfisher sitting on a post surveying the water before it flew off. The pictures are not dead sharp but they're the best ones I got of a Kingfisher to date. 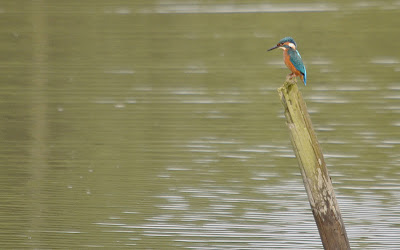 The other highlight from Teal Hide was seeing a pair of Green Sandpipers searching the scapes for food. Other birds included a Heron, Gadwall, Teal, Mallard, Coot, and Moorhen as well as numerous Magpies and Wood Piegons. 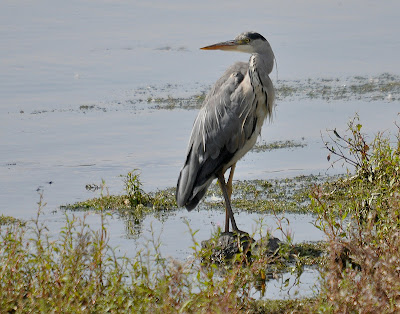 There was not much else about today at the other hides apart from the usuals although I later found out that a female Pintail had been seen.
Posted by GeekTeacher at 18:29 No comments:

Normal service will be resumed shortly

Due to the pressure of work, I've not posted here since our three baby Blue Tits fledged in May nearly three months ago. I've done relatively little birding since then and certainly nothing worth posting about. Well now that the work is done, I'll be posting again shortly.
Posted by GeekTeacher at 10:34 No comments: