Posted by GeekTeacher at 09:23 No comments:

I had a great day at Elton Reservoir in Bury today going to see the mega rare Little Bittern which has been here since yesterday.  After dipping on the two White-winged Black Terns that were here last weekend, I decided on a fairly early start (for me anyway) and I arrived at about 7.45am to find at least 20 birders there already staring avidly at a willow bush in the middle distance. The bird didn't show until around 9:40am and then only very briefly with most views obscured by vegetation. After another wait it reappeared at 11:30am when it came out into the open giving great views for a few tantalising moments before flying back into the trees behind the willow bush.

There must have 50 to 60 birders there at the peak viewing time, some from far flung corners of Northern England. Nice to see many familiar faces and meet some new ones, it was like a 'Who's Who' of GM Birding! And somehow the long wait before seeing the bird makes it even more exciting and special. There are some good photos around, but none from me I'm afraid. But like I said earlier, great day! Elton's having a bit of a purple patch at the moment and we're all wondering what's going to turn up next.


Oh, yes - I just had to use that title as the bird has not been seen since my visit.


Photos by other people on BirdGuides:

Here's one of the best taken by Jon Lowe yesterday (taken from BirdGuides):

Posted by GeekTeacher at 21:04 No comments: 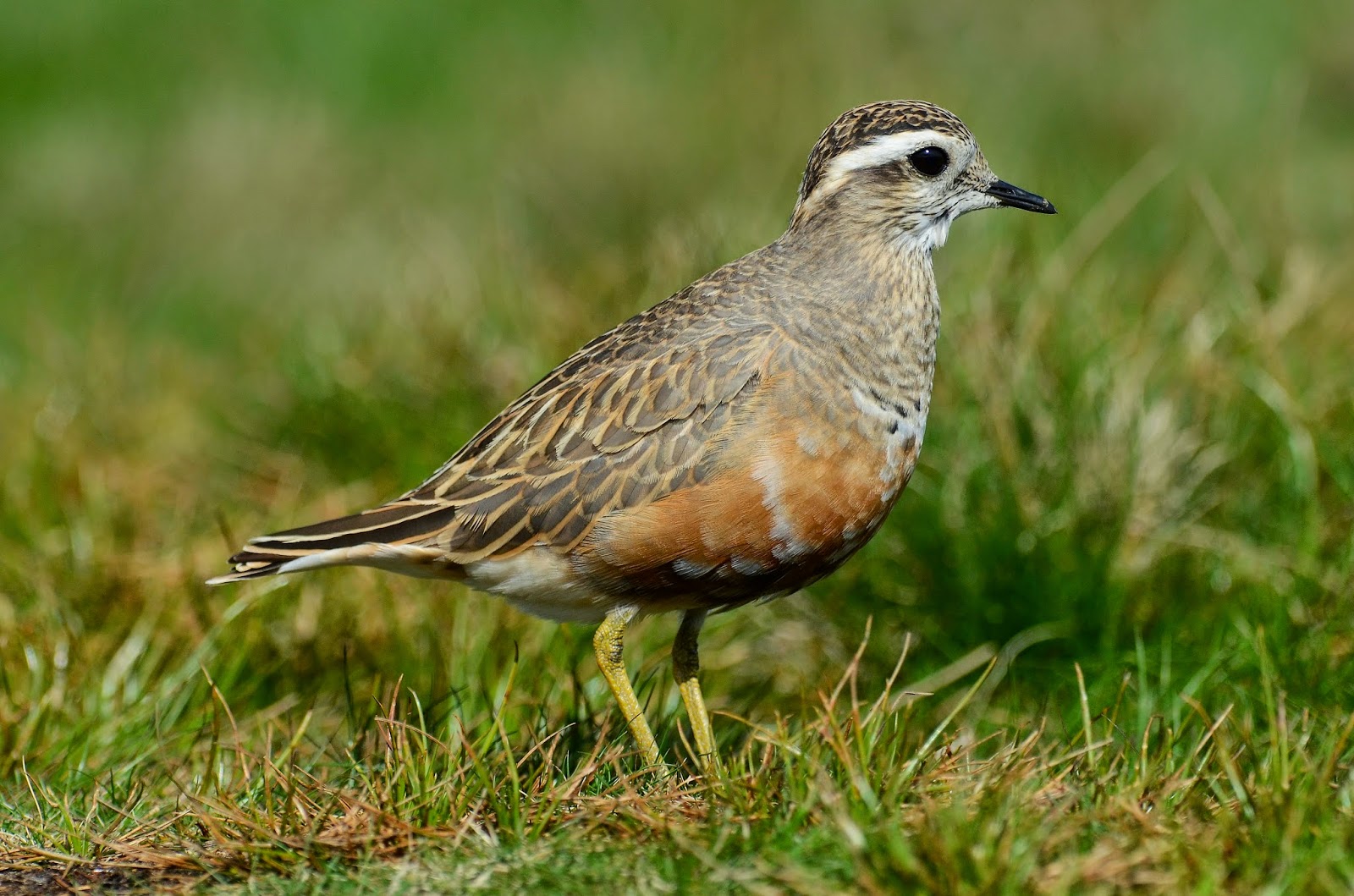 I had a fantastic day up Pendle Hill today, one I'll never forget. Not being the fit, slim(mer) or young bloke that I once was, I had severe issues thinking about the steep climb up Pendle carrying all my photographic gear in pretty hot weather. However, with reported Dotterel sightings yesterday and good weather, I decided to go for it, thinking I'd just take my time and set myself small targets to reach along the way with plenty of time to enjoy the scenery (no, not get my breath back). This worked for me and I made it to the trig point at the top in just less than 40 minutes, a time with which I was quite happy, in spite of meeting a couple of girls walking their dog who said they'd done it in 15 minutes and set themselves a new record! 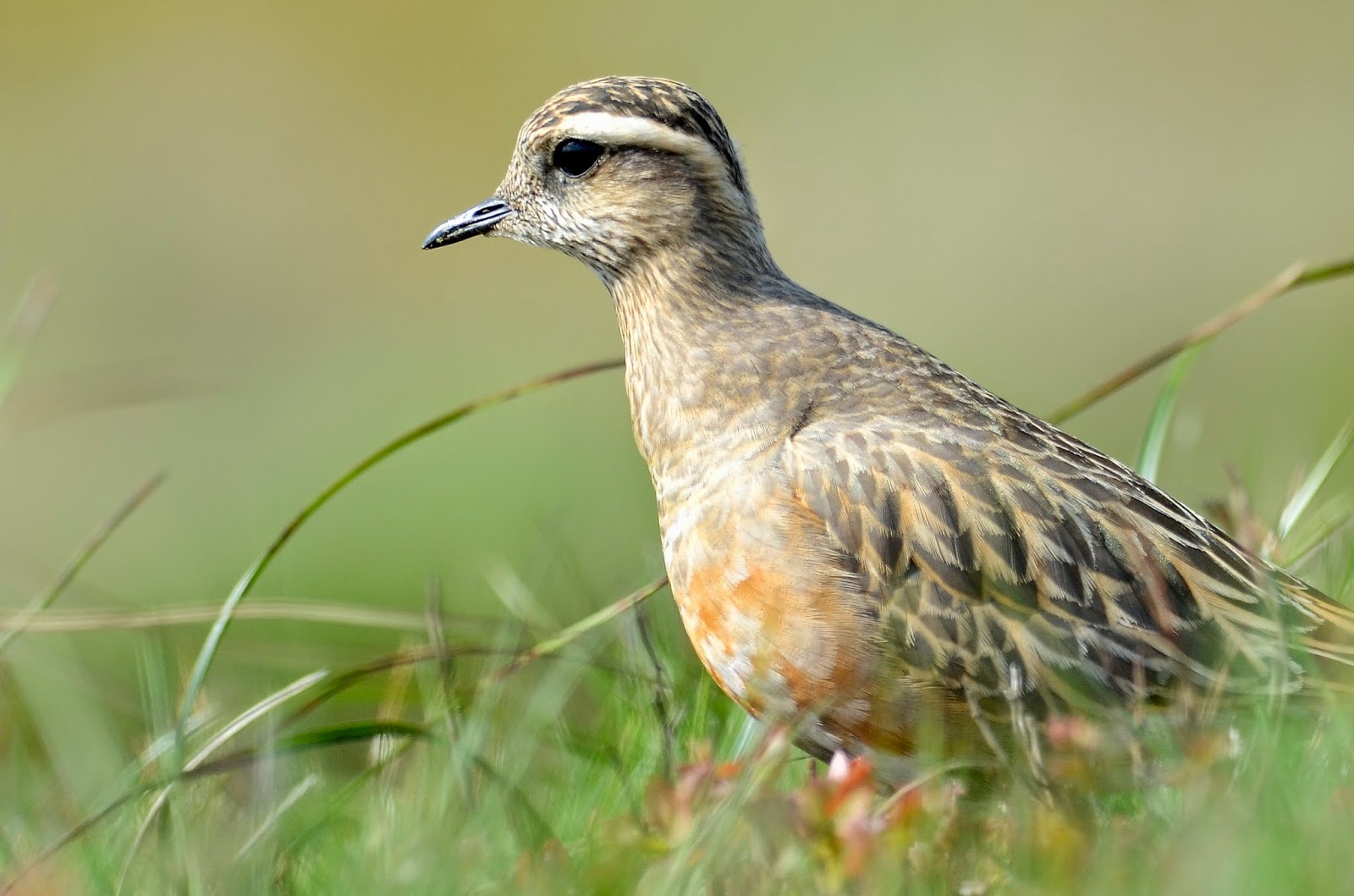 At the top it was very windy and even quite cold at times and there was nothing much about except for the odd Curlew call and plenty of singing Skylarks. Three Swifts (my first of the year) did shoot through at one point and so I thought things were looking up, but apart from some crows and maybe a couple of tumbling Ravens, I didn't see much else in my search for the Dotterel. I spoke to a bloke from Chorley Naturalists (sorry, I've forgotten your name) who usually sees the Dotterel here every year but who hadn't seen them today and he gave me a few pointers about areas they've favoured in the past. Another local birder told me he had toured the whole area and not seen them today, so things weren't looking good. 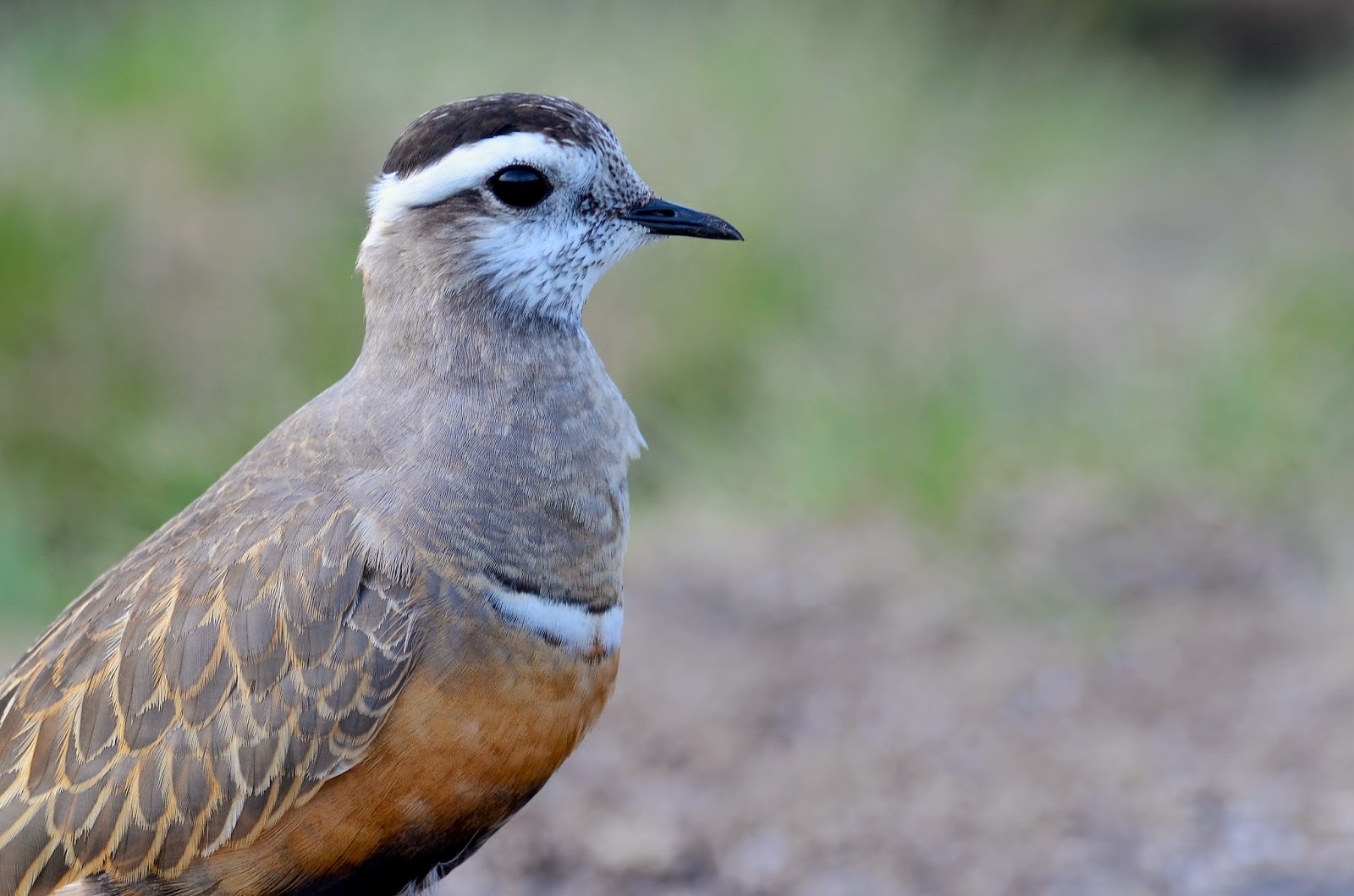 I spent an hour or so in the area around the trig point with no luck, and a couple of birders who'd come up from the Sabden path in the opposite direction to me said they hadn't seen them on the way. Whilst I was talking to them, a small bird of prey flashed past flying low over the top of Pendle Hill, which we both agreed must have been a Merlin. With this news of no sightings I was beginning to think I'd be out of luck today, so I decided to try the path along to the Scout Hut cairn which I'd been told earlier was a favoured place. However, apart from some very low flying Skylarks, some Meadow Pipits and a lone Red Grouse flying over the path, there was very little else. 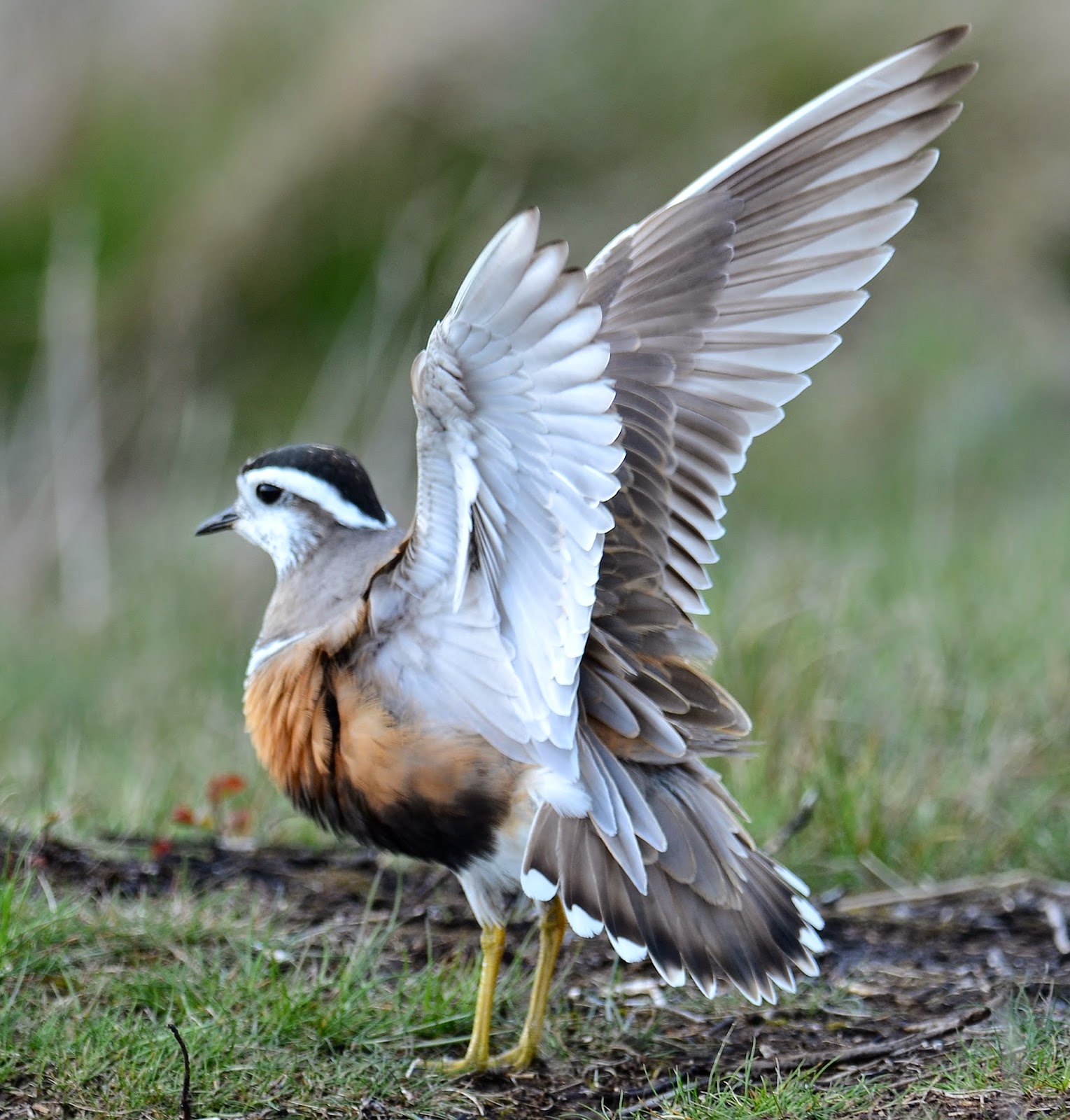 Feeling a bit fed up I decided to try the trig point area again before giving up and going home, as this seemed to be where all the event reports had been. Lucky I did because quite by chance I met another local birder on the plateau near the trig point, and he told me he had just seen two and possibly four Dotterel in this area, but they had flown down the path towards Sabden. When I told him I'd never seen a Dotterel, he very kindly said he'd take me to exact place he'd seen them, which was about half a mile or more down the Sabden path in the area of the fifth small cairn on this route. We walked down the path and after a few false alarms with Skylarks and Wheatears, I eventually spotted one and then two and eventually all four Dotterel about 30 metres to the right of the path. Bingo and lifer! There were two male and two beautifully marked female birds. 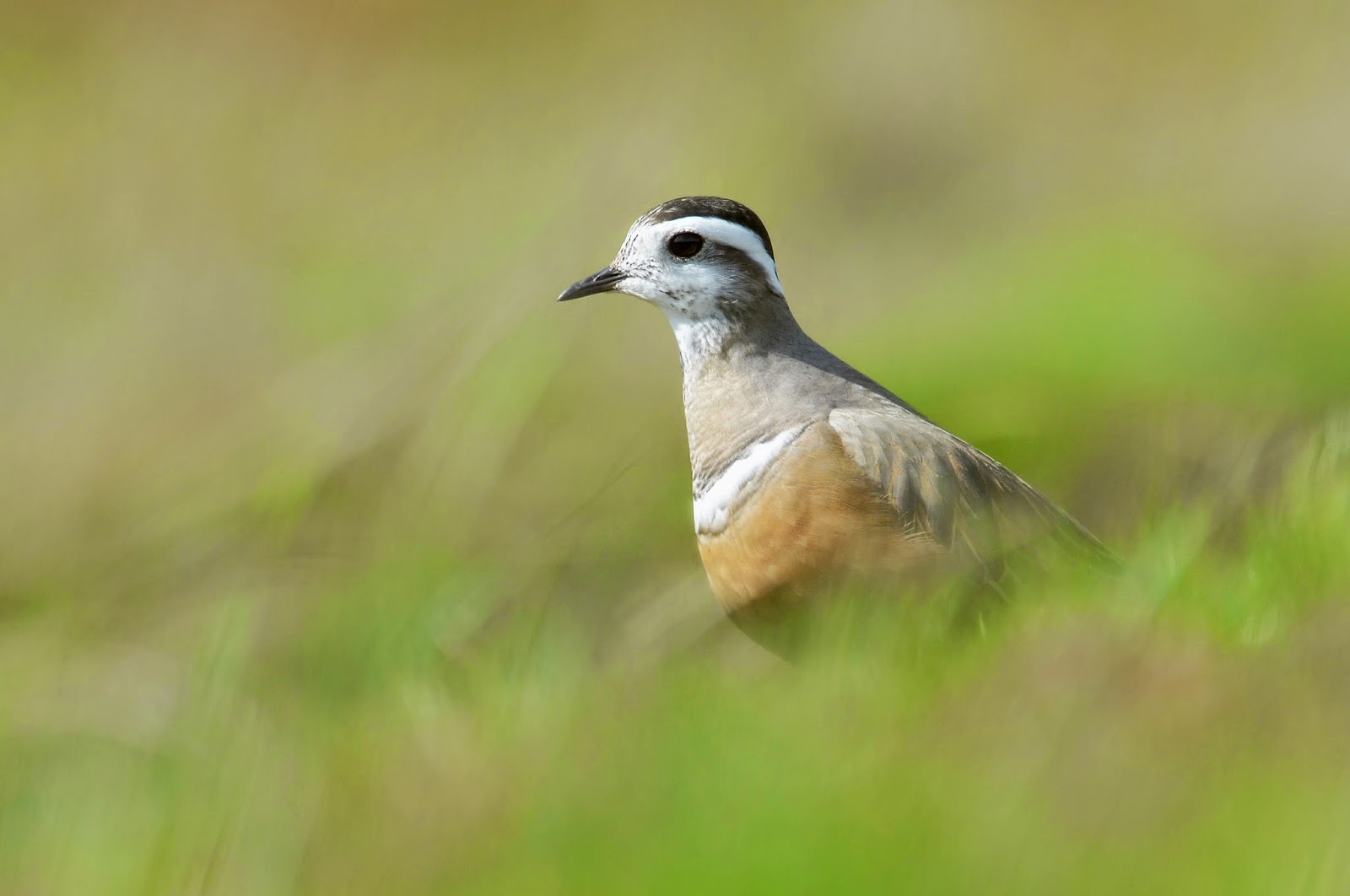 We were soon joined by four other birders who were all keen like me to get some photographs. So after everyone had had a good look by observing the birds through binoculars, we slowly approached them until we got down to a reasonable distance. Then we all snapped happily to our hearts' content with the birds down to three of four metres on average. At one point we all lay down in the grass along the path and the birds walked closer and closer and eventually walked past us to within one metre, so close I couldn't focus. I knew Dotterel were pretty confiding, but I was half expecting one to jump up on my lens. 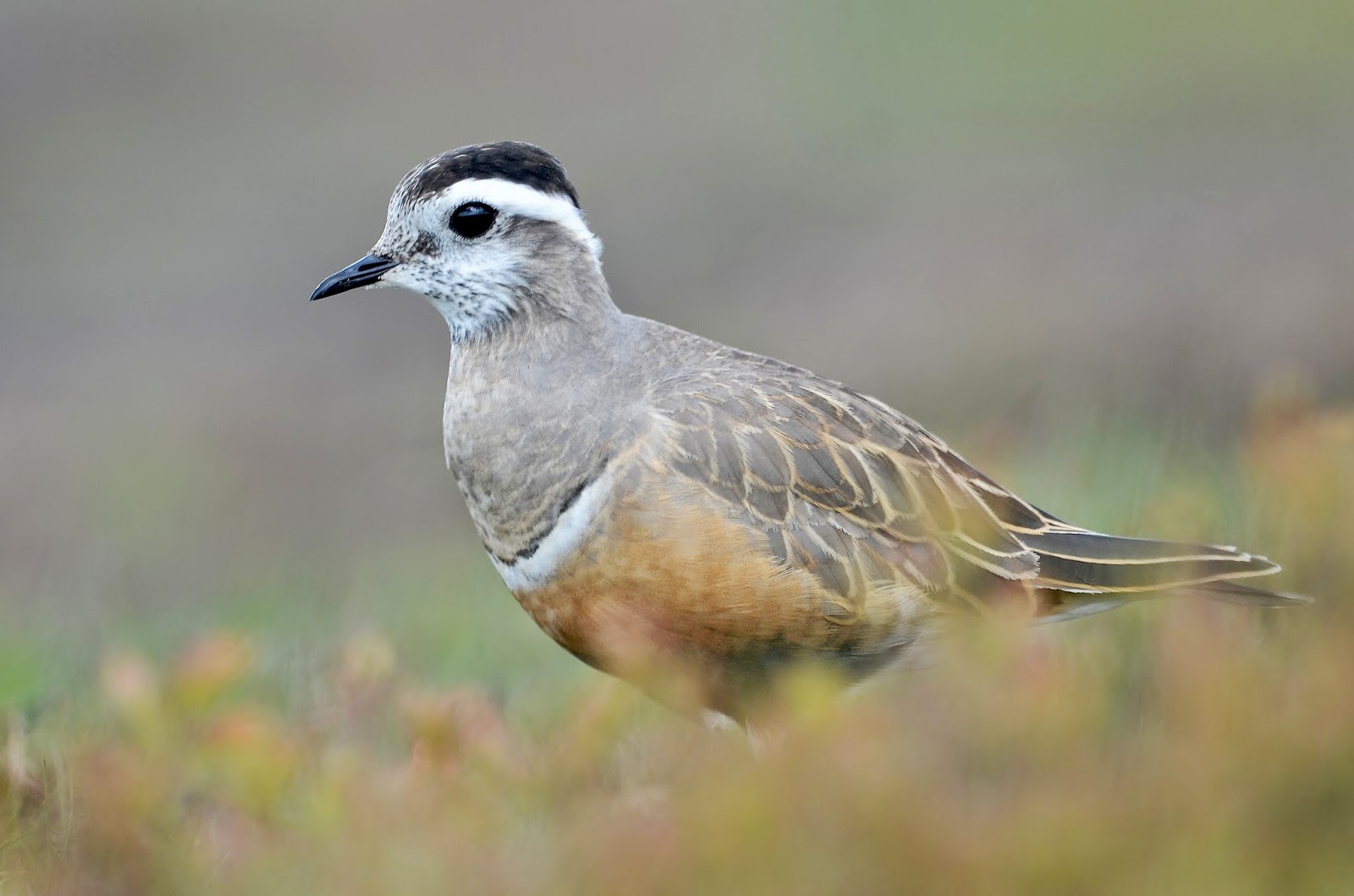 This was a truly amazing birding experience and like I said earlier, one I'll never forget. Thanks must go to the original local birder who took me to the birds and who did tell me his name, but which now escapes me. It was also nice to meet the couple from Knaresborough and Gareth Hughes and his Dad, who helped guide the birds in our direction for photos. They are some of the best bird photos I've ever taken, true frame fillers, and they'll soon be my Flickr site. 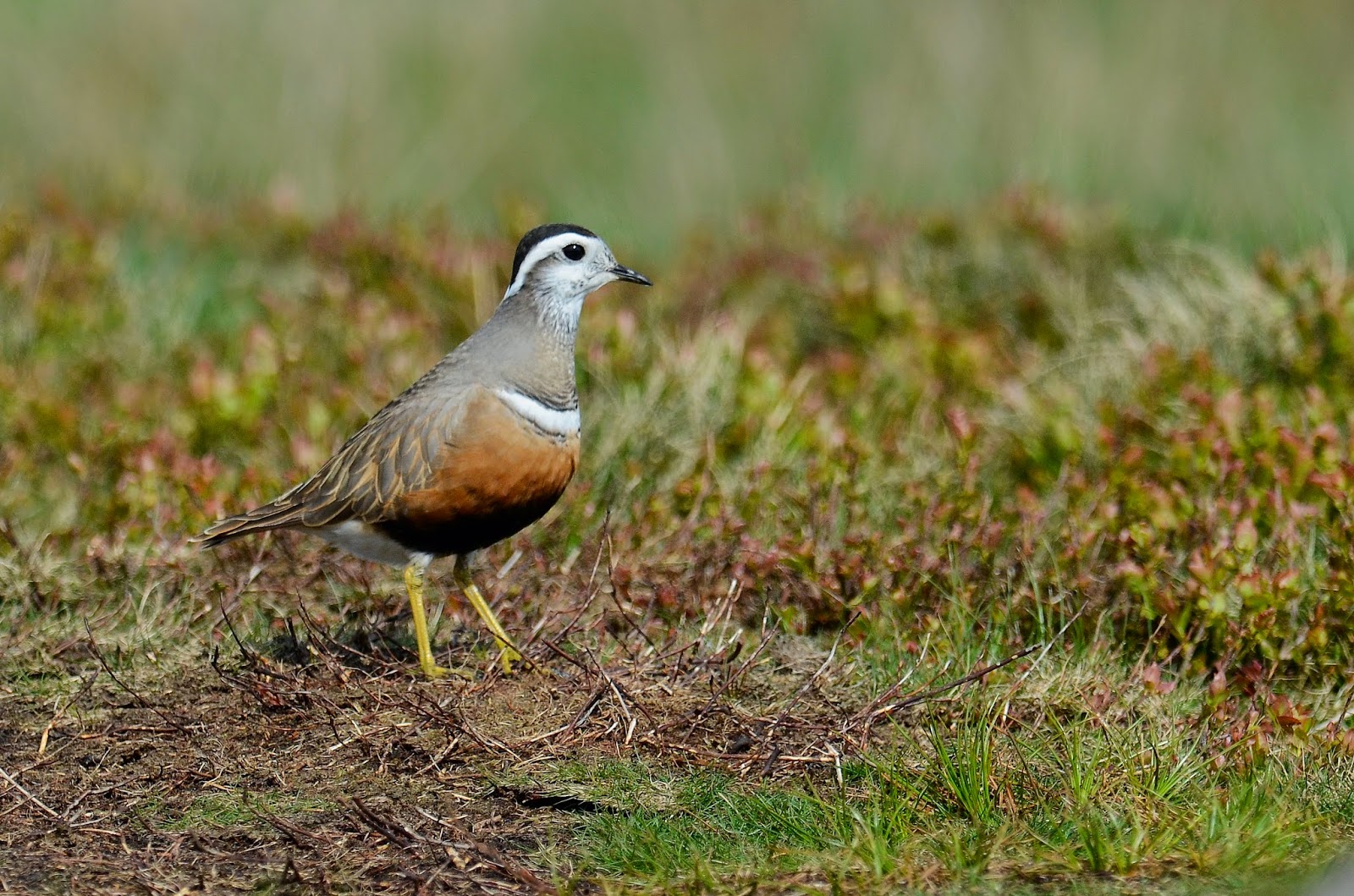 Gareth Hughes has just sent me this great photo: 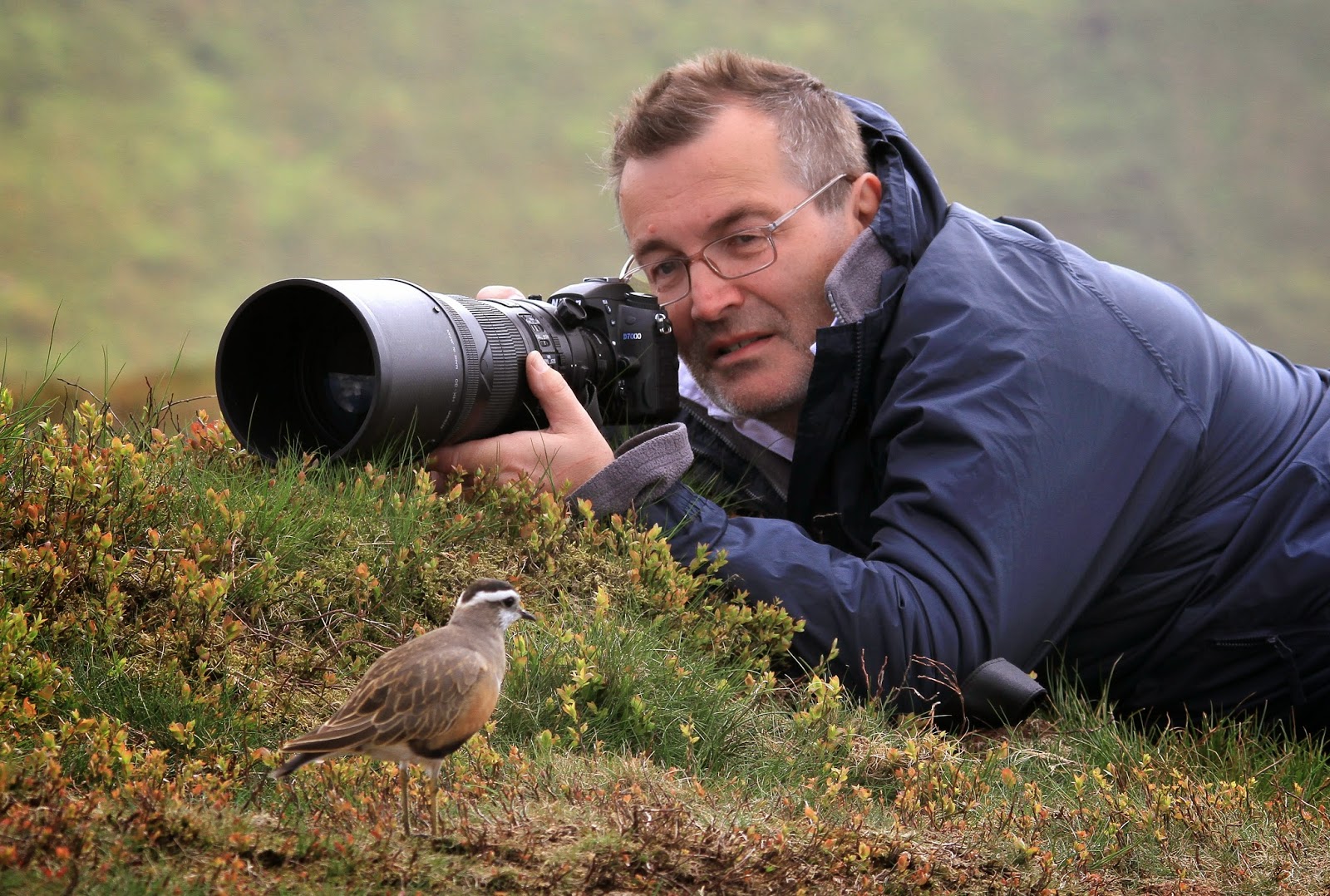 I told you it was close!
Posted by GeekTeacher at 22:51 3 comments: