Shooting for the Stars

I've been interested in taking photographs of the night sky for a few years now, but other than taking a few shots of the sun and moon on various eclipses and at other notable times, I've never got my act together to shoot for the stars. Having seen a number of Milky Way photographs coming out of North Wales this year, I decided it was time to try to get some myself. 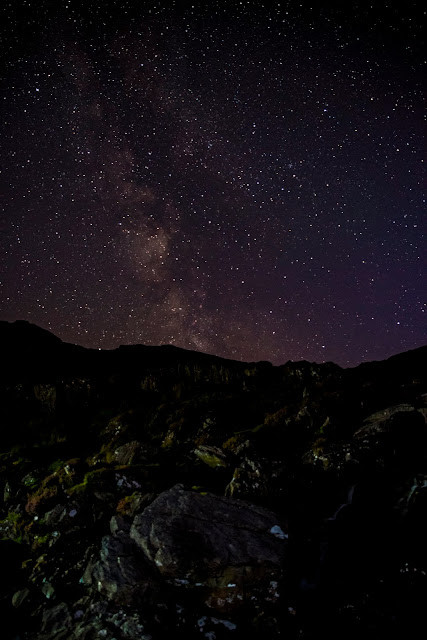 So after I'd spent the day in Snowdonia with Pete Lawless, I decided that I'd stay on and try for some Milky Way shots myself.  The original idea was to meet up with the two most prolific night sky photographers in the area, but somehow the plans went awry and I was contacted on what proved to be an excellent night for photography. 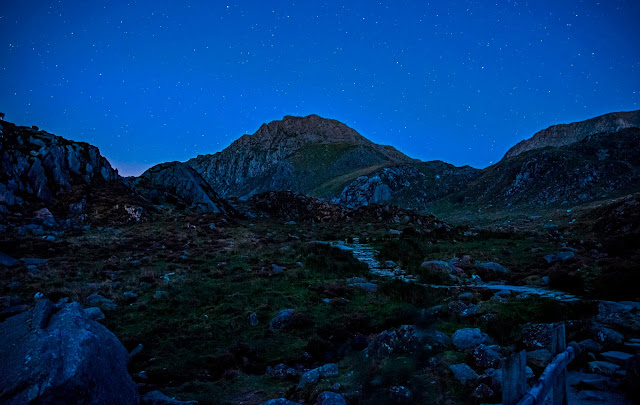 So I was left to my own devices and I ended up revisiting a place that Pete and I had been to during the day to do some landscape shots - Cwm Idwal. I decided on this as I had already familiarised myself with the landscape and footpaths and this was going to be very useful as I wandered around in the dark. 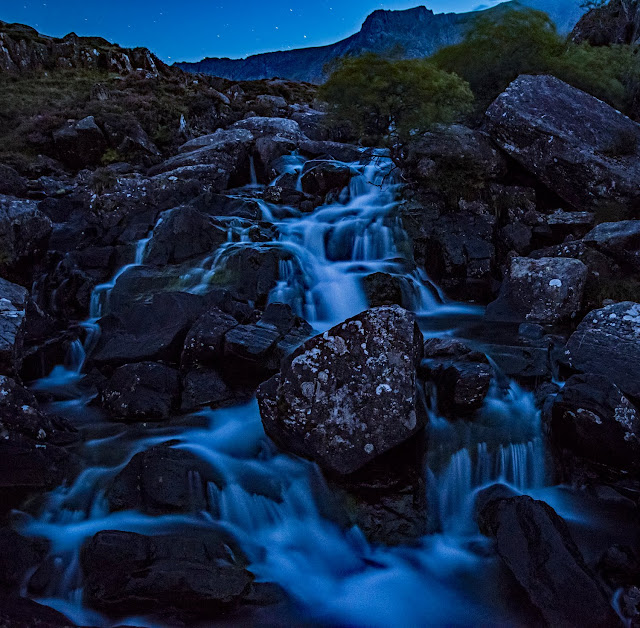 I'd prepared reasonably well by packing a couple of torches and warm clothing and I'd recently bought the PhotoPills app for my phone which helped to show where the Milky Way would be in the sky and at what time. I'd also be practicing taking photos in the back garden to get familiar with my camera controls when you can't really see your hands in front of your face. 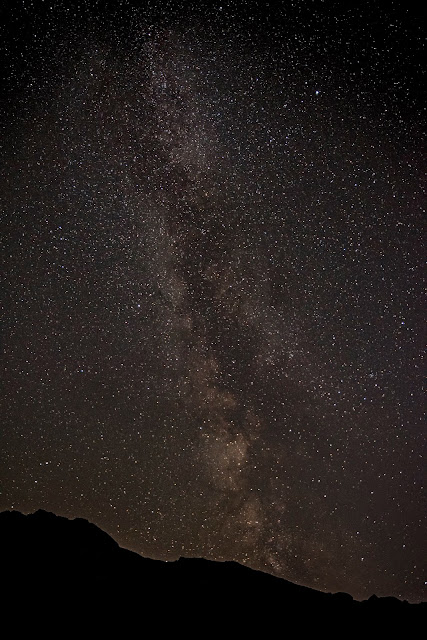 Surprisingly though, it wasn't quite as dark as I'd expected because there were some lights in the nearby cottages and the odd car passed by on the A5 road below me. But what really opened my eyes as I stood on the bridge looking over the Afon Ogwen Falls, was the number of people who were wandering about in the dark at 11pm at night!  There were headlamps camping on top of Pen yr Ole Wen and Tryfan, lights coming down the steep slopes of both mountains and people going up to Cwm Idwal to wild camp overnight. 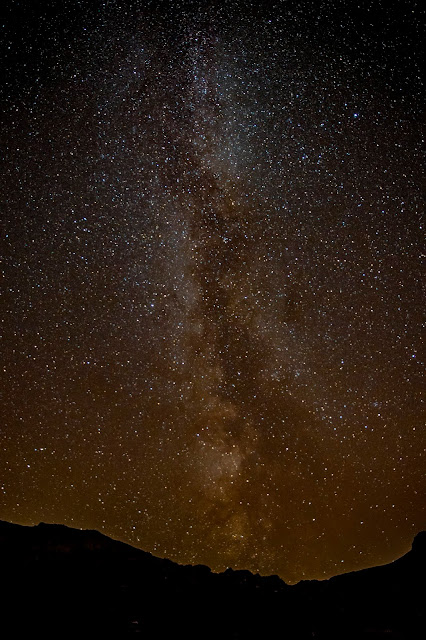 So at the end of a very long day, I went back to the car hoping to find a pub on the way home as I was starving and desperate for a pint of lager shandy. But I'd left it too late and all I could find was a Tesco Express which I just managed to get in before closing.  I bought two drinks and a sandwich and drove home hoping that some of the shots would be half decent. A great day out and it was quite an experience, believe me.
Posted by GeekTeacher at 21:25 No comments:

With summer being a generally quiet season for birding, my thoughts had recently turned to landscape photography. I say recently, I've always been interested in taking landscape photos and it's probably the subject I've photographed the most throughout my life, but never really seriously. I've often realised two things - taking photographs when the sun is shining brightly in the middle of the day is not a good idea, and secondly, you really do near some filters to expose landscape scenes correctly. Of course, the location is also very important too. 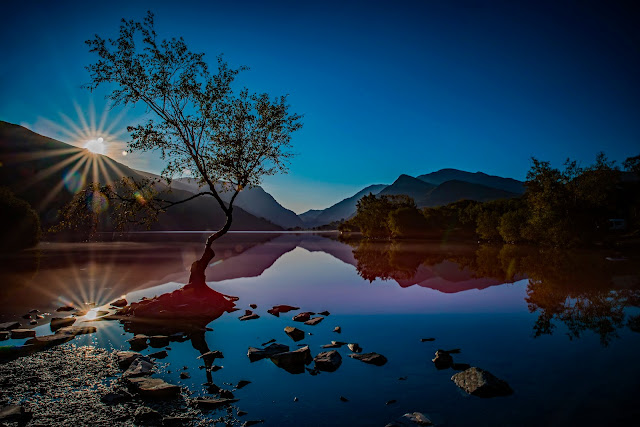 I'd first met Pete Lawless earlier in the year at Parkgate whilst we were taking photos of the long-staying Short-eared Owls that were present and through Facebook I'd noticed that he also like doing landscape photography and indeed had taken some excellent landscape shots.  So I contacted him and he very kindly agreed to meet up with me in North Wales and show me some of the places he knows make good subjects. 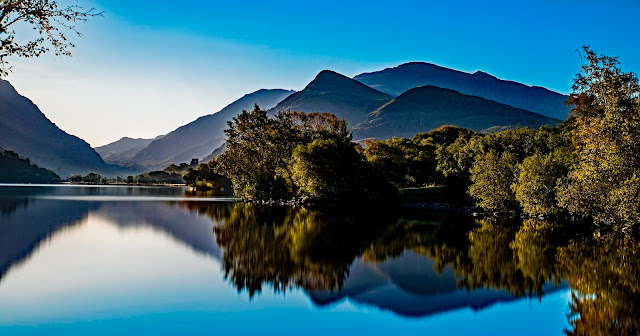 I left Tyldesley at around 5am to meet Pete at 6am just outside Queensferry and then we drove to Llyn Padarn which is home to the Lonely Tree, probably the most photographed tree in the whole of Wales.  It didn't look that much when I first saw it, but its place in the composition of so many photographs has given it legendary status. 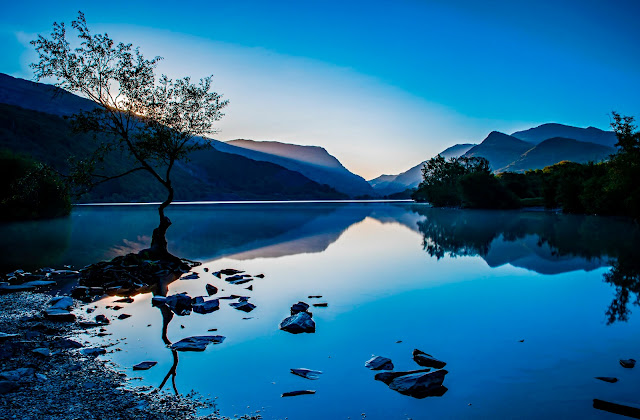 There were already half a dozen people there when we arrived at just after 7am, all with the same aim in mind.  To get some shots of this idyllic setting before and as the sun came up from behind the mountains at the far end of the lake. Everyone here was using neutral density filters to smooth out the water and balance the exposure between sky and the lake and this is one of the main things I was hoping to learn about from Pete.  He very kindly lent me his 'Big Stopper' and 0.6 graduated ND filter to take the above shots, as well as helping me out with the required exposure time.

From Llyn Padarn we moved on to Cwm Idwal at the head of the Nant Francon valley, driving through Pen y Pass and Capel Curig to get there. It'd been a long time since I was last here in Snowdonia, at least 10 years and then some 20 years previously to that. So although I was not totally unfamiliar with the area, it was great to remember the details of the area.  As we drove down the Ogwen Valley, Tryfan reared it's mighty head to my left and memories of my first and only ascent came flooding back to me. But more on that later. 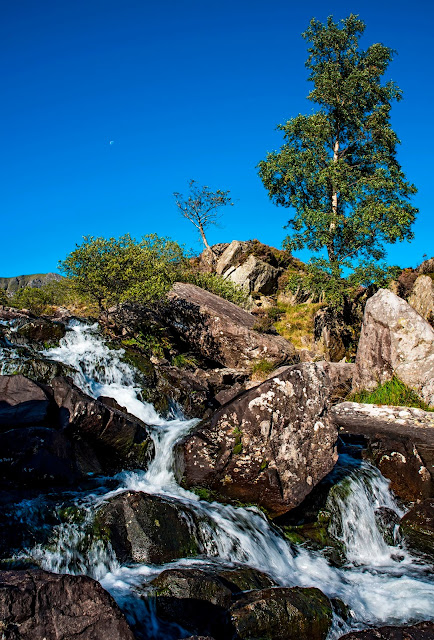 After parking in the National Trust car park, our first stop was on the lower wooden bridge at Ogwen Falls, where the Afon Ogwen stream flows out of Llyn Idwal and down the valley.  This was the place for some classic blurry waterfall shots and again Pete lent me of one of his filters, this time a 'Little Stopper' and a 0.6 ND grad. However, instead of putting them directly into my own filter holder, I decided to just attach it to my lens using Pete's holder for speed. I thought it didn't seem tight enough when I put it on, but I waggled it around and it didn't come off, so I carried on and used them for the above shots. We had to climb down off the bridge and perch awkwardly on some of the rocks to get into a good position for these shots. 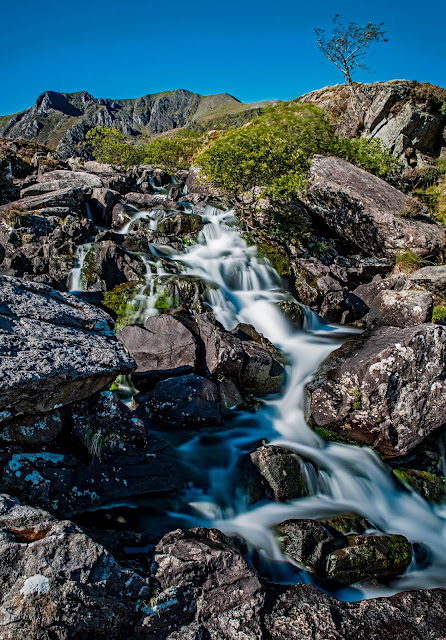 But when I stood up and took the camera off the tripod in order to put it safely back on the bridge whilst I climbed back off the rocks, the filter holder fell off the end of my lens and smashed into the hard rocks below.  My heart sank and I just hoped that at least one of the filters had survived - no such luck.  The very expensive glass 'Little Stopper' had cracked completely in two and the ND grad filter had gained two scuff marks right in the middle of the plastic. To say I was mortified was an understatement. 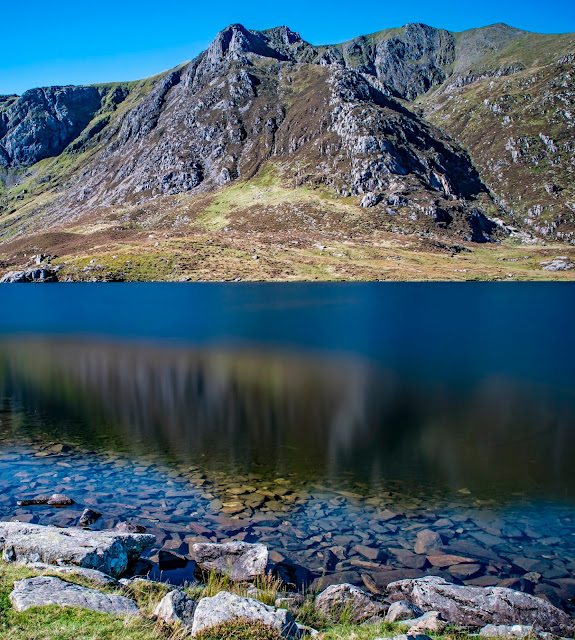 I apologised many times in the next few minutes and quite a few time later as well. Naturally I offered to pay for it as I know they are not at all cheap. But Pete, to his very great credit passed it all off as 'just one of those things' and told me 'not to worry about it'. This could have put a damper on the whole trip (and to be honest, it did bother me all day and even now) but we carried on up to Cwm Idwal and tried to forget about it. 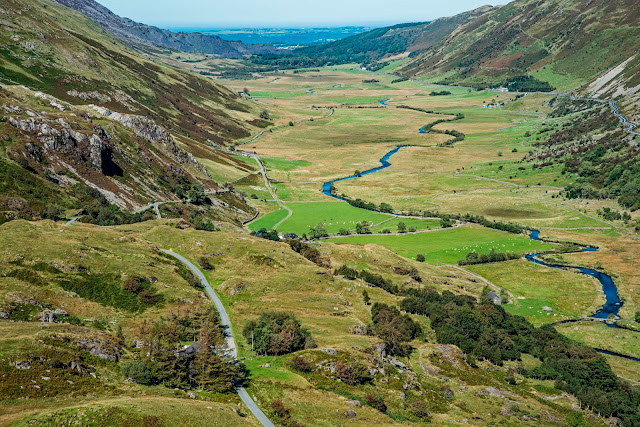 As soon as I got up to Llyn Idwal, the elongated lake in Cwm Idwal, my former geography and geology training kicked it.  The whole landscape is a product of glaciation and this very area features in many textbooks due to its classic examples of the landforms. 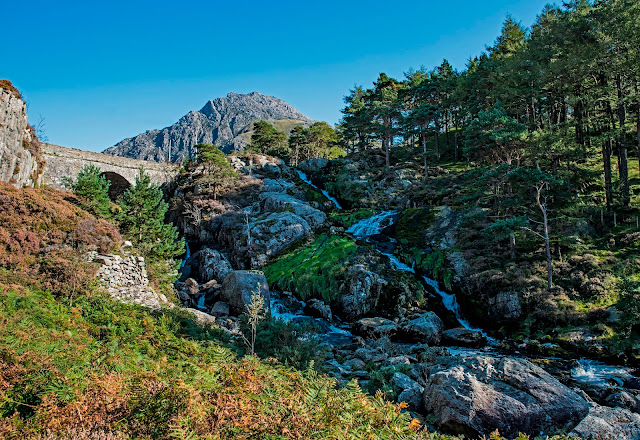 We have a bowl-shaped cwm with a steep frost-shattered back wall and a lake, lots of roche moutonnée and striation marks and further down into Nant Francon we have a rock step which forms the Ogwen Falls that lead in to the wide glaciated valley that is Nant Ffrancon with its meandering misfit stream and hanging valleys, an absolute classic view! 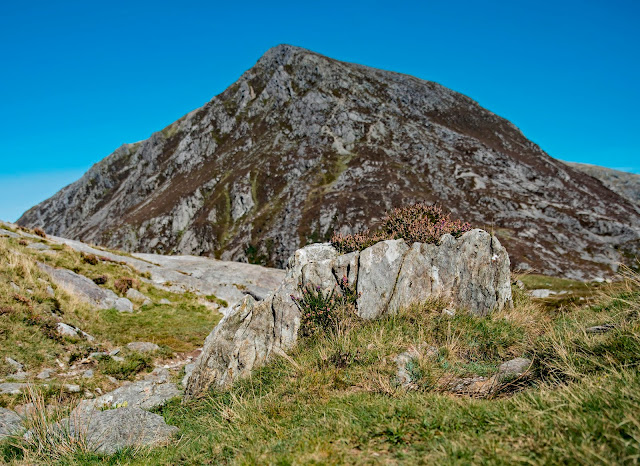 As well the previous mentioned features there are aretes or knife edge ridges, pyramidal peaks, scree slopes formed by frost-shattering and various types of moraine. All within a very short distance  - it's a superb place to come for a geography or geology field trip and of course I had to give Pete a glacial geomorphology lesson but he said, very politely, that he actually enjoyed it! 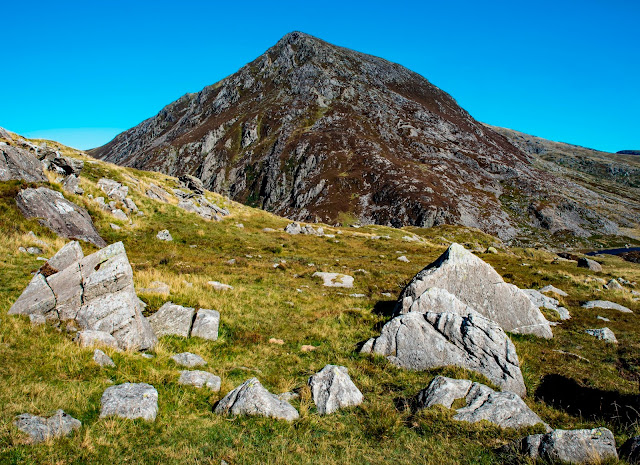 But back to the photography now - one of the things that photographers are always looking out for when doing landscape shots is some foreground interest which gives the photograph a sense of depth and scale.  In the above photos I managed to find a small rock which mirrors the pyramidal shape of the huge Pen yr Ole Wen in the background.
A similar effect is achieved with the rocks in the foreground of this shot of Tryfan. But the harsh sunlight and shadows have made some of these shots look a bit like the 'technicolor' tourist picture postcards you see in shops with their over-saturated colours. 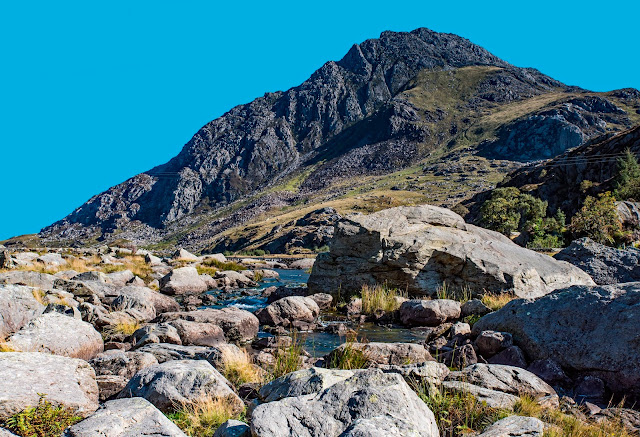 So back to Tryfan - back in my youth when I was studying too become a teacher at Trinity College Carmarthen (Colleg y Drindod) in South Wales, I came up to Snowdonia as part of a PE course I was doing.  It was a well-talked about trip by all the previous students because it involved scrambling up Tryfan and also Crib Goch on the way up to Snowdon, mainly focusing on how terrifying it was.  I can't remember which mountain which climbed first but the weather was awful and the views weren't great, unlike the drops in certain places. 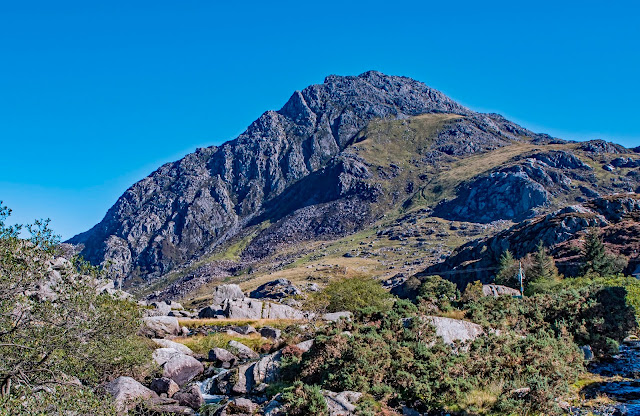 I was more scared going up Tryfan than the knife-edged ridge which is Crib Goch, which I actually quite enjoyed and it was probably a god thing for me that the viability was poor.  One thing that has always stuck in my mind was seeing the Mountain Goats running up and down the almost sheer rock faces as we ascended. When I qualified as a teacher I went on to do a degree in Geology and Geography at Manchester University (yes, I know, a backwards way of doing it, but I was young) and I think it was mainly this trip that was instrumental in getting me interested in rocks and the landscape, although I had always liked rock music (hehe!).

I'd love to do it all again, but my current physique and general fitness probably wouldn't allow it nowadays. But you never know. Anyway, I had really a great day out with Pete, despite the filter catastrophe, and I hope that we do it again sometime soon, once I've got some filters of my own.
Posted by GeekTeacher at 20:29 No comments: 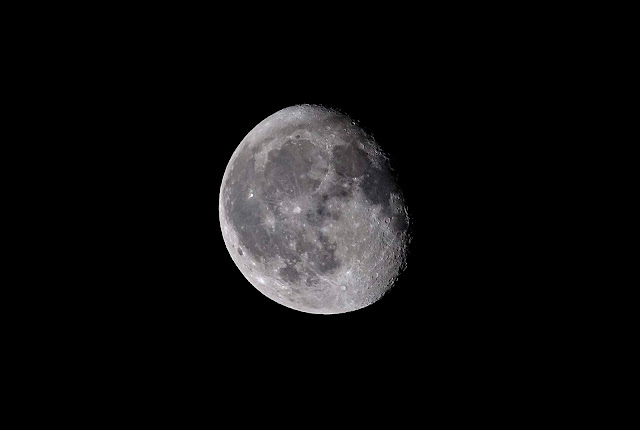 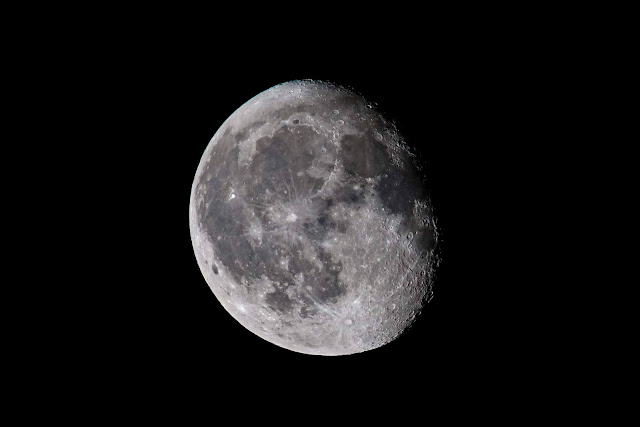 Posted by GeekTeacher at 22:49 No comments: 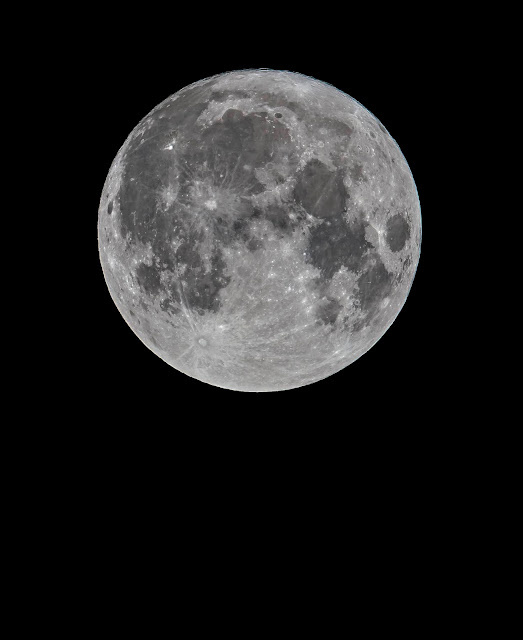 Posted by GeekTeacher at 22:42 No comments: