I'd recently noticed that Woodcock were being seen fairly regularly at Risley Moss and so I contacted Jonathan Platt, a regular contributor on the Manchester Birding Forum thread.  Jonathan very kindly agreed to meet me at 3:30pm outside the visitor centre there to show me where the Woodcock could be viewed. There was also a chance of also seeing a Short-eared Owl.

When we got to the observation tower we were met by Dave Beeton, Brian Riley and another birder who had been there for a while.  However, they hadn't seen any Owls or Woodcock.

Although there was a small break in the dismal weather we've been having recently, the light didn't last long at this time and it was also getting quite misty across the moss.  I was quite astonished at Jonathan and David talking about birds I couldn't see in the far distance across the gloomy landscape - they must both have far better eyesight than me!

We saw quite a lot of Jackdaws and Carrion Crows going to roost, and heard a few Snipe moving through the vegetation in front of us. There were also some Yellowhammers setting down in the bushes and a fairly constant stream of Blackbirds flying into Rhododendron bushes on the moss.  Jonathan told me that he'd previously seen a Sparrowhawk waiting along the Blackbirds' flight path trying to choose which one to 'pick off' before finally going for one.

By now it was quite dark and normally I would have set off for home a while ago, but both David and Jonathan kept saying that the Woodcock would come.  And sure enough they did - nine of them flew past in ones and twos over a ten minute period with their unmistakable shape and rapid wing-beat silhouetted against the lighter parts of the evening sky.

It was quite an experience that I would have missed had I been out there on my own.  The Woodcock is another 'lifer' for my slowly expanding list, so thanks very much lads, hope to see you again sometime.
Posted by GeekTeacher at 19:56 No comments:

OK it's not the sharpest of shots, but at least I got one!  The lighting conditions at Bunting Hide, Pennington Flash were poor resulting in a high ISO / low shutterspeed shot, coupled with the fact that the bird stayed as far away as possible - but it's my best Brambling shot to date.

Posted by GeekTeacher at 19:30 No comments:

Here's a selection of photos from a recent trip to Mere Sands Wood Nature Reserve:

Posted by GeekTeacher at 10:58 No comments:

The sun was shining this afternoon so I took some bird food down to the feeding track at Rindle Road, Astley.  The track has been used for feeding birds for some years now and Leigh Ornithological Society (L.O.S.) are one of the main contributors of food along with a few other generous individual birders.

It was nice to meet up with Dave Thacker at the feeding track as I hadn't seen him for quite some time.  Dave is an avid birder and he almost treats this area as if it is his own back garden.  He is very knowledgeable about all wildlife matters, particularly in this area and so we had a good chat about such things.  And it turns out that Dave is now a grandad, so congratulations to him, his daughter and family.

Whilst I chewed the fat with Dave we saw a Brambling, a Yellowhammer, a Jay, two Willow Tits as well as several Blue Tits, Great Tits and Chaffinches.

After Dave had left to go the dentist, I took some bird food down to the track. Unfortunately the hanging feeders have been stolen several times in the past and so recently L.O.S. had put just one more feeder there - it was with some dismay that I noticed that it had been taken yet again.  The only way to combat this is to spread the food on the floor and that is indeed what I did.

I then viewed the track from a distance using my scope, getting good views of all the birds previously mentioned but particularly good views of the Brambling which was my target bird for today.  A couple of Collared Doves, a Robin and a Blackbird also put in an appearance just before I went back to the car for my camera.

When I returned a Buzzard was circling low over Rindle Wood but I was quick enough to get a photo before it disappeared behind the trees. I took a few photos of the birds feeding on the track, but the sun was very low and quite harsh, casting shadows over parts of the birds - nevertheless I got a few record shots of the Brambling.

I then walked down towards Rindle Wood in the hope of seeing some different birds but there were very few about. So after only fifteen minutes I decided to go back to the feeding track and take some photos from a different viewpoint.  By now a Mistle Thrush was making quite a lot of noise in the tallest birch tree and two Tree Sparrows, two Greenfinches and a single Goldfinch were feeding on the track along with the Brambling and other birds.  As I took more photos along the feeding track, I noticed a Kestrel land on another of the taller trees and a second Mistle Thrush chased the first one out of the tree.  There were also a lot of Woodpigeons flying over the fields in this area.

The last two birds I saw today were a pair of Fieldfare which flew swiftly out of Rindle Wood, over the feeding track and into the hawthorn hedge along Rindle Road.

Posted by GeekTeacher at 19:10 No comments:

Jay goes nuts for a bag of monkeys! 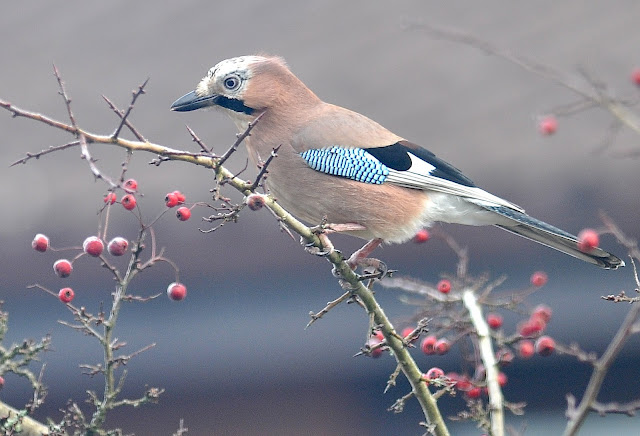 The monkey nut trick worked in my own back garden today!  I put some down late yesterday and when I got up today they had almost all gone - I thought it must be either a squirrel or a Jay that had taken them.  As Sarah had arisen earlier and was working in the room overlooking the back garden, I asked if she had seen any largish birds in the garden, to which she replied that she's seen a pinkish bird which she thought might have been just a collared dove. 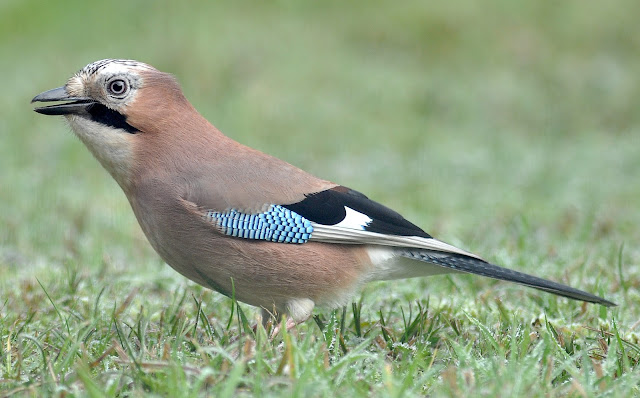 Well, I thought it might in fact be a Jay and so I kept looking out of the kitchen window for the next half hour. All of sudden a Jay appeared on the fence and it was trying to get the last few nuts out of a home-made feeder I had suspended from one of my feeding stations.  The bird flew off the fence and picked out a nut in flight before returning to the fence.  It did this four times and so could store at least four monkey nuts in its gullet, which is quite an amazing feat on it's own. Then it flew off to bury them somewhere for the winter.

Whilst the Jay was away I opened the patio windows and threw some more monkey nuts on to the lawn about four metres from the house and lay in wait in the house with my camera. However, it was so cold I couldn't leave the windows open for any longer than about 10 minutes and I had to close them. 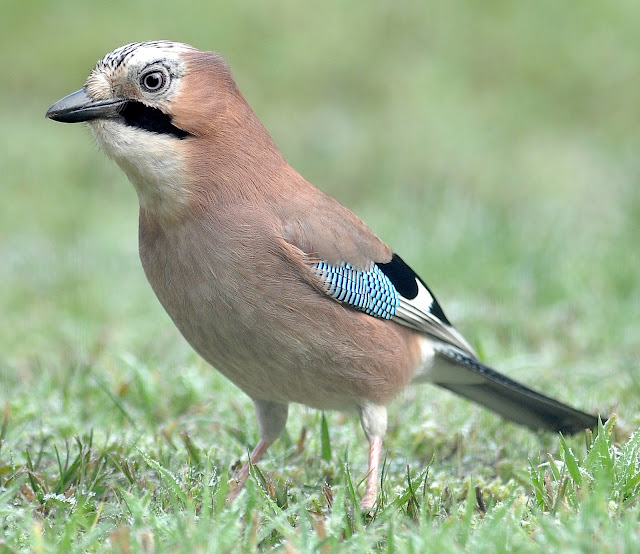 Five minutes or so later the bird returned and, after flying from tree to tree for a while, spotted the nuts on the lawn and came down to collect them.  I couldn't reopen the patio because I knew it would scare this skittish bird. So I had to shoot the photos through the glass, but even so I'm quite pleased with them.  This is the closest I've ever had Jays in my garden and it's all thanks to Alan Flavell's monkey nut trick.  Cheers Alan!
Posted by GeekTeacher at 23:09 2 comments: