The UK's gone Spoonbill crazy at the moment. Here's some video of the four that were present at Leighton Moss today. It starts with a wide shot showing Little Egret, Grey Heron, Avocet and Shelduck for size comparison and continues with a bit of preening and finishes with some wading and feeding. I've added some music to cover the wind noise and the people talking in the hide.

Posted by GeekTeacher at 21:56 No comments:

I went to Leighton Moss today, and boy, I've never seen the large pool in front of Lillian's Hide so dry. Apparently it's due to management and not drought or other problems - they're keeping the water levels low to encourage new reed growth for Bitterns to breed in. They've not bred there for a couple of years and the RSPB seem to think it may be due to the current reed bed being quite old and in need of regeneration. This Spoonbill shot was taken at the Eric Morecambe Hide, but more on that later. 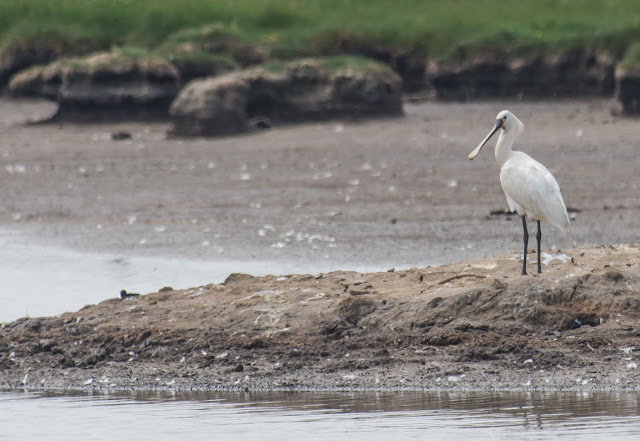 They say keeping the water levels low encourages reed growth and it's planned to be like this for another year. I was told that the impact on the other wildlife is not significant enough to be concerned about. I suppose they must know what they're doing, but it looks rather strange, especially when they've just built that Sky Tower hide which mostly over looks dried up pools and desiccation cracks at the moment. I only saw two birds in the whole of that area today.

There wasn't much more at the Public Hide, now rebuilt and called the 'Causeway Hide', but a female Marsh Harrier did put in a couple of distant appearances whilst I was there. 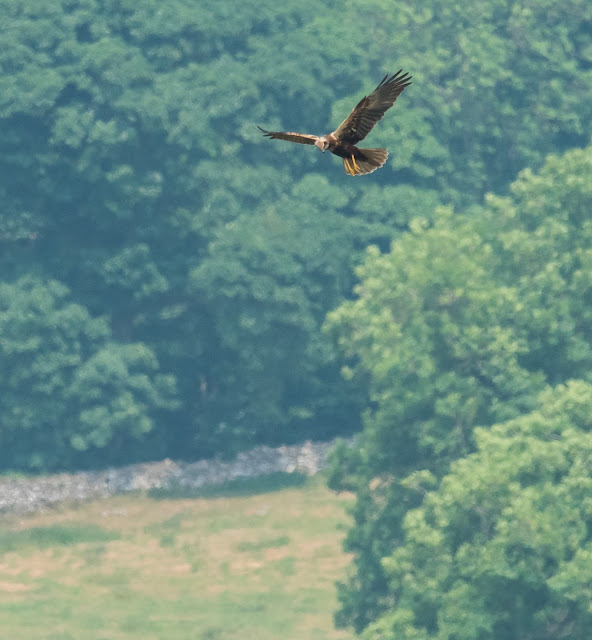 After speaking to a couple of people about what was there, I decided not to go to the Lower Hide, but on my way back to the car a Carrion Crow was sitting in a tree along the causeway. It didn't seem at all bothered my presence and so I got fairly close. 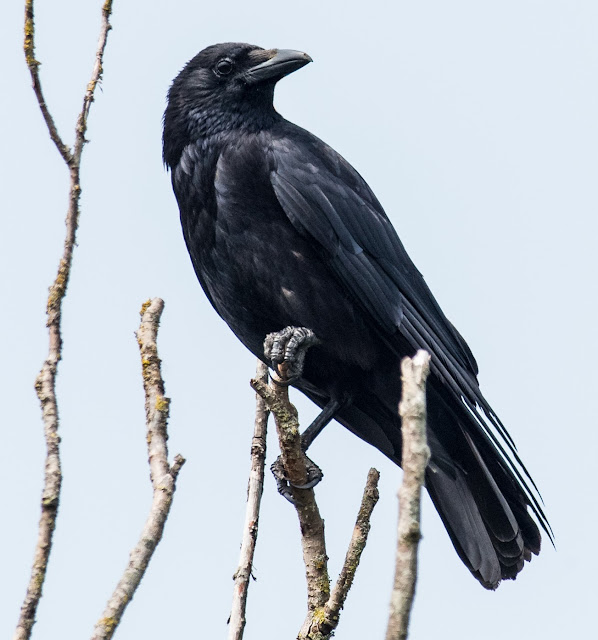 As is so often the case when I visit, the best hides for birds were those on the salt marshes where four Spoonbills were present at the Eric Morecambe Hide. At first there was only the one, but later two more appeared and finally a fourth. I've also seen three at Burton Mere Wetlands RSPB this month as well as one at Marshside RSPB and it's great to see that there are many more of these fantastic birds about in the UK - we seem to have gone Spoonbill crazy! 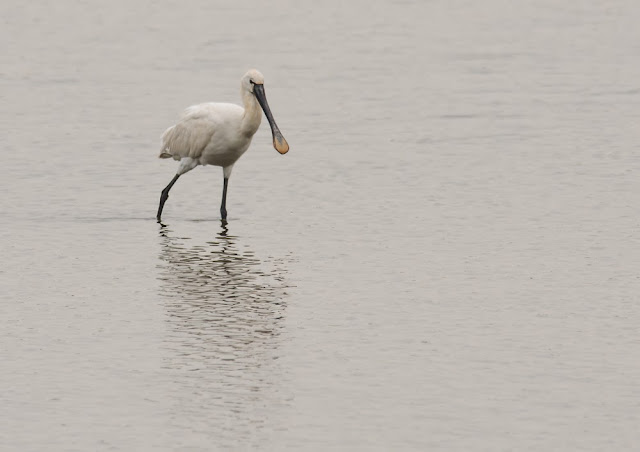 There were also many Avocets, at least nine Little Egrets, four Redshank, many Lapwing and a few Shelduck and Oystercatchers. 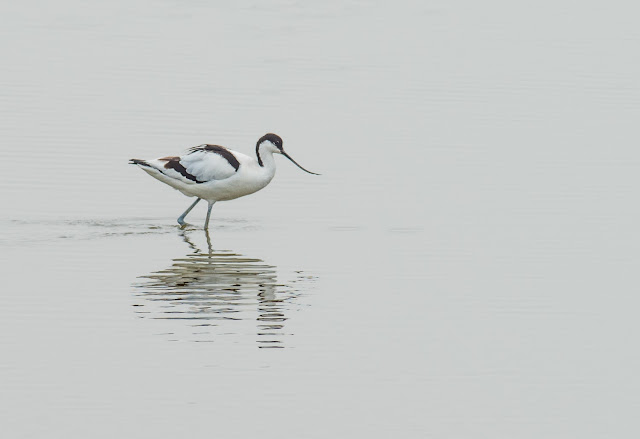 One Oystercatcher was sat on a nest with three eggs on a patch of dry land in front of the hide. This is something I've not seen before here as usually there is a lot more water about. There were even sheep grazing on the grassy islands in front of the Allen Hide, again something which I've never seen before. 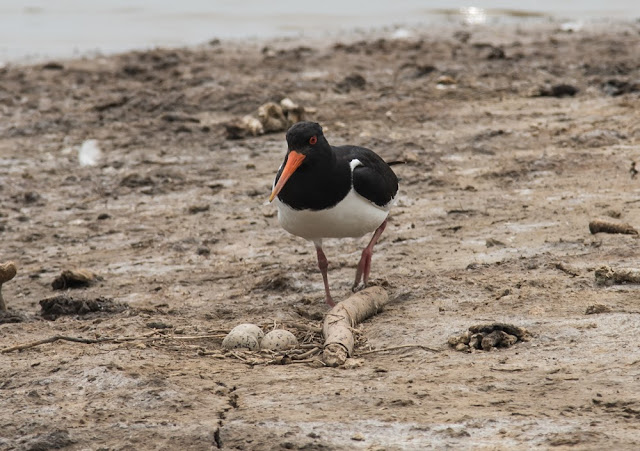 Finally, there was a very vociferous Cetti's Warbler right outside the door of the hide whose song echoed so much that it seemed to be inside the hide at times. But as usual, no photos of that one. 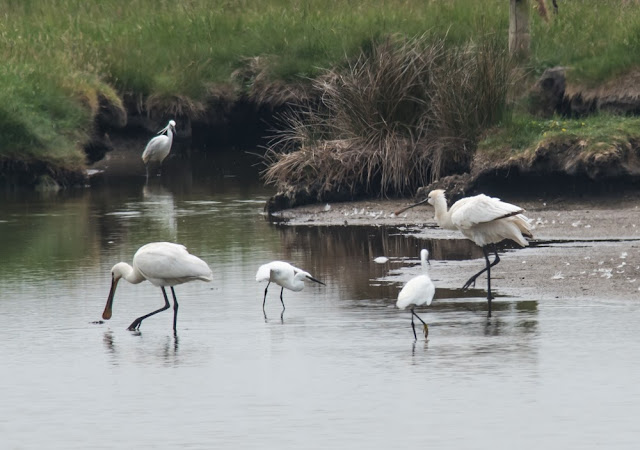 Posted by GeekTeacher at 20:37 No comments:

Dippers on the River Yarrow Revisited

It's been a while since I first saw the Dippers at the weir on the River Yarrow earlier this year. They were nest-building at the time and so the first brood will have hatched and dispersed by now. However, as Dippers often have two and sometimes even three broods in a year, I decided to return today to see how they were getting on. 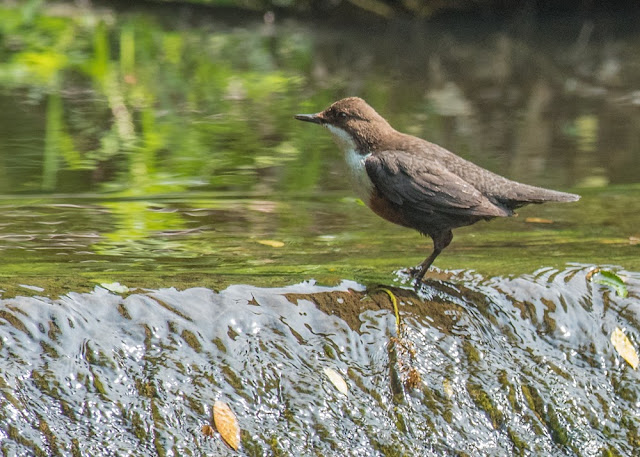 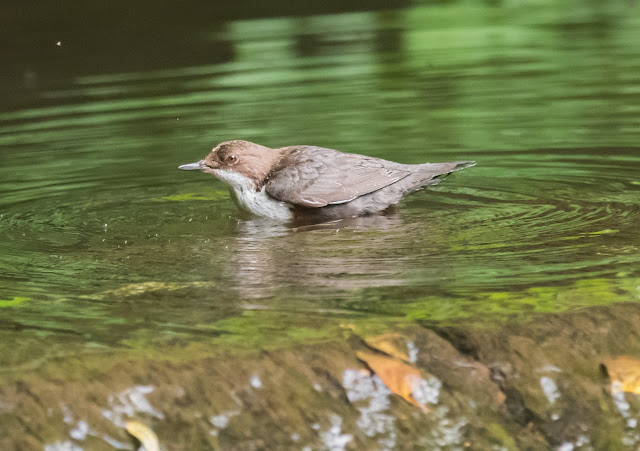 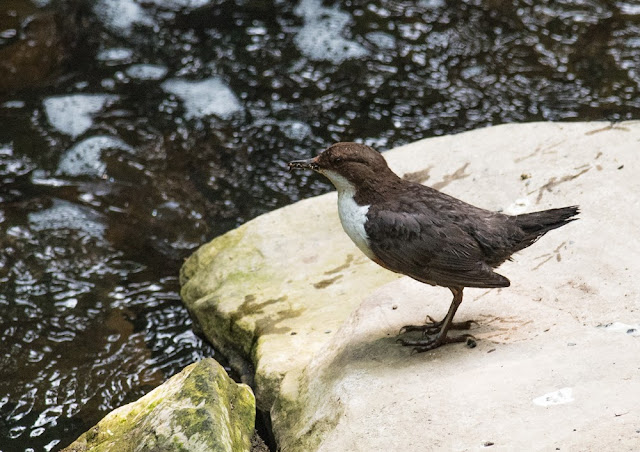 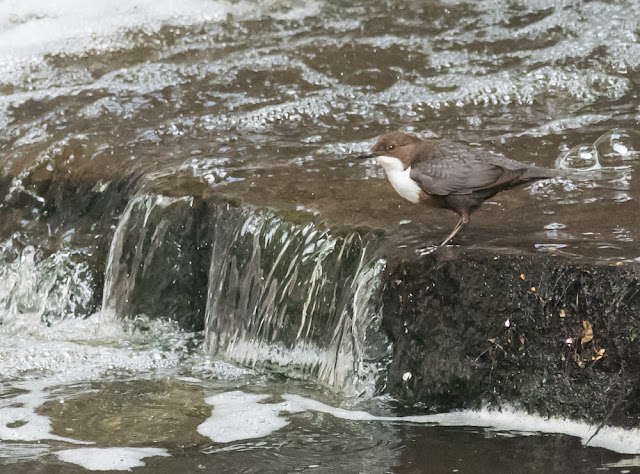 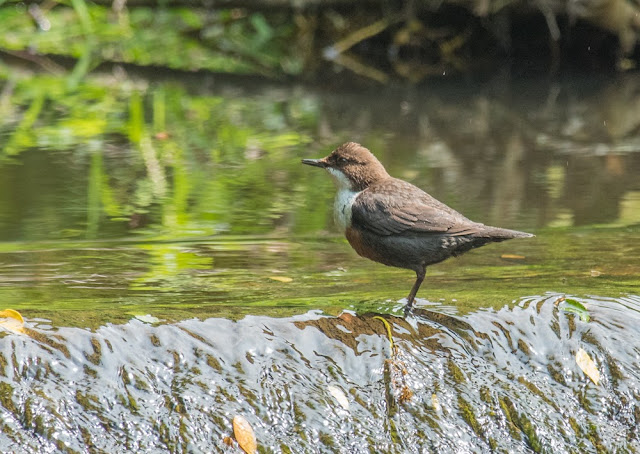 I'd spotted a single Common Tern over the lake when I first arrived and so I stopped for a shot on the way back. I still couldn't see evidence of any other Terns about. 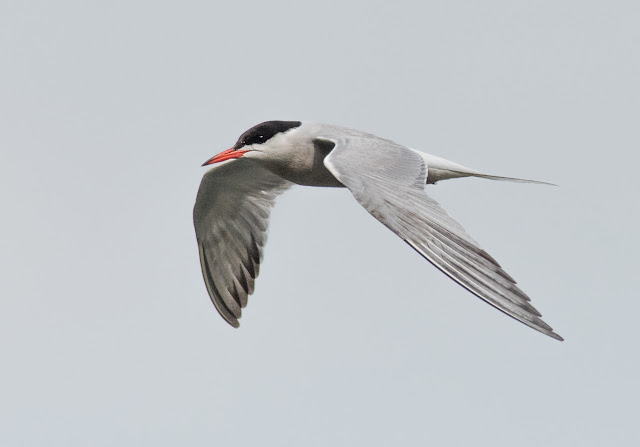 This Common Buzzard flew over the lake as I watched the Tern. It was shrieking quite a lot and it was occasionally mobbed by Carrion Crows. 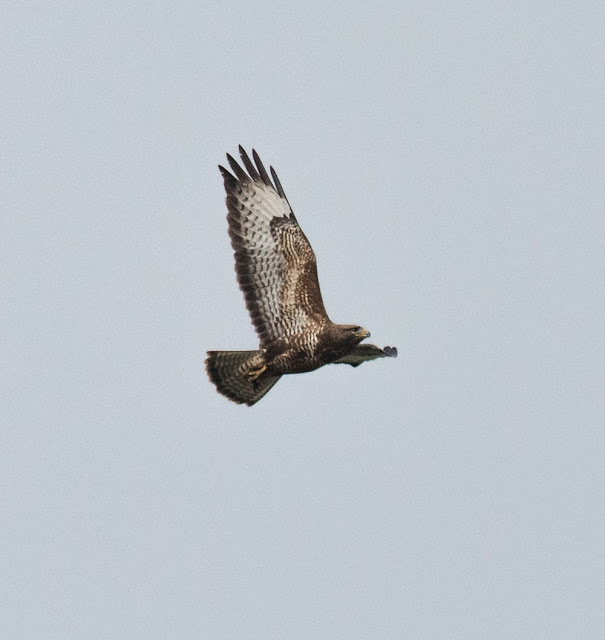 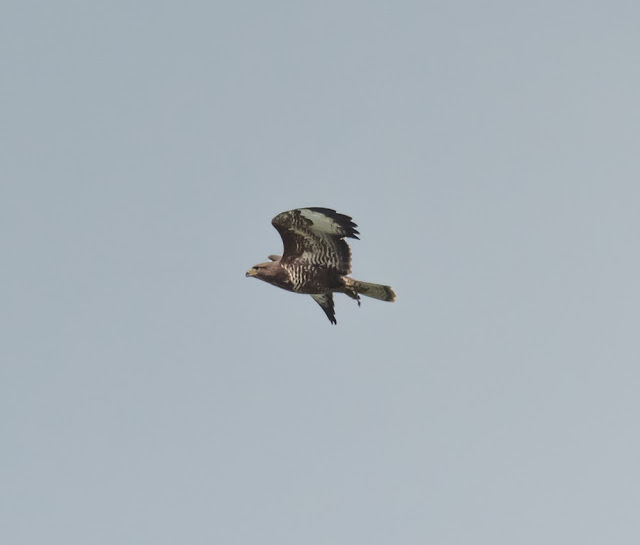 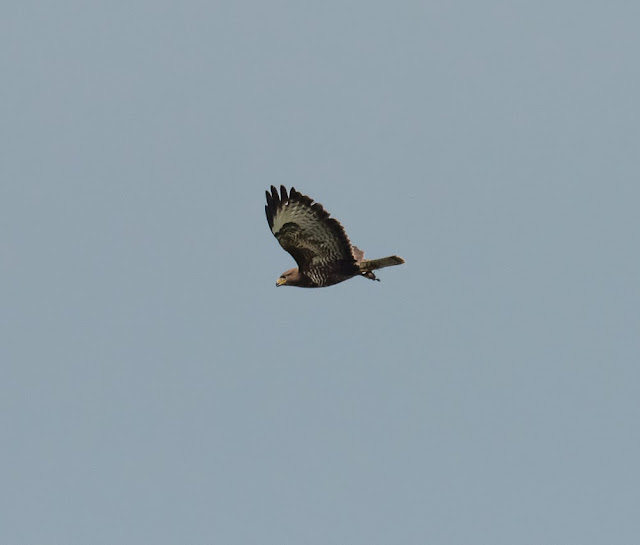 There was a pair of Great Crested Grebes nesting under the overhanging vegetation on the far side of the lake. Here's one of them doing a bit of nest strengthening. 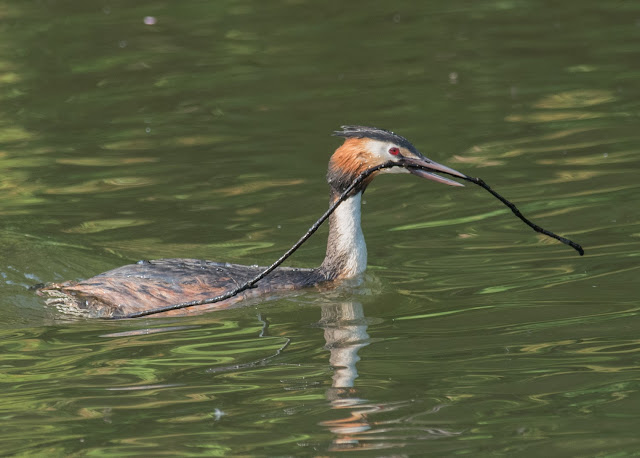 The Tern was catching fish and taking it back to the floating raft where it obviously had bred this year. When I looked closer at might my photographs I could see that there were two young, but only one adult bird was present. Perhaps it had been predated. And then, as I was leaving I noticed something in the water near where the Tern was perched on the floating raft. Is is just a fish, or perhaps worse, a mink? I can't quite make it out. 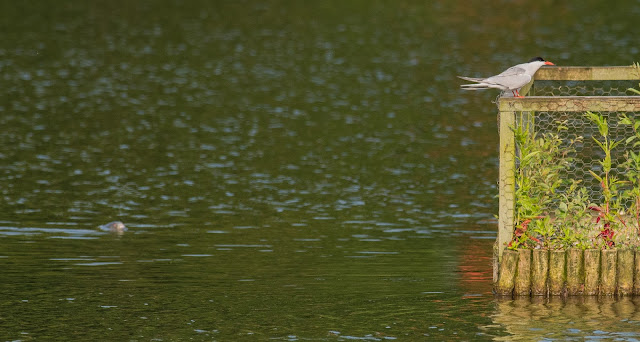 Posted by GeekTeacher at 23:40 No comments:


I recently discovered a not-so-secret location in Anglezarke where Redstarts are known to breed and so this morning I set off to find them.  Parking was easy and the birds were only a couple of hundred metres away along a public footpath.  As is the way with these things, I wasn't sure if I'd be able to find the birds or see them clearly, but to my amazement I spotted the distinctive black and red of the male bird on the old stone wall from at least 50 metres away. 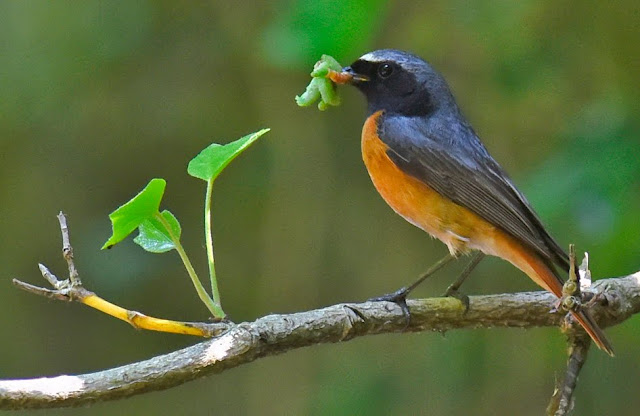 I stopped well short of the bird and soon a female appeared too.  With mouthfuls of insects, it was obvious that they were both feeding young somewhere.  With this in mind I didn't want to get too close, so I approached slowly and placed my camera tripod down about 20 metres away from them. It has to be said that this is trail footpath which is very busy with passing dog walkers and ramblers, some who even brushed the vegetation shown in the photos. 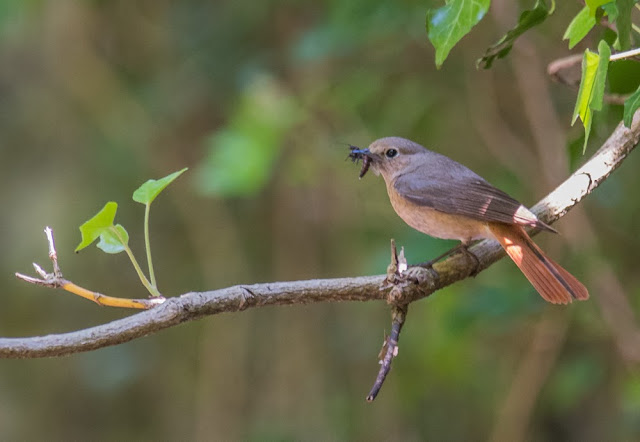 I watched as they followed a familiar pattern of catching the insects on the trail path and then flying to one particular branch before diving into the vegetation.  As they did this quite a few times I decided that the branch was the best place to take a photograph. I moved the camera a little closer and set it to record video while I moved away and left it running. Just before leaving them to feed their young in peace, I took a couple of snapshots on the branch.  It was very dark and shady here and the birds were constantly moving and flicking their tails as can be seen in the video at the top of this page. Together with the low light levels, this made getting a sharp shot difficult. 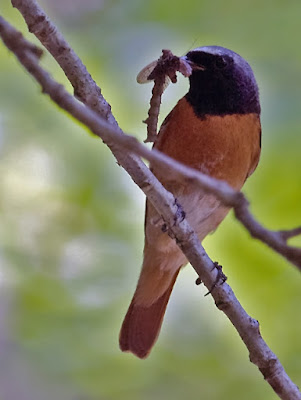 Later I did try to take some shots up in the trees but the light was against me and I am not happy with any of them. However, I was very pleased to have seen a male Redstart in full plumage at last and I may return at a later date when the sun has moved round to a better position.
Posted by GeekTeacher at 20:38 1 comment:

I've just got back from another visit to the Leigh Peregrines site where I saw at least three juvenile Peregrines and possibly four. Three of the juveniles have fledged and I saw them perched on the highest chimney being fed by an adult bird.

Once the adult had fed the two fledgelings on the chimney, it brought the rest of the food, a feral pigeon, to the nest box to feed the other two juveniles. Here's a picture I got on its final approach to the box. 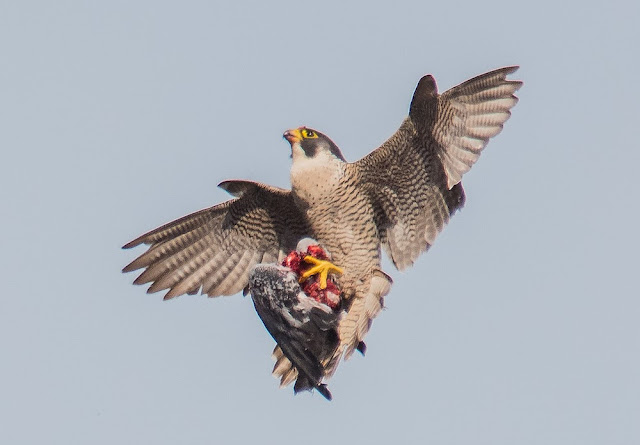 I've had it confirmed that there are four young Peregrines as I thought because two male and two female chicks were rung on 13 May 2016.
Posted by GeekTeacher at 20:28 2 comments:

Note to Self - Catchup

Oh dear, I'm a bit behind as usual. I need to catch up on these photos and reports:

Posted by GeekTeacher at 10:59 No comments:

I haven't been to see the Leigh Peregrines very much this year and so I thought it was time to call in and see how they were doing.  My traditional viewing area over the last few years has been the lane between Leigh Spinners Mill and Bedford High School, but as a car scrapyard has been opened in the area the access here is now very difficult.

So this time I approached from Sanderson's Croft, a small residential area on the opposite side of the mill.  I like to explain to people what I'm doing in their street with a long camera lens and so it wasn't long before I got talking to a couple of people who were working in their front garden.  Another person joined in and everyone was very helpful and pleasant and didn't mind be being there.

Later I spoke to another person who was gardening and finally to a gentleman called Steve, who invited me to stand on his path and view the nest box from his garden.  I didn't get any decent shots on my first visit one morning this week, but the prospects for some flight shots are good with weather being quite decent at the moment.

Here's one of the photographs I took on my second visit one evening showing three young Peregrines on the ledge in front of the box, with possibly another out of sight on the rooftop. 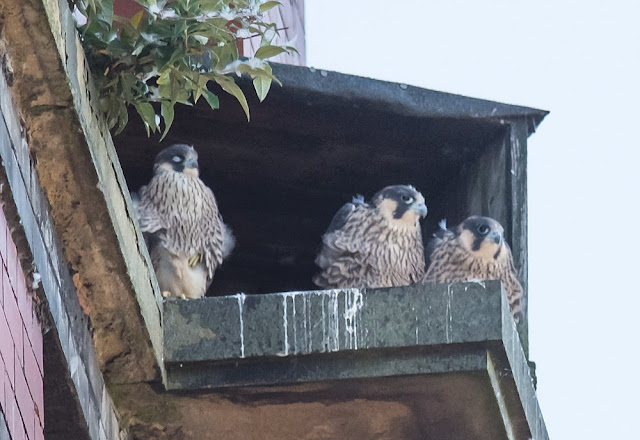 There was plenty of wing flapping going on so they look as if they are about to fledge. I'm not sure if there are three or four young, as it may have been an adult on the rooftop - I'll find out later.
Posted by GeekTeacher at 23:40 No comments: