I need to do some brief posts on the following:

Posted by GeekTeacher at 22:20 No comments: 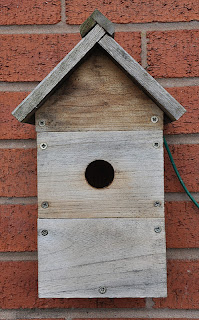 I know I've left it a bit late, but yesterday I cleaned out my nestbox with a camera in it so that we may get some good views of nesting birds again this year.  I had originally intended to clean it at the end of August last year, but as it requires step ladders putting in a neighbour's garden and a climb up on a flat roof, I just didn't get round to doing it before the winter set in. 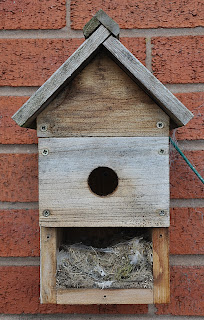 Anyway, spurred on by the fact that it's already been inspected once by a Blue Tit (which hasn't returned for over a week now), I decided to get up there and quickly give it a spring clean.  Fortunately I didn't need to take the whole box down, as unscrewing the two front sections gave me good access to remove the previous nest and disinfect the box.  As the camera looks vertically down on the nest, it was quite good to see the nest from a different angle and work out where the birds had been in the box. 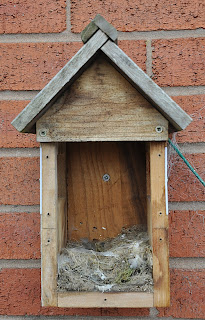 The nest itself was mainly compacted moss and feathers and had a little indentation in one corner where the eggs had been laid and incubated.  There were no signs of any eggshells or remains of chicks that had died, and so the birds had done a good job at removing all the unwanted debris from inside the box.

The floor of the box was very pitted from all the pecking that had been going on in the days before the birds decided to use it for nesting.  They really had removed quite a lot of wood and my guess is that they were testing it for strength, but it might have been part of their mating display. 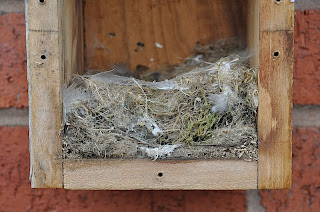 After a quick spray of disinfectant and a wipe out with some kitchen roll, I left the box open for a while to dry out and take in the fresh air.  I also tried to adjust the camera position a little to get a more even view, but it was very difficult to see what I was doing with the TV being downstairs in the kitchen! 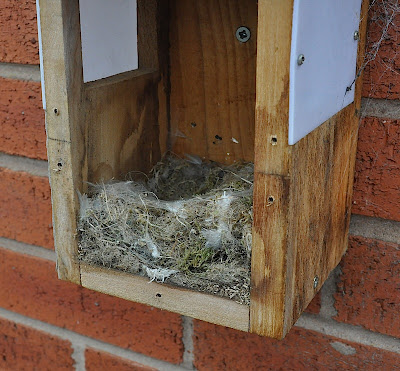 After refixing the front sections, I gave the outside a wipe and brush down to remove a few cobwebs that had been attached to the roof and eaves for most of the winter, and that was that - all ready for the new tenants.  Last year they started nest-building in March with the eggs being laid in April.  So fingers crossed, we'll get something similar this year.  Keep watching for the live nestcam to appear here on my blog. 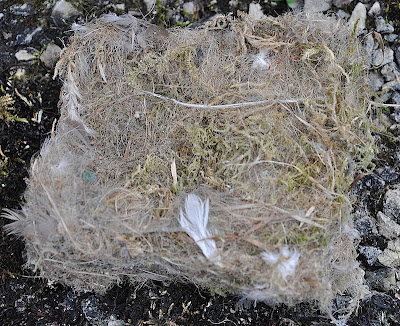 Posted by GeekTeacher at 11:28 No comments:

Following a sighting report by Pete Berry on the Manchester Birding Forum yesterday, I popped out to Astley Green this afternoon to see if I could see the Short-eared Owl.  I was still feeling the effects of a trip to the dentist this morning and a quick spot of birding on a sunny afternoon was just the tonic to help them wear off.

I parked up on Whitehead Lane and, after speaking to a homeowner there, decided I could walk round the locked gates here to the fields at the back of Astley Colliery.  I soon saw a number of people gathered at what looked like the probable viewing location and so I headed for them.  As it turned out, only one was a bider, Mike Baron, and the others were dog walkers interested in what he was doing.

Whilst waiting for the owl to put in an appearance, I chatted to Mike about Risley Moss and the area around Rixton Clay Pits which he knows very well - in fact he'd previously sent me an e-mail detailing what could be seen at different times of the year there. In my rush to get out, I'd left my binoculars at home and only brought my camera and tripod.  So after I'd set it up, I had to rely on Mike and his binoculars for looking into the distance.  A pair of Kestrels and a Grey Heron flew over as we looked.

We were soon joined by Pete Berry who had been the first to report the owl here and later by Pete Hilton.  It turns out that the first Pete had seen the bird in several fields around this area, sometimes down to just 10 metres.  Several Skylarks dropped down into the fields as we chatted about whether the owl had moved on or not. And then suddenly Mike spotted it as it landed on a post.


We had good views of this beautiful bird as it quartered the fields and hopped from one fence post to another.  Unfortunately, except for our first view of the bird, it was mainly flying away from us this evening and it didn't come close enough for me to get a decent photograph.  The best view I had was through Mike's spotting scope where I could see all the detail of it's feathers and that magnificent pair of bright yellow eyes.

Mike however got a great shot with his scope and digital compact camera (i.e. digiscope), much better than I've ever got woth my DSLR camera.  With the power of the scope at 30x magnification and the zoom on his camera, he got a pretty decent full frame shot of the bird which left me wondering if I was using the wrong equipment as the 500mm zoom lens on my DSLR is only 10x magnification.  Below is one of Mike's digiscoped photographs from this afternoon's session.

After an hour or so we decided the bird was not going to reappear any closer to us today and so headed off for home happily having had a good view.  As I got into my car two more birders were arriving and asked for details of where to view it from. And later in the evening Steve Burke messaged me to ask the same question, so I added the details to the Astley Moss map in my Where-2-See Birds website.
Posted by GeekTeacher at 13:49 1 comment:

High Tide at Parkgate on the Wirral

After looking forward to it for a couple of months, today was the day I went to see a high tide at Parkgate on the Wirral.  I'd heard that it can be quite spectacular if the conditions are right, with lots of raptors chasing the many voles, mice, ground-nesting birds and other small mammals and rodents being flushed by the incoming tide.  Unfortunately, to the dismay of the large crowd of birders who had gathered here with the same intention as me, today wasn't to be one of those events.

It was positively grey and drizzly as I set off for the Wirral, but the forecast predicted decent weather and it became progessively better as the day wore on.  When I arrived at the car park on the site of the 'old baths' it was quite sunny, although there was a strong cold onshore breeze blowing into our faces.  I was told that high pressure weather systems (as currently in place over this part of the world) tend to suppress the tide and so we'd have to wait and see how far the 9.9m tide actually came in.  Not very far proved to be the answer.

The best sighting for the day for me came not long after I had got into a good position for observing the marshes - a Spoonbill (which has been here for most of the winter) flew very close by and I got a good view through my binoculars. At first I thought it was the Great White Egret which has also frequented this area recently, but when I looked through my bins its bill was unmistakable. Unfortunately I didn't have my camera out to get even a record shot.

I then went on a short walk down the shore led by two people from the RSPB and as the tide slowly came in flocks of birds could be seen taking off in the far distance, including Shelduck, Redshank and various Gulls through my spotting scope. I went on to to see a couple of ringtail Hen Harriers, a Peregrine Falcon, a Kestrel, a Sparrowhawk and a very distant Short-eared Owl being mobbed by a crow.  And that was about it for the raptors today, although there were also couple of Little Egrets on the marshes as well as plenty of Skylarks singing their hearts out.

Before I'd realised it people were starting to move off and it was over for this hide tide.  I have to admit to being more than a little disappointed that the water did not come further inland and with the number of birds I saw, but there'll always be another time.  And with this consoling thought I headed off up the west coast of the Wirral towards Thurstaston and West Kirby and then along the top through Hoylake and Leasowe towards my final destination of New Brighton in search of a Purple Sandpiper - see the next post for what happened here.
Posted by GeekTeacher at 21:59 No comments:

Now that I'm getting out a lot more often, I've decided that my 'quick visits' will be reported in just one post, rather than have a separate post for each trip.  In the last two weeks I've been to:

If you're wondering about the lack of photographs it's because I'm quite unhappy with the quality of what I'm producing at the moment.  Too see if there's a noticeable difference, I've started taking shots in RAW mode but these take a lot more processing and storage space.  As yet I haven't got anything I think is worth publication, but I will be putting some shots up to go with the write ups on some of the above trips.
Posted by GeekTeacher at 17:08 No comments: